Farah, who coached Jacked at his first Mr. Olympia, talked about the struggles his client endured on his way to finishing eighth at the contest. 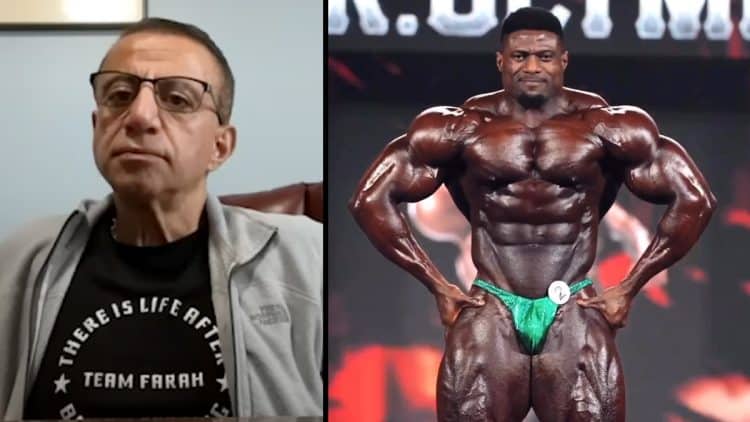 “He [Andrew Jacked] said ‘when I put it together, I’ll be the [Mr. Olympia] but right now, I just want to be the Mona Lisa.’ You couldn’t take your eyes off of him [at 2022 Olympia] because he is [so] pretty,” George Farah shared.

It’s been an incredibly successful rookie season for Andrew Jacked. Guided by George Farah and four-time Arnold Classic winner Flex Wheeler, Jacked kicked off the year by earning his pro card at the 2022 Arnold Classic Amateur in March. His blend of aesthetics, mass, symmetry, and balance overwhelmed the competition.

At his first Mr. Olympia competition, Andrew was tasked with facing one of the deepest lineups in years. Despite that fact, Jacked’s confidence and stage presence were on full display at the annual show. While he wasn’t in the first call-out, Jacked debuted in eighth place, respectively.

Speaking in a recent interview, George Farah opened up about Andrew Jacked’s potential in the IFBB as well as the adversity he faced during the 2022 Mr. Olympia contest. Bodybuilding veterans Chris Cormier and Dennis James also gave their thoughts on Andrew’s successful Olympia debut.

During the podcast, Farah explained that Andrew Jacked was suffering from asthma, bronchitis, and a 102-degree fever on stage at 2022 Olympia.

“Honestly, a lot of people don’t know what goes [on] behind the scenes. Four weeks ago, Andrew [Jacked] wasn’t going to do the show [2022 Olympia]. We were supposed to go to Pittsburgh, and he calls me, ‘George, I don’t want to go and let them see me like this.’ I don’t know what happened because of his asthma and stuff, but now, I said, I kept telling him, I said, ‘listen man, you’re not that bad,'” said George Farah.

Farah said Andrew looked amazing four weeks out but got hampered by health problems leading up to the event.

“Seriously, I’m going to tell you. I’m going to tell you later. Forget about this because really — there was some type of bullshit [going on] back home or whatever. The thing is, for that four weeks he looked amazing. Then, all of a sudden, he got freakin bronchitis. The guy was on the stage probably that’s why I’m coughing. He had a 102-degree fever, what the hell are you going to do with that?

And he still represented and looked good and he’s coughing and stuff and all this you know. To me, it’s a win,” says Farah. “He’s a realistic guy. Because he asked me, we talked about it. I said, ‘listen, you probably — between you and Samson, you [guys] are probably going to be the prettiest guys on that stage.’ Pretty flawless physiques.”

Bodybuilding veterans Chris Cormier and Dennis James agree Jacked finishing his Olympia debut in eighth is a promising sign of what’s to come in the future.

“I think he’s being realistic because he knows he just came to the IFBB. He’s only been in prep the whole year and never [had] time to reassess really and bring a different package as far as like bettering your body, getting ready for the Mr. Olympia. So I thought that was admirable of him and also, I just like [where] his head is at with the whole process and how long it takes,” Chris Cormier shared.

“Look at what he achieved in this very short time — one year. He won his pro card, he won two pro shows, and he placed eighth in his first Olympia in a lineup of 30 guys. Come on,” said Dennis James. “Like George just said, he was sick, he didn’t even want to be there. At the end of the day, that shows how good this guy really is.”

Andrew Jacked had his doubts leading up to the 2022 Mr. Olympia contest. He spoke with retired legend, eight-time Mr. Olympia Ronnie Coleman about the historic show before stepping on stage. During the interview, Andrew shared that he’d been fighting a cold since his win at the Arnold Classic UK in late September.

In that same interview, Andrew made it clear he planned on winning the 2023 Mr. Olympia contest next year, which was announced for the first week of November by Olympia President Dan Solomon recently. According to Jacked, he intends to win one Mr. Olympia title before sailing off into retirement. However, the standout will have to win a pro show now to qualify for next year’s 2023 Olympia.

Andrew Jacked wasn’t in the first-call out at 2022 Olympia like Jay Cutler predicted, but he left Sin City having made a huge statement. After a historic 2022 schedule, Jacked’s eyes are locked on the 2023 Mr. Olympia contest next season.