Despite losing boatloads of money, Schwarzenegger sees the annual Arnold Classic contest as an investment into the sport. 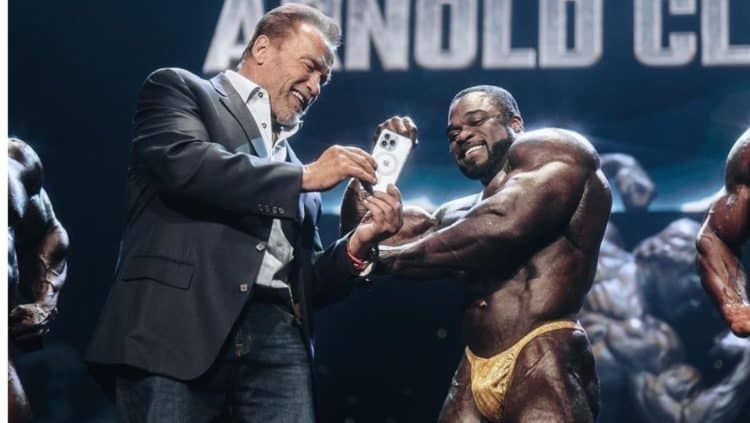 Bodybuilding legend Arnold Schwarzenegger is one of the sport’s most prominent figureheads. Despite losing millions of dollars hosting annual events during Covid, Schwarzenegger sees the financial loss as an investment into the growing sport, according to a recent Instagram statement.

A wave of backlash followed Brian Powers and the 2023 Arnold Classic’s decision to exclude a number of bodybuilding divisions from their next show. Currently, the promoters have decided to move on without Women’s Physique, Women’s Bodybuilding, Figure, and 212 Bodybuilding.

In response to the decision, two-time Women’s Physique Olympia champion Sarah Villegas immediately fired back. Villegas also voiced her frustration with the decision to remove Women’s Physique last year as well. Her division was featured at the show from 2015-2020. In an effort to remedy the situation, Sarah offered to put up $20,000 of her own money to ensure that competitors got a chance to compete at the prestigious event.

In addition to Villegas, four-time Mr. Olympia Jay Cutler also gave his thoughts on the controversy. Joined by manager Matt, Cutler said that the AC promoters made the decision ‘without offering a real explanation.’ Cutler added that the recent decision has created confusion within the bodybuilding community. In Matt’s opinion, the sport wouldn’t be where it is today without Schwarzenegger’s financial sacrifice.

Below you can find manager Matt’s statement which Arnold reacted to in the comment section. The post was regarding the financial loss Arnold incurred by hosting events during Covid.

“That Arnold — and I asked him that number… they lost four million dollars in 2020 when the Coronavirus happened. How much money did Jake Wood lose putting the Olympia on against all odds? If it wasn’t for two extremely wealthy guys that love bodybuilding — where would be right now?

Matt clarified that he doesn’t think the sport would be where it is today, without Schwarzenegger and the Olympia organizers, who opted to host shows during Covid despite losing money.

In a recent Instagram post, Arnold Schwarzenegger responded to Matt, explaining why he looked at the $4 million dollar loss as an investment into the sport.

“Thank you for the kind words. It was an easy choice. I tell people the most important thing you can learn is the difference between spending, and investing. Spending is a loss, but I consider the past few years an investment in the sport of bodybuilding and our fitness crusade. I also know it was a tough time for a lot people financially and the athletes needed that prize money more than I did,” Arnold Schwarzenegger wrote. 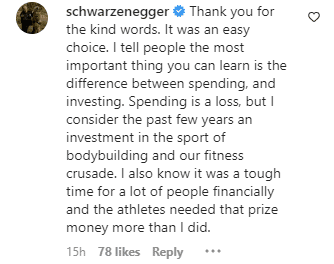 Arnold competed in the Golden Era and admitted in the past that he believes Classic Physique is the future. He also said bodybuilding has become the most dangerous sport in the world, especially for Open class competitors who continue to push themselves to gain size.

Schwarzenegger has always been determined to change the ‘terrible’ reputation of bodybuilding and fitness, which was one of his first goals when he started the sport. The annual Arnold Sports Festival has only grown in popularity since its inception. In addition to bodybuilding contests, the festival plays host to strongman contests and most recently, slap fighting.

Bodybuilding veteran Lee Priest swiftly came to the athletes’ defense following the controversial decision to omit certain categories. Priest holds the Arnold Classic title in high esteem and said athletes would compete at the show even if the prize money was cut in half. He told Brian Powers that the organizers should just leave the contest ‘how it was.’

RELATED: Joseph Baena on Being Arnold Schwarzenegger’s Son: ‘I’m Constantly Pushing Myself to Live Up to That Expectation’

Arnold Schwarzenegger was gracious to Matt for understanding the plight of a promoter. Despite losing money by hosting annual contests, Schwarzenegger looks at it as an investment into the sport rather than a net loss.