It’s been over four decades since Arnold Schwarzenegger won his last Mr. Olympia crown. But, despite this, the Terminator and Conan star is still considered one of the best bodybuilders ever. In this article, we reveal a couple of the workouts he used to sculpt one of the best physiques in history. 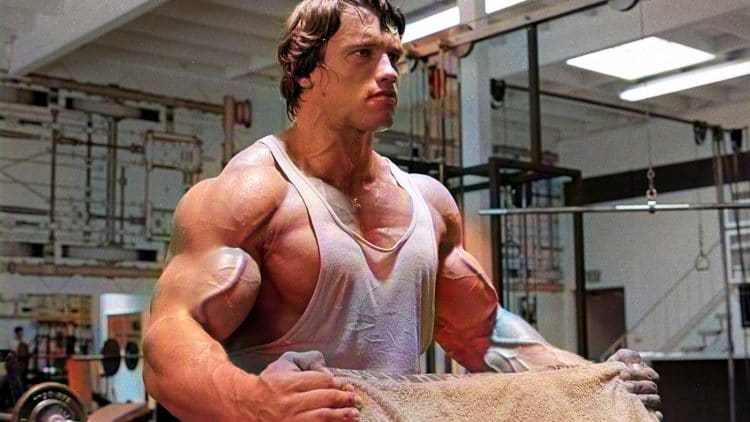 Arnold Schwarzenegger is a bodybuilding legend. He was and continues to be one of the most influential people in the sport.

Movies like Pumping Iron, Commando, Predator, and the Terminator franchise raised the public’s awareness of bodybuilding, and many of today’s bodybuilders owe their careers to Arnie.

He has also put his famous name to various bodybuilding and fitness competitions, including the Arnold Classic and Arnold Sports Festival. Arnie has put a lot back into the sport that gave him so much.

But how did Arnold train? What methods did he use to build one of the best physiques in bodybuilding history?

In this article, we reveal a couple of the workouts Arnie used to sculpt his championship-winning physique. 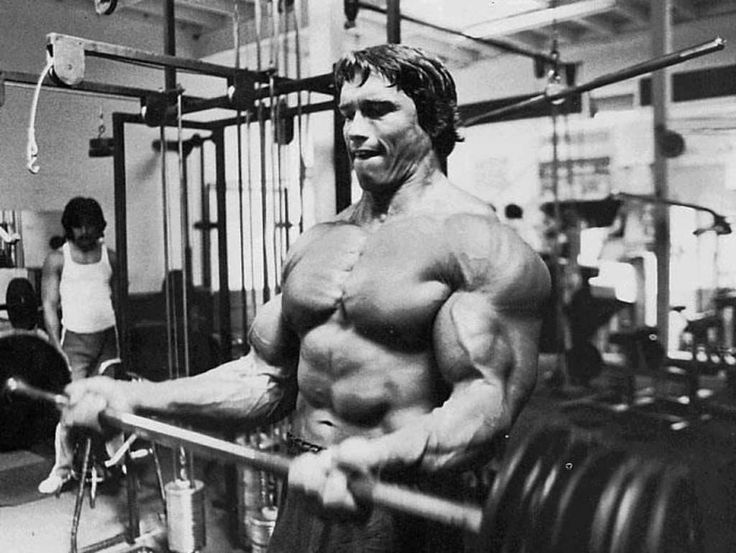 If there is one word that can be used to describe how Arnold trained, it is dedication. He started lifting weights at a young age and was obsessed with building massive muscles. He flirted with Bodybuilding Olympic weightlifting and powerlifting before committing himself entirely to bodybuilding.

Arnold himself has told stories about how he used to go off into the woods to train with logs and rocks – even in the depth of winter – and would break into the local gym so he could train even when it was closed. During his time in the Austrian army, conscript Arnold did pull-ups from the tank he was manning and curls with ammo boxes. There was no stopping him!

Schwarzenegger used a variety of training methods, although most people associate him with high volume split routines. In fact, influenced by one of his idols, Reg Park, he also used full-body routines for building mass – what has since become known as Arnold’s Golden Six Routine.

This simple program was designed to build off-season muscle size and strength. Performed three times a week and combined with a high-calorie diet, this is still a popular bulking routine.

However, after coming to America and turning professional, Arnie started to dedicate more time to training and developed the high-volume approach he became famous for.

After all, he had almost unlimited access to Gold’s gym, plenty of willing training partners, such as Frank Zane and Franco Columbu, and more time to train than ever before. It was only natural that he would gravitate toward longer and more voluminous workout methods. 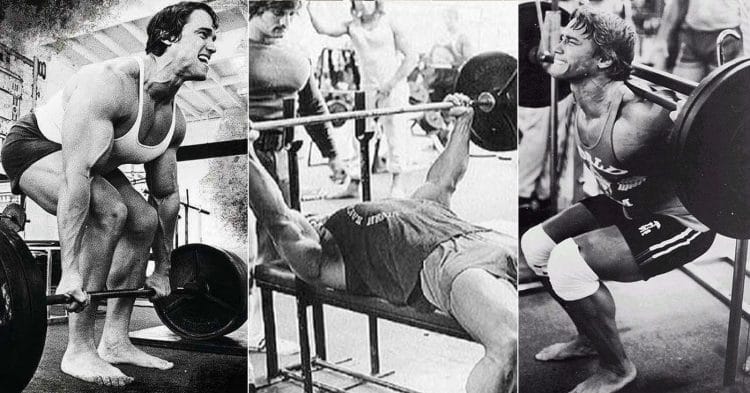 One way he did this was with the classic push-pull-legs routine.

In simple terms, push days are all about working the chest, shoulders, and triceps, while pull days target the back and biceps. Legs get a dedicated training session all to themselves. This sequence was then repeated to create a six-day training week, i.e.,

Each workout lasted several hours and, sometimes, would be divided into a morning and an evening workout, e.g., back in the morning and biceps in the evening.

In addition to the push-pull-legs routine, Arnold would shake up his training and use a different high-volume training split. Like the PPL routine, this workout involved plenty of training volume, and each muscle group was trained twice a week:

To really mix things up, Arnold would sometimes use an even higher frequency approach to training, hitting each major muscle group three times a week. These were marathon workouts that very few people could survive. Needless to say, such a voluminous training approach is not recommended for beginner or even intermediate lifters.

Arnold Schwarzenegger learned from a great many bodybuilding experts, not least his mentor Joe Weider. Weider had many training principles he used to train the champion bodybuilders of the day. 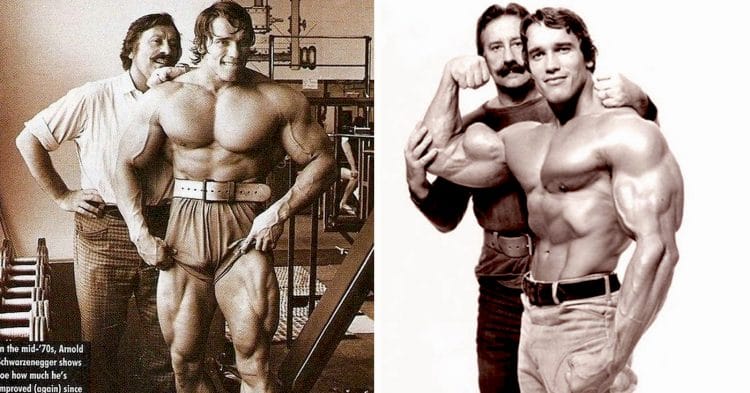 Despite his claims, Weider didn’t invent many (or even any) of the methods he used to build muscle. Still, he was the man who brought them all together and gave them catchy names, such as the Weider Peak Contraction Principle and the Weider Cheating Principle.

With muscle confusion, instead of following an unchanging routine, lifters mix and match the exercises in their workouts to “shock” their muscles into new growth. This could also involve using different set and rep schemes.

For the instinctive training method, lifters were encouraged to adjust their workouts based on how they felt. Got lots of energy? Train harder and longer than planned. Still tired from yesterday? Have an easy workout to recuperate.

This all means that, while Arnold had several favorite high-volume split routines, his actual workouts often varied.

As a result, Arnold did lots of different workouts and often mixed things up based on how he was feeling. He even changed his training plan mid-workout.

Because of this, we can only provide you with an example of the type of workout Arnold would have done. He probably did do this workout, but maybe only a few times. After that, he would have changed it to maintain his progress.

Workout #1 – Chest and back

Read more: Chest And Back Training.

Workout #3 – Legs and lower back

Repeat this three-workout sequence twice, followed by one day off. Continue for 8-12 weeks, and then evaluate your progress. After this period of high-volume training, it may be productive to switch to a low-volume workout, such as High-Intensity Training (HIT), to give your body a rest. 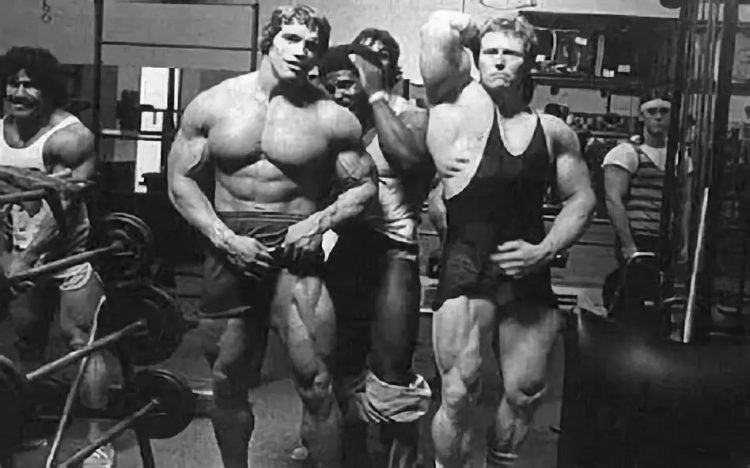 You only have to look at Arnold Schwarzenegger in his prime to see that his high-volume approach to training worked. However, Arnold was also genetically blessed, had exceptional recovery abilities, was virtually a full-time athlete with plenty of time to rest between workouts, and was also using modest amounts of performance-enhancing drugs.

For some people, such a high-volume approach will lead to overtraining and could even cause injuries, muscle atrophy, and regression.

That said, if you are young, experienced, and ready for a challenge, Arnold Schwarzenegger’s volume workout routine could be just what you need to spice up your training and build even more muscle mass.

However, if you do try these workouts, make sure you pay as much attention to rest and recovery as you do training, and support your workouts with plenty of nutritious, wholesome foods. You may also benefit from some bulking supplements.

Bodybuilders don’t come much more famous or influential than Arnold Schwarzenegger. He’s a true legend of the sport and helped turn bodybuilding from a fringe activity to something much more mainstream.

While he used lots of different training methods during his career, he’s probably best known for high-volume workouts lasting several hours. He was also a huge proponent of training each muscle group twice a week.

But, while this approach to training clearly worked for Arnie, it may be too much for many exercisers.

That doesn’t mean you shouldn’t try one of Arnold’s high-volume workout routines. But, if you do, make sure you pay as much attention to your diet and recovery as you do your workouts so you can put back into your body what these workouts will take out.