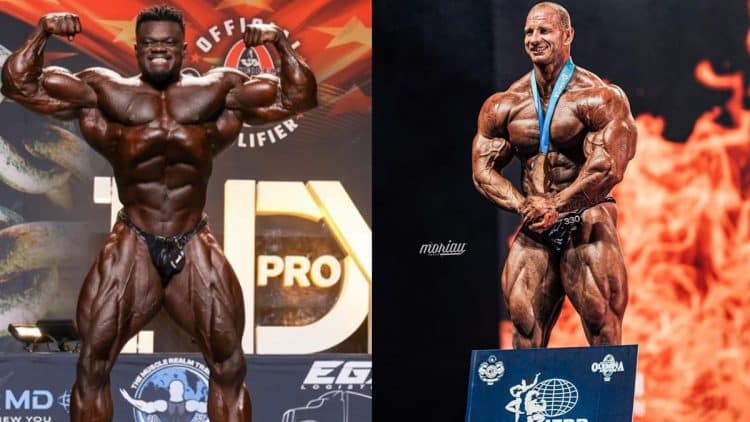 Blessing Awodibu wants Open Pro bodybuilders to derail Michal Krizo’s hype train and defeat him in his first Pro show. Krizo earned his IFBB Pro card by winning overall at the 2022 Amateur Olympia in Rome, Italy on October 8, 2022. However, he has received mixed reactions from his contemporaries as many feel the hype around his name is not real.

Earlier this year, Michal Krizo announced that he will leave the IFBB Elite Pro League to compete in the NPC League. However, since he competed in the Elite Pro League, Krizo had already put in the work that a typical IFBB Pro bodybuilder does. Therefore his win at the Amateur Olympia was mostly seen as a foregone conclusion. Despite this, it is extremely important for him to accelerate his Olympia preparations. Krizo’s physique has already garnered a lot of attention in the bodybuilding industry and many are wondering how he would stack up against the elite competition at Mr. Olympia.

Blessing Awodibu, an outspoken personality and another bodybuilder trying to leave a mark at the 2022 Olympia, is no stranger to rivalries. When Krizo garnered the bodybuilding community’s attention, Awodibu did not want the newcomer to get ahead of him. The Irishman’s remarks received a befitting reply from Krizo and a rivalry took shape even before Krizo earned his IFBB Pro card. However, they are not complete strangers from a competitive standpoint and have competed against each other in 2017. With Krizo’s win at the Amateur Olympia, Awodibu once again got the opportunity to start the one-upping game by exchanging taunts.

“Welcome to the A** whopping league.”

“@brett_wilkin @hollingshead89 Please do the same show this guys is doing. That would be fun to watch, it will be a nice welcome gift,” Blessing Awodibu wrote in the comments.

Awodibu referred to the Open Pro division as the ‘a** whopping league’ in his comment. Krizo will attempt to win the 2022 Prague Pro and earn a direct qualification for the 2022 Olympia. Awodibu invited Brett Wilkin and James Hollingshead to participate in the same show as Krizo as a ‘welcome gift’. This possibly implied handing him a loss in his Pro debut. Wilkin is training to compete at the 2022 Romania Muscle Fest Pro in five weeks’ time. Hollingshead earned his 2022 Olympia qualification by winning the 2022 Tsunami Pro on Oct. 9. Both of them are in excellent shape right now. Their stage presence can give a realistic idea about where Krizo stands in the division. But irrespective of them competing, winning the first Pro show is still a huge task at hand.

Some people pointed out that Krizo’s conditioning was not on point at the Amateur Olympia. However, it can be argued that the Slovak did just enough to obtain the win against relatively easier competition. According to Michal Krizo, he wants to compete in the EVLS Prague Pro show to qualify for the 2022 Mr. Olympia. Three weeks remain until that date. It remains to be seen whether he will be able to deliver excellent conditioning to the Prague Pro contest.