Krizo said Blessing Awodibu 'was shi**ing his pants' against him at the 2017 amateur bodybuilding show: "He [Blessing Awodibu] wasn't expecting to win." 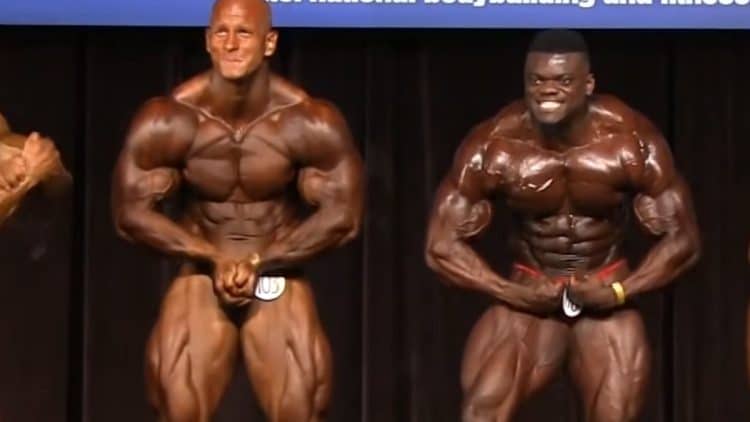 Slovakian mass monster Michal Krizo has already made an impression with bodybuilders in the IFBB Pro League despite having yet to earn his Pro card. In a recent video, Krizo gave his thoughts on losing to Blessing Awodibu in 2017 at an amateur bodybuilding contest.

Michal Krizo made the switch from the IFBB Elite Pro League to the NPC earlier this year. It didn’t take long for veterans and legends of the sport to notice his jaw-dropping physique. He boasts incredible proportions with a full chest and massive arms.

His first stop saw him visit one of the sport’s sharpest minds in Milos Sarcev. The 2021 Mr. Universe Pro winner impressed Sarcev at the Dragon’s Lair Gym in Las Vegas. Sarcev said that Krizo will have a major impact on his new bodybuilding league if he earns a Pro card.

From there, Krizo traveled to see four-time Mr. Olympia Jay Cutler, who was also taken aback by Krizo’s shape and size. Cutler immediately labeled Krizo as dangerous and said he has muscle striations in his shoulders that remind him of bodybuilding legend Phil Heath.

Another standout in the Men’s Open division this year has been Blessing Awodibu. He proved himself in the IFBB Pro League by winning back-to-back contests, which included the 2022 New York Pro and Indy Pro titles.

Weeks ago, Awodibu antagonized Krizo by posting a throwback photo of the last time they battled on stage. While his NPC debut is just days away, Krizo is reliving the close defeat he endured to “The Boogieman” back in 2017 at an amateur bodybuilding show.

Michal Krizo on Losing to Blessing Awodibu: ‘He Wasn’t Even Expecting to Win’

In a recent “Storytime with Krizo and Coach,” the 32-year-old shared his thoughts on losing to Blessing Awodibu back when he was a rookie in 2017.

“The amateur contest where Blessing Awodibu beat me. He [had] been competing for a long time already. I think he also won like four contests overall that season. But he was shitting his pants. I was a complete rookie, first competition season, and already competing at the Diamond Cup in Ostrava. He wasn’t even expecting to win,” Krizo explained.

Krizo maintains that it was a close contest, and he was still learning how to pose properly without expending too much energy. At the time, Awodibu brought a more conditioned package, but Krizo says he’s ‘a level ahead’ of him now.

“I had a better physique, but I couldn’t pose so well. Blessing posted [a picture of this show] on his Instagram, one of these days.. have you seen it?” asks Krizo. “He posted a photo of him and me. Welcoming me in the IFBB and saying that I can expect to lose against him again. I responded — ‘I am already a level ahead of you.’ It’s all fun.”

While a battle with Krizo and Awodibu would make for fireworks, first Krizo has to earn his Pro card. He revealed that his current plan is to enter and win the 2022 Amateur Olympia Italy contest this weekend. If he’s successful in that endeavor, he intends to punch his ticket to 2022 Mr. Olympia in the same month at the upcoming EVLS Prague Pro.

In preparation for his show in a few days, Krizo has kept fans updated on his progress. He recently shared a back-building training session. After the taxing workout, he practiced posing in the company of his coach. With plans of being as big as possible, Krizo is confident he could shake things up at 2022 Mr. Olympia, assuming he finds success at his next two contests.

Some in the community have suggested that Krizo will win Mr. Olympia on his first try, but he still has a few obstacles standing in his way. Should Krizo claim titles at the 2022 Amateur Olympia Italy and the Prague Pro, fans can expect an intense battle against Awodibu when the two meet for round two.