Former Mr. Olympia Samir Bannout on Michal Krizo's recent move into the NPC: 'I think this guy has advantages over Nick Walker. I don't see any weaknesses.' 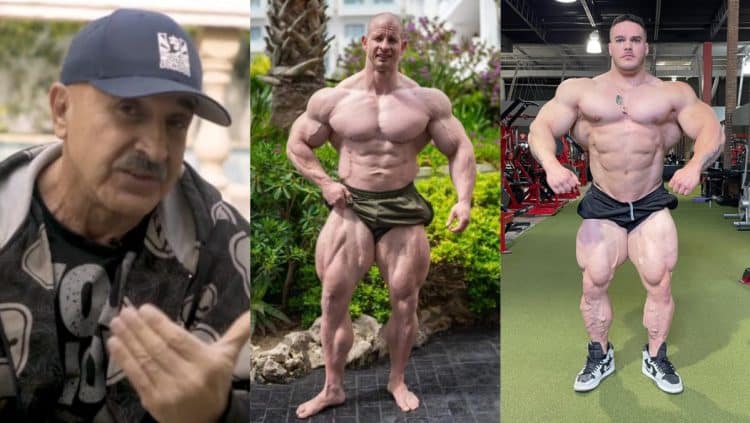 Bodybuilding veteran Samir Bannout has an eye for talent given his storied career and success in the sport. In a recent video, Bannout reacted to mass-monster Michal Križo making his way into the NPC and named him as a viable threat to Nick Walker at 2022 Olympia.

Samir Bannout, a 1983 Mr. Olympia champion, reached the top of the sport during the Golden Era of bodybuilding. He’s competed against legends like eight-time Mr. Olympia Lee Haney as well as one of the godfathers of aesthetics, Frank Zane. Despite stepping away from the sport, Bannout has remained engaged in his former profession.

IFBB Elite Pro Michal Križo recently announced his foray into the NPC and the IFBB Pro League. Given his monstrous build, many believe he has a high ceiling as a bodybuilder. Križo sports some of the biggest biceps around, prompting fans far and wide to discuss how he will do in the Olympia should he manage to win a pro show. Križo’s size is one of his best weapons, similar to bodybuilding star Nick Walker.

“The Mutant” took the world by storm last year with freaky muscle mass and grainy conditioning. Walker led a historic rookie season, starting with a first-place victory at the 2021 New York Pro. One win wasn’t enough for the 27-year-old. He brought arguably his best package to date at the Arnold Classic in the same calendar year and won the show handily. The New Jersey native garnered even more hype following a fifth place performance at 2021 Mr. Olympia in his debut at the prestigious event.

Bannout believes Križo could potentially challenge Nick Walker on the Olympia stage, but first, the Slovakian titan needs to qualify for the event. Currently, his goal is to do a pro qualifier and then compete at the Prague Pro, which takes place on October 29, 2022.

There are a number of opportunities for the bodybuilder to earn his pro card. Athletes will have a chance at several bodybuilding events that take place over the next few months. With those lofty goals on his agenda, Bannout gave his thoughts on Križo’s trajectory in the sport and his physique.

Samir Bannout on Michal Križo: ‘This Guy Has Advantages Over Nick Walker. I Guarantee He’ll Make Top Three if He’s in Condition’

In a recent episode of the Muscle Maturity Podcast, Bannout spoke about some of the advantages Križo currently has over elite Men’s Open competitor Nick Walker.

“When I was going to compare his [Michal Križo’s] arm, it’s bigger than his head. His arm is bigger than his head. I mean, this is unbelievable. I’ve never seen anything like that in my life. I mean, I don’t know what he’s doing. Obviously, I hope he’s in good health. I hope he’s doing it right but I’m pretty impressed by his size and he flows pretty good. So, I don’t know. I’d like to see him in person. He’s got diamond calves, very good thighs, his arms are beyond incredible, his shoulders… this guy really is no bullshit, he’s amazing.” Samir Bannout shared.

Bannout said he doesn’t see any weaknesses on Križo’s physique.

“Well, again, let’s go back to Regan Grimes. If this gentlemen comes in, if Mike [Krizo] comes in shredded, I don’t see much weakness. I think his arms are too big. He needs to lose a little bit of size. No. I mean, this guy is amazing, I don’t know. Look at his midsection, it’s not bad.” Sami Bannout told Nick Trigili and Hansen.

John Hansen, a fellow guest of the podcast, agreed with Bannout and said that he could Križo being a part of the first call out if he enters Olympia in shredded condition.

“If he’s in top shape, yeah he might get a first call out, depending on what everybody else looks like. If he’s really ripped and he really pops when he poses, then he could.” Hansen explained. “His legs are insane.”

“I think this guy has advantages over Nick Walker because his V-taper and his arm is actually bigger than Walker. Look at the diamond calves and the knees… I mean, he’s put together right. I’m totally surprised that someone so massive and to still have the flow. This is crazy.” Bannout said.

Even though Križo weighs around 270-pounds, Bannout underlined the flow of his physique after explaining that his midsection is still on point.

“He has to weigh about 265-270, has to be. And you said he’s 5″11′. Look at him, you can see the Christmas tree, and the rear delts.” Bannout continued. “Honestly, I’m impressed but then again, he’s oversized and huge and he doesn’t look, I don’t see anything ugly in his middle. I don’t see any potato in the middle. Hopefully, he’s in good health and wow, he’s going to be tough to beat if he’s shredded. His body flows. Look at his delts, his arms, I don’t see weaknesses really.”

The former Mr. Olympia was so confident in his assessment of Križo, that he guaranteed the Slovakian bodybuilder would place in the top three at 2022 Olympia if he came in proper condition.

“I guarantee you he’ll make the top three if he’s in condition, easily, easily from the first try.” Bannout added.

Nick Walker and Michal Križo have a history. Following Walker’s victory at the 2021 Arnold Classic, Križo said that he didn’t look at Walker as a ‘rival.’ He argued that Walker lacked symmetry to his physique, though he eventually apologized for some of the comments he made.

As it stands, Walker is qualified to compete at the upcoming Olympia contest. Meanwhile, Križo just began his campaign for Olympia by switching over to the NPC. Bannout has an eye for top talent in the sport and sees Križo being a unique challenge for Nick Walker in the months to come.