Blessing Awodibu Reacts To His Pro Debut, Vows To Be ‘Ready To Battle’ At NY Pro

Blessing Awodibu gives his reaction to scoring third place in his pro debut at the 2021 Indy Pro, and previews his next appearance at the New York Pro 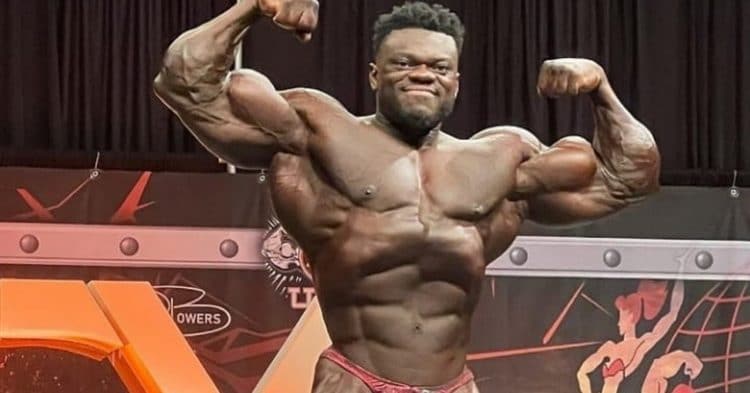 Bodybuilding and Instagram star Blessing Awodibu may not have gotten the result he wanted from his pro debut. However he now feels that he knows exactly what it will take to get a win in his next outing, at the New York Pro this weekend.

It had not been since 2017, that Awodibu stepped foot on a bodybuilding stage. While he had initially taken time away to work on his physique, other factors interfered with his planned pro debut, keeping him sidelined longer than he intended.

Nevertheless, that debut was finally set for the 2021 Indy Pro. Although in the lead to the contest, he made it clear that not only was he pumped to compete for the first time in four years, but he planned on competing again the very next weekend at the New York Pro, whether he won or not.

In the end, Blessing Awodibu came in third place, which was not high enough to landed that coveted invitation to the 2021 Mr. Olympia. All in all, he looked pretty good on stage, but did not have the type of performance he needed to be successful during prejudging.

Taking to Instagram after the contest, Blessing made it clear that he knew where he went wrong at the Indy Pro. Moreover, he vowed that these mistakes would not be made again at the New York Pro, this weekend.

“Posted a video last night but it got messed up by Instagram 🤷🏾‍♂️.
This pic was taken just before tanning but anyway, I just wanna say thank you to everyone for tuning in, think we set a record yesterday for the the live stream 💯🙏🏾.
Also thank you all for all the love and support, it truly means a lot 🙏🏾,” Awodibu wrote.

“Shoutout to @[email protected]_bowers @ifbbindypro for putting together an amazing show .
Yesterday’s show was a try out before the main event – NY pro! Having been away from competing for 4 years, stepping back on stage is extremely hard, to nail peaking and timing.
Yesterday we learned a ton, we messed up pre judging and we knew exactly what went wrong , we tried to fixed things but it was a lil too late. Still we were able to move up in placing.
We will be ready to battle at the NY pro
Stay tuned it’s gonna be epic 💯 Big shoutout to @justindifbb he brought it yesterday. Well deserved win but I’ll see you again next week”

There will be a lot of stiff competition for Blessing Awodibu at the New York Pro. Not only will he be facing Justin Rodriguez again, who won the Indy Pro, but he will be taking on his online rival Nick Walker, as well as other top bodybuilders including Hassan Mostafa.

It is unclear how much more Blessing will be able to improve in just one short week, but it is not impossible that we will be seeing a more peak package from him. Time will tell if he can get his first pro victory this weekend.

Blessing Awodibu is one of bodybuilding's brightest prospects on the rise, especially after the season he registered thus far in...

One of bodybuilding's biggest stars, Nick Walker is currently in the heat of off-season preparations for his second appearance at...