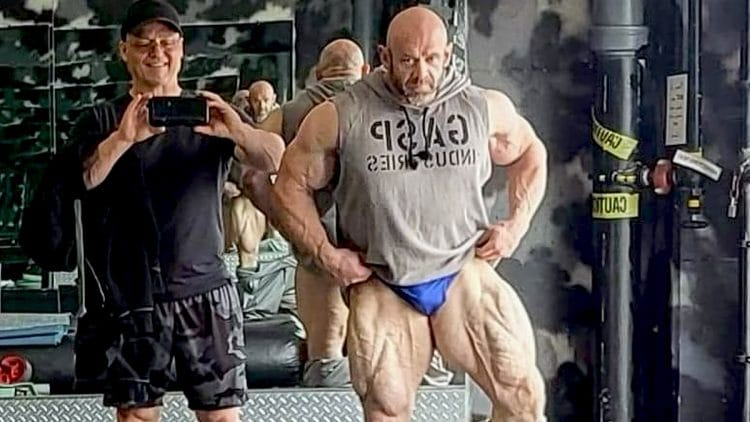 Men’s Open competitor Branch Warren was a perennial contender throughout the 2010s, mostly because of his muscularity and granite conditioning. In a recent update made on social media, Warren revealed his current physique, highlighting his spectacular lower body.

A veteran of bodybuilding, Warren quickly rose to the top of the sport during his heyday. Some of his most notable victories came in 2011 and 2012 at the Arnold Classic. In addition to his Arnold Classic titles, Warren qualified and placed at the annual Mr. Olympia contest a number of times, though unfortunately, he was never able to capture the Olympia crown during his respective career.

In 2009, Warren came incredibly close to winning the most prestigious title in the sport. He took his massive physique to Olympia that same year, and while all signs pointed to victory, he was defeated by four-time Mr. Olympia Jay Cutler. The loss was hard to deal with because Warren earned runner-up and placed higher than Dexter “The Blade” Jackson, who captured his lone Sandow trophy in 2008, a year earlier. For Warren, the second-place performance at 2009 Olympia was a difficult outcome to accept.

Warren, a decorated professional, decided enough was enough and retired from bodybuilding in 2015. Despite taking a step away from the competitive landscape, he still maintains an incredible build and pushes the pace when it’s time to train.

In a recent post made on Instagram, Warren shares a picture of his physique and clarified that it was taken last week.

“Still grinding!! This is throwing it back to last week in San Diego” Warren shared.

Speculation mounted in 2021 after fans questioned if he was preparing for a bodybuilding return, though he made it clear then, that he had no interest in returning. Nevertheless, his decision hasn’t stopped fans from fanning that fire, hoping that one day he gets the itch again to come back to a competition.

As it stands, Olympia President Jake Wood gave the green light for Masters Olympia in 2023, adding that it will ‘definitely’ happen by next year. It remains unclear what the age bracket would be for the potential show, but many believe Warren would be a suitable addition to the roster, if/when that show returns. During its course, Masters Olympia ran from 1994 to 2003, and then again in 2012. The last winner of the show was Dexter Jackson.

RELATED: Branch Warren: ‘I Never Should Have Beaten’ Phil Heath And Kai Greene

Warren has made it clear he has no intention of returning to competitive bodybuilding. During his time away from the sport, he has refocused his efforts on kickstarting a beef jerky company called Wicked Cutz Jerky. Highlighting the lower body that saw him reach the podium during his prime, Warren looks incredibly conditioned despite no longer competing professionally.

7 Reasons You Aren’t Getting Stronger

Seth Feroce: Open Bodybuilding Will Be Gone in 5 Years