The 2019 Mr. Olympia champ did a Q&A with Shawn Ray and Bob Cicherillo in Arizona where answer some questions about upcoming events and competing at the Olympia. 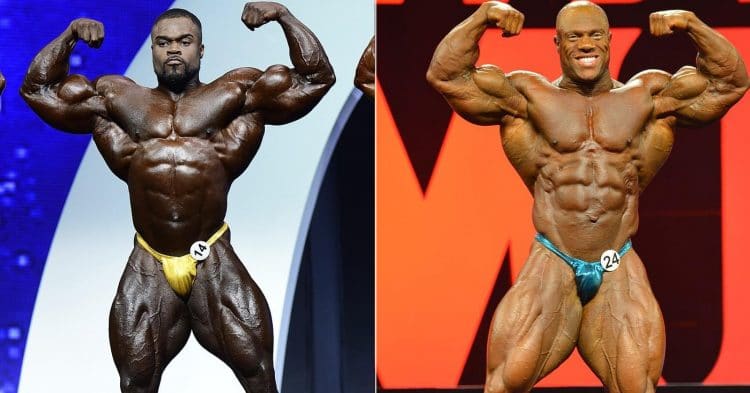 The current Mr. Olympia Brandon Curry flew out from his home of Tennessee to the Olympia headquarters in Arizona to do a live question and answer session. He was interviewed by the legendary bodybuilder Shawn Ray and Olympia host Bob Cicherillo.

Below, we provided the questions for Curry’s and a summary of his answers with some direct quotes.

The interview started off with Shawn Ray, then Bob Cicherillo joined in on the conversation and they both asked a variety of questions.

What’s in the works for you?

Curry explained that they’ll be having a seminar at the Carbon Culture gym for the residents who want to compete this summer. The Tennessee State show is coming up and will hopefully take place on August 8 if things go as planned due to the current situation. They just want to get the athletes motivated, and give them advice during the preparation.

It’s something to bring positivity to the community and NPC as things begin to hopefully return back to a somewhat normal.

What do you do for those arms?

Ray brought up the fact that a lot of people talk about Curry’s big arms and so it made sense to ask about his strategies.

“I keep it simple. how many ways can you do a curl,“ he said. He does 3-4 exercises and typically 3-4 sets to get some blood in his muscles. But he also advises against training really heavy with the arms as it can eventually cause tendonitis due to the excessive stress on these smaller muscle groups.

How many exercises do you do on arm day?

Again, Curry said that he only does 3-4 exercises. “Arms for me is not something I’m really just trying to push the progress on“. He mentioned that his arms have always responded well to training and he doesn’t believe in overkill.

Plus, there’s a lot of crossover work from the bigger muscle groups. For example, chest training will work the triceps while back training works the biceps pretty heavily. So, there’s no need to do much more other than what he currently does for arms.

“I don’t want my arm training interfering with any of those other muscle groups.”

Then Bob Cicherillo entered the room and surprised Curry of which they began to have a conversation. Curry explained how he’s excited about the season getting started.

Chicherillo asked if he has a target on anyone (competitors) and if he’s hoping for anyone to come out of retirement. “I think the target is on me. If they come or if they don’t come, the target is still going to be on me“. But Chicherillo brought up Shawn Rhoden, Phil Heath, and Kai Greene coming back.

“As an athlete, as a fan of the sport, and as a competition myself, of course you want to compete against guys who are going to up your game”. Curry admitted that he’d have to really step up to the plate and that you can’t slack with these guys.

They then talked about how competitive Dexter Jackson is and how he’s always the most vocal one on the stage. Curry admires that about him and believes that is what has kept him in the industry for so long. But Chicherillo mentioned that this is Jackson’s last Olympia and how he’s probably more motivated than ever as a result.

“We’re going to send him out gracefully,” said Curry jokingly, as they both laughed. But at the same time, he was serious and explained that it’s going to be sad seeing Dexter Jackson retire as he has chased ‘The Blade’ throughout his career.

But Big Ramy and William Bonac will likely be competing too and Cicherillo was curious if he was worried about anything that Bonac brought to the table. Curry didn’t hesitate to praise Bonac’s consistency and he admitted that before anyone can say they’re coming for the title, he has to focus on Bonac first.

Hadi Choopan is another competition to be worried about and was also briefly mentioned as someone who’ll definitely bring it to the Olympia stage.

What is your body weight?

Shawn Ray then asked Curry how much he’s weighing as he was “looking like a monster”. But the champ was humble as usual, saying that the camera is probably making him look bigger. He currently weighs in the 260s which is definitely pretty large. Of course, he’s a bodybuilder so the muscle mass will always make him look insane especially if he doesn’t put on too much weight during the offseason which he acknowledged.

Do you know how big your arms are?

For those wondering how big this behemoth’s arms are, he mentioned that he only gets them measured to be fitted for his suits. However, his arms are relaxed during this process and not flexed, which is how arms are usually measured. But they’re still a massive 21 inches relaxed.

Who is your favorite bodybuilder ever of all time?

Curry says he admires many athletes for different things. But when it comes to pure dominance and someone who came out of nowhere, his answer was 8X Mr. Olympia Ronnie Coleman and a million others would definitely agree with him.

But he also mentioned legendary Flex Wheeler for god-given talent and Shawn Ray for performance. And he made a good point. He said that if you center yourself around one person you’re missing out on the spectrum of what the sport is all about because you can pull from so many guys.

Out of all the Olympia champions, who had the least amount of weaknesses? Who was the most complete?

Curry’s pick was none other than 7x Mr. Olympia champion Phil Heath .

Do you eat fish?

Curry says he eats fish as it’s an easy source of protein and fats when he lowers his calories in the final phases of contest prep.

How many calories do you eat in a day?

Curry doesn’t know exactly how many calories he eats a day but he fluctuates carbohydrates.

What exercises do you stay away from?

What he meant was that he doesn’t start with these lifts that are often done with heavy poundages. But he’ll do them after he’s warmed up maybe near the end of a session where he’s not trying to focus on lifting really heavy.

Is there a message in your career that you want your kids to learn from what you’ve accomplished and what you’re working on?

Curry’s message here was that we all have god-given talents and abilities. And when we realize that and pursue what we’re good at, there are going to be lots of battles and it’s up to us to not quit when things get difficult.

This is pretty much what he teaches his kids.

They wrapped up the interview with Curry explaining what his plans are for the upcoming Mr. Olympia. Bob Chicherillo offered some simple advice to the champ… “don’t reinvent the wheel“.

“We’re going to go out there and make sure we bring that package to the stage really really crisp,” said Curry. We don’t have to do anything necessarily new  The body is maturing year by year on its own. That’s what people have been seeing over the years, that maturity, those years of training compounding over and over again. We’ll just continue to push and bring that package but we don’t want to be stupid.”

“Because the last thing we want to do is do something crazy and then ruin the whole process.”

But then apparently Phil Heath sent in a message that Cicherillo read while they were wrapping up that read, “tell Brandon he’s got no shitting business being on my stage“.

So Curry came back with…

“You know Phil, I just say I’ve been hoping to battle with you for a long time. So if you’re ready to come to the stage man I’m all for it. It would be an honor to stand on stage with Phil Heath and battle it out.”

But it wasn’t over just yet. Heath also wrote, “there’s nothing wrong with being a one time champ”.

“And he’s right,” responded Curry. “There’s nothing wrong with that, but remember, I expect you, if anybody, to come to stage it’d be an honor if you make me a one-time champ.”