Phil Heath Explains How to Defeat Chris Bumstead at 2022 Olympia: You Need a ‘Full Back,’ Conditioning, and ‘Flow’ 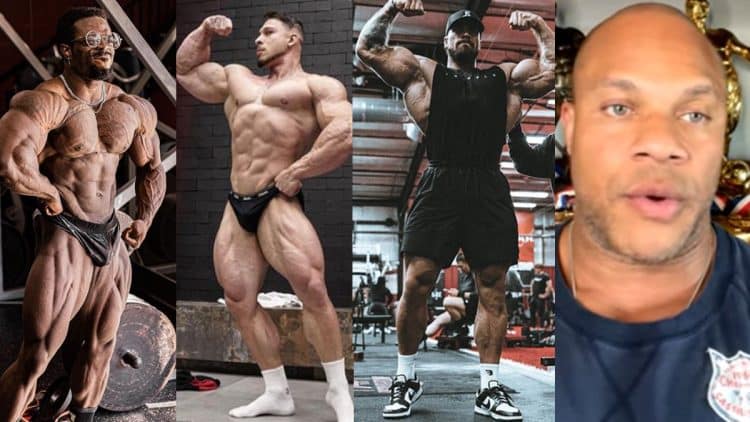 “If you come in there with the best front double bicep or the best side chest they’ve seen in that division ever, then you’re probably going to push the champion to possibly lose,” Phil Heath shared while discussing Chris Bumstead’s chances at 2022 Olympia.

‘CBum’ will face a slew of threats this year at the 2022 Mr. Olympia contest, which takes place in just two days. Bumstead, who won the crown back in 2019 from Breon Ansley, has remained champion and defended the Classic Physique Olympia title back-to-back in 2020 and 2021. He plans to secure his fourth Sandow later this week and his physique updates leading up to the contest have been promising.

Terrence Ruffin was runner-up to Bumstead at the last two Olympias and is determined to get his revenge. He’s trained diligently during the off-season and recently won the 2022 Arnold Classic — a show that saw him defeat rising stars Ramon Rocha Queiroz and Urs Kalecinski. They will also be vying for Bumstead’s title this week.

Unlike previous years, Chris and Men’s Open talent Iain Valliere stopped working together leading up to the 2022 Mr. Olympia contest. While the change spurred doubt amongst his fanbase, Bumstead put those worries to bed after teaming up with Hany Rambod.

Rambod is a respected coach in the bodybuilding community and helped train a ton of athletes, some of which include Phil Heath, Jay Cutler, Derek Lunsford, Hadi Choopan, as well as popular Men’s Physique competitor Andrei Deiu.

Ahead of his scheduled title defense, Bumstead is more motivated than ever to win another Olympia show. Given the huge target on his back, Heath discussed what it would take from the contenders in his division to defeat him.

Speaking on the Rx Muscle YouTube channel, the seven-time Mr. Olympia shared how difficult it would be to knock Bumstead out.

I can only imagine what him and Hany [Rambod] are going to do. It’s going to be very hard to knock that champ out. Now I will to say… Urs [Kalecinski] is knocking on the door.

I saw what he looked like the other day, I was like, ‘holy smokes, this shit is nice.’ But what’s crazy is so is Breon [Ansley]. Breon looks fuc**ng dope too. So, it’s interesting,” said Phil Heath.

Heath said guys like Breon Ansley may struggle to defeat Bumstead due to the height/weight cap for Classic Physique.

“Chris is kind of an anomaly in this division because his height and weight — he’s not capped on the weight side of things. He could actually what weight another four or five pounds. He has more room for improvement whereas these other guys don’t. Like with Breon, he’s tapped out. He can only refine so much and if they don’t praise him for it, then he has to move up a category or whatever.”

Heath Shares Recipe for Beating ‘CBum’: You Need ‘Conditioning, Flow, Presentation and a Full Back’

Phil Heath laid out the blueprint for defeating Chris Bumstead. He specified that contenders like Ramon Rocha Queiroz, Terrence Ruffin, or Urs Kalecinski would need to have a full back, presentation, flow, conditioning, and a power shot, which he described as a specific pose that someone is best at.

“Dino [Ramon Rocha Queiroz] from Brazil, like this is an opportunity for him to make a name. He already has a name but in order to beat Chris you have to have a full back, no question about it. It has to start from the hips on up. You have to have lat sweep because he developed a little bit of that as he went on. Your conditioning has to be on point.”

According to Heath, big arms aren’t a must in Classic physique, but again stressed the importance of dominating one specific pose, like a front double biceps per se.

“You don’t necessarily have to have the biggest arms because he doesn’t, and he still beats everybody. He has better flow than everybody. He has presentation, the confidence — so these guys have to know going in that you have to develop a power shot.

There has to be a shot you know, like Terrence Ruffin or whoever it is, like, this pose [has to be able] to beat anyone in the world. If they can’t answer that question. If they’re on a press conference, and they’re asked, ‘what pose do you have no bullshit where you beat everyone in the world in your division?’ If they don’t have one, you’re not going to win,” says Heath.

Earlier in the season, Brazil’s Queiroz, who finished fifth at 2021 Olympia, promised a big surprise for the reigning Olympia champ Bumstead. During the Olympia TV interview, Ramon suggested that Chris might struggle with the size and quality of his arms, which the champion has identified as one of his weak points in the past.

Heath acknowledged that any champion is beatable, but the former Mr. Olympia believes Bumstead has a huge advantage considering he’s held the title since 2019. Despite the uphill battle, the bodybuilding legend isn’t counting out Ruffin, Queiroz, or Kalecinski at the 2022 Olympia event.