The Strongman pair teamed up and trained bench press, rows and some accessory work. 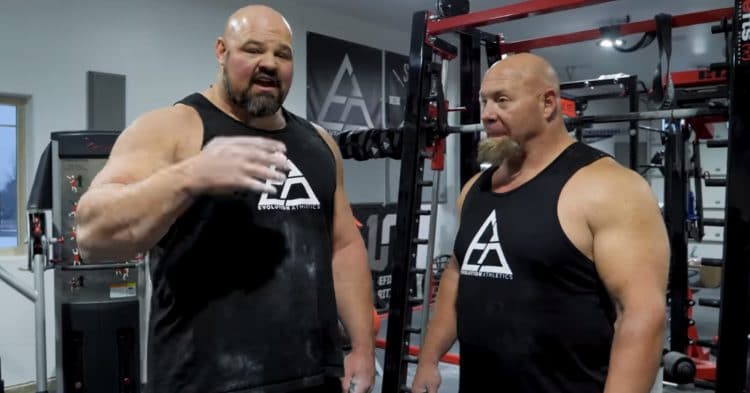 Courtesy of Brian Shaw YouTube Channel, you can watch the video here:

Brian and Nick are no strangers to each other. They have competed against each other many times and trained together even more times. They also filmed a TV show called “The Strongest Man In History”, where they were joined by Eddie Hall and Robert Oberst.  All of their experiences make for an interesting interaction between them.

Before doing some heavy lifting, the duo had to warm up. To get ready, Brian and Nick did 4×25 of lat pull-down, 4×25 of dumbbell bench press, and 4×25 of triceps rope extensions.

For the first part of the workout, Brian and Nick combined the bench press with seal rows. It is important to note that the pause between the sets was on a strict time cap. Their repetition range was 8 reps on the seal rows, and 5 reps on the bench press. They also did 5 sets of each exercise, progressively upping the weight.

“Wow, those are brutal. Kind of like that, that’s a whole new kind of fun,” said Best.

Brian did not reveal the exact weight at any part of the video, but he loaded his first set with two 45 lbs plates and a smaller unidentified weight, on each side (approximately 245 lbs). As you would expect, the duo did the set explosively and with ease, and headed back to the rows.

For the second set, they added a few more unidentified smaller weights (approximately 300 lbs), but it still wasn’t demanding for them. After finishing the third round of rows, they upped the weight even further on the bench. They added another 45 lbs plate on each side while taking off one of the smaller plates (approximately 350 lbs). Brian continued quickly lifting the bar, but at this weight, a bit more effort was required from Nick.

After finishing the fourth set of rows, Nick Best made a joke about his lat injury from last year.

“Would never know that I didn’t have a lat eight months ago,” said Best.

“Testing the recovery a little bit. I love it,” replied Shaw.

Brian continued with the same weight in the fourth set of bench press, and still was pushing the weight like it was nothing. Nick lowered the weight around 15-20 lbs, as fatigue was catching up to him. He did three reps alone, but Brian had to assist him in the last two reps.

“That is failure… My triceps are feeling it,” said Best.

After finishing the last set on seal rows, Brian was impressed by Nick, and even praised him a bit.

“That’s kinda how Nick works. He says he’s gonna stop and never stops. That is one of those qualities that Nick has,” said Shaw.

Even after many exhausting sets, Brian upped the weight even further. He added one more 45 lbs plate on each side (approximately 435 lbs). He pumped out 5 reps like it was nothing.

Even Brian realized how easy that was for him, so he added a bit more weight (approximately 475 lbs), which he did for 3 reps. Nick said what we all think after seeing Brian do that.

“For him to do that after all that volume, it’s kind of scary,”

And for the heaviest single of the workout, Brian Shaw loaded five 45 lbs plates and a 2.5 lbs weight on each side (500 lbs). Brian then hit a quick rep, which looked so easy that Nick expected him to do more reps.

The training was not there, as Brian had a few more volume exercises planned. To finish it, they did a set of 25 repetitions for each of the four exercises. They did cable shoulder shrugs, lateral dumbbell raises, front dumbbell raises, and cable rows.

At the end of the video, they had a very wholesome moment with each other. Nick pointed at 4 WSM win shirts which are hung on the wall and alluded to a fifth win.

“I have been in every one of those, and I want to be in the fifth,” said Best.

Brian Shaw is currently working with his new coach Joe Kenn, a 2015 NFL Strength and Conditioning Coach of the Year, who is overhauling 4x WSM’s training program to increase his chances to win the fifth WSM title to match Mariusz Pudzianowski, is only a strength athlete five WSM titles.