Ten elite strongman athletes will battle it out for a record $182,000 in prize money 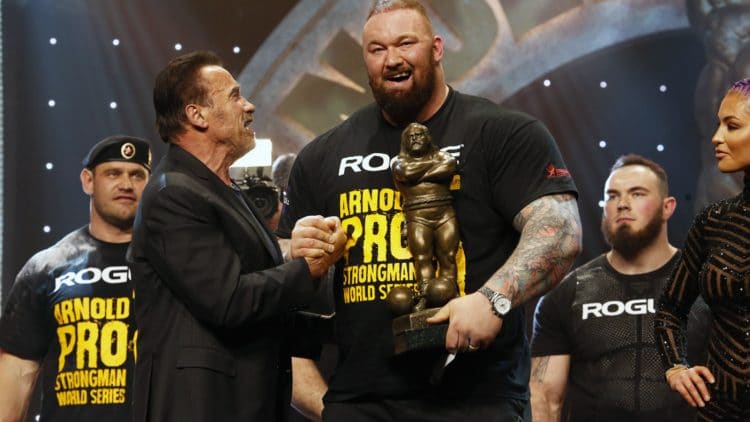 The 2022 Arnold Strongman Classic (ASC) will be held on March 4 – 5 2022, in the Strongman Arena in Hall D inside the Arnold Expo at the Greater Columbus Convention Center. There were no qualifiers for this edition of the ASC, so it is an invitational competition. That means that the organizers sent invites to competitors, with them not having to qualify for the ASC.

Arnold Strongman Classic is considered as one of the best strongman competitions, and the competitors are bound to impress us.

If any athlete has to withdraw before the start of the competition, Bobby Thompson will take their spot.

The total prize pool for this edition of the Arnold Strongman Classic will be $182,000. It will be shared between 10 competitors like this:

Tom Stoltman is probably the first favorite to win the ASC this year. The 2021 WSM champion had some great results even after recovering from Covid-19. Tom was crowned Britain’s Strongest Man, and just a week later he came second in the 2021 Rogue Invitational.

It is a known fact that his specialty are atlas stones and they are bound to be one of the events. If Tom comes rested then anything short from 1st place will be a failure to him.

Luke is arguably having the best season of his life, as he won Europe’s Strongest Man 2021, as well as a great performance in the 2021 WSM. Luke also managed to win the 2021 Giants Live World Open. Luke excels at the overhead press events, especially the log lift and it is hard to see anyone beating him on that.

Novikov failed to qualify for the finals of the 2021 WSM, despite winning the 2020 World’s Strongest Man title. After the 2021 WSM mishap, Novikov has been putting up solid results constantly. He managed to grab wins in the WUS Bahrain, WUS Dubai and the Giants Live Strongman Classic.

Inaugural Arnold Strongman Classic UK remains the only major competition in which Novikov doesn’t have a podium finish. The momentum is on his side, so that might not be for much longer.

Licis is most notable for his 2019 World’s Strongest Man win. We haven’t seen him compete since 2019, until this year when he won the 2021 Rogue Invitational, and brought home the biggest prize in the history of strongman. The momentum and confidence is on his side, as he also managed to break Thor’s Hammer world record. It will be fun to see if he keeps his 100% win rate in 2021.

Related: Martins Licis Gets More Than He Can Handle With Army Special Forces Obstacle Course

Markov is a 6x Russia’s Strongest Man, and this will be his debut at the Arnold Strongman Classic. Markov was supposed to compete at the 2021 ASC, as he has won the 2020 Arnold Amateur Strongman, but the competition was canceled due to Covid-19. Rightfully, Markov got the invitation to compete against the best in the world this year.

Caron is a veteran of the sport, having competed at the WSM 10x and managed to reach the final 8 times. His best finish is 3rd place in the 2021 WSM “Strength Island” in Bahrain, fifth at the 2021 WSM and 2nd at 2021 Shaw Classic. Caron’s speciality is the deadlift and he is probably the best deadlifter in the roster.

Mateusz has two recent competitions since returning from his tricep injury. Mateusz finished 2nd in the WUS Dubai, and 4th in the 2021 Rogue Invitational. Mateusz is known for his speed in various medley events and his pressing strength. He has already had success in the ASC, as he came 3rd two times and 2nd once. A good result in the 2022 ASC is a possibility.

Maxime showed just how good he is in the WSM 2021, where he managed to grab a podium finish. This was the first time we had seen him at the top level and it could be just the start. Maxime excels in static strength events, but doesn’t seem to be lacking at something special. Judging by his WSM performance, we can expect him to fight for gold.

Trey is having one of his best seasons yet. Trey managed to win the Shaw Classic 2021 after a huge 4th place finish in the 2021 WSM. Trey is known for his deadlift and atlas stones abilities, but he is overlooked as a contender. If the events are right, and he comes prepared, a podium finish would not be such a surprise.

This is most certainly a stacked lineup, with some huge strongman names. It will not disappoint, and a very close competition would not be such a surprise to see.