According to Brianny Terry, this is also her new PR, as she performed four reps more than her previous best. 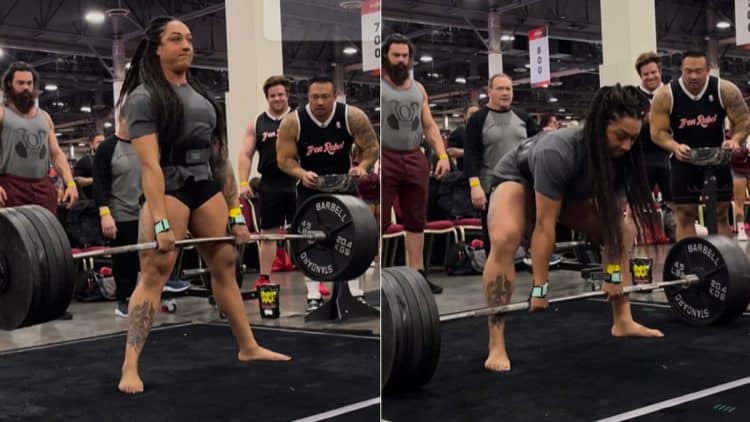 Brianny Terry is a powerlifter who recently made waves at the 2022 Olympia Expo by deadlifting 500 pounds (226.8 kilograms) for 10 repetitions in the booth of Stan Efferding, a world-renowned powerlifter, and bodybuilder. Brianny utilized lifting straps and a lifting belt, while she also opted for a barefoot sumo stance. This impressive feat of strength was all the more impressive considering that Brianny had just recently competed in the 2022 WRPF PPC Finals, taking into account the amount of travel and effort she put into the competition.

In addition to her success as a powerlifter, Brianny Terry has recently started competing in bodybuilding as well. The 2022 Mr. Olympia competition, which is widely considered the premier bodybuilding event in the world, may have been the primary reason for her attendance at the Olympia Expo. Thus, Brianny was able to engage in weightlifting and witness world-class bodybuilders competing, creating a thrilling and memorable experience for her.

Judging by the caption of Brianny Terry’s Instagram post, the recent set deadlift feat of strength is also a new PR, as she performed four more reps than she was previously able to do.

The career of Brianny Terry in powerlifting began five years ago, and she has competed in 10 sanctioned competitions so far. Now at 26-years-old, Brianny already has seven victories to her name, as well as some World Records. Her powerlifting activity has been limited this year since she began training for and competing in bodybuilding. This resulted in a victory in the True Novice, Class A, and Overall divisions of the 2022 NPC Dallas Championships.

Brianny Terry was not the only athlete to put on a show in Stan Efferding’s booth, as he gathered some of the strongest people on earth. Ciarra Cho impressed everyone with a 600-pound (272.2-kilogram) deadlift, while the 54-year-old Nick Best pulled 15 repetitions of 600 pounds (272.2 kilograms) as well.

Despite dedicating a lot of time to bodybuilding, Brianny Terry has not lost any strength. In fact, judging by her recent performances, Brianny has gotten noticeably stronger, while also improving her physique tremendously. So, she has plenty of reasons to be looking forward to her future.