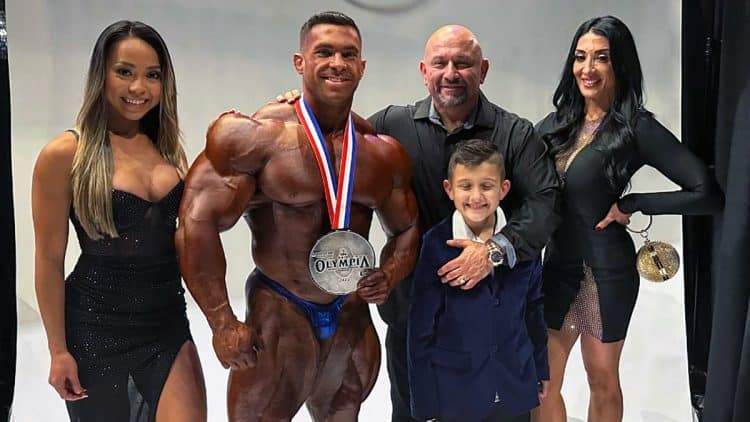 The 2022 Mr. Olympia was held Dec. 16-17 at the Planet Hollywood Resort & Casino in Las Vegas, Nevada. Participants from around the world made their way to the ‘Sin City’ for the most prestigious fitness showcase in the world.

There were a total of 11 events that took place over the two-day contest period. As is tradition, the mass monsters of the Men’s Open division received the most attention. There was a lot of anticipation going into this season of the Olympia, with a plethora of rising talent and proven contenders in the lineup.

After months of speculation, former 212 champion Derek Lunsford chose not to defend his throne and accepted a special invite from the IFBB Pro League to compete in the Open division. The invite was sparked following Lunsford’s impressive guest-posing appearance at the 2022 Pittsburgh Pro, where he stood next to the top contenders of the Open division, including Hunter Labrada, Nick Walker, and Brandon Curry, and held his own against the mass monsters.

With over 30 competitors on the roster, Lunsford joined as the wild card. While some were counting him out for the win, others believed he had the potential to shock the world.

Legendary bodybuilder Ronnie Coleman extended his support for Lunsford in the lead-up to the Super Bowl of bodybuilding. The eight-time Mr. Olympia champion backed Lunsford to be the biggest threat to Ramy, while former Olympia winner Samir Bannout stated Lunsford would “upset a lot of people.”

Defending champion Mamdouh ‘Big Ramy’ Elssbiay entered the show as the favorite to extend his lead and get the third Sandow trophy under his belt. He was expected to face a challenge from Brandon Curry, Nick Walker, and the evergreen Hadi Choopan.

In comparison rounds, it is generally considered advantageous for a bodybuilder to be placed in the middle, since this position allows them to be watched more closely by the judges. In many cases, this placement is considered to be a reliable indicator of how a competitor will be ranked.

During the pre-judging callouts, it was evident that the title could change hands. ‘Big Ramy’ was in the final callout but did not get asked to step into the middle of the stage. Instead, it was Choopan and Lunsford who stole the show along with Walker, Curry, and Samson Dauda.

Derek Lunsford and Hadi Choopan were placed in the middle during the final callout in order to be compared with an even number of six athletes. Throughout his performance, Lunsford made an impression on spectators and judges alike.

When it was time for the results, it was Hadi Choopan’s signature conditioning that earned him his first Mr. Olympia win. Derek Lunsford narrowly missed out on the top prize and defeated everyone else to get the runner-up finish. Nick Walker came in third and was also crowned the 2022 People’s Champion for his significantly improved package.

‘Big Ramy’ dropped down to the fifth spot, behind the former victor Brandon Curry.

Derek Lunsford releases statement after getting silver at the 2022 Mr. Olympia

In a recent Instagram post, Derek Lunsford issued a statement on finishing as the runner-up of 2022 Mr. Olympia.

“I may be the one standing on the stage,” he wrote. “But there are so many important people who are truly the backbone of the whole journey. My wife @jhelbell being absolutely the BIGGEST BLESSING in my life! ❤️ Thank you for always being by my side, especially through the tough times. I love you. @hanyrambod what you’ve done for me beyond the stage has impacted my life forever. I’m grateful to have you in my corner and helping me seek my fullest potential.

This is just the beginning… and what a beginning it has been. There are so many (not in the photo) who support me in their each individual ways. I could go on and on and on mentioning names and things I’m thankful for. I said it before and I will continue to say it… God’s plan is perfect. #GodSpeed

“I’m happy with and enjoying the moment, but not content. I know I can and WILL be better! Hope you all enjoyed the show this weekend. Congratulations to the NEW Mr. Olympia @hadi_choopan. My brother, you looked incredible. Much love to you and your family. #JustTheBeginning

“I also want to thank President Jim Manion and Vice President @t_manion for giving us the platform through @ifbb_pro_league @npcnewsonlineofficialpage. Owner @jake_wood_media and President @dansolomon_official for putting on the GREATEST bodybuilding event in the history of our sport! “

Derek Lunsford proved that he could stand next to some of the freakiest mass monsters in the world and even outshine them. Although he did not win, a silver medal in his debut will surely boost his confidence for the next edition.