Bryan Jones looks huge in a recent physique update with intentions of making a big splash in Men's Open bodybuilding. 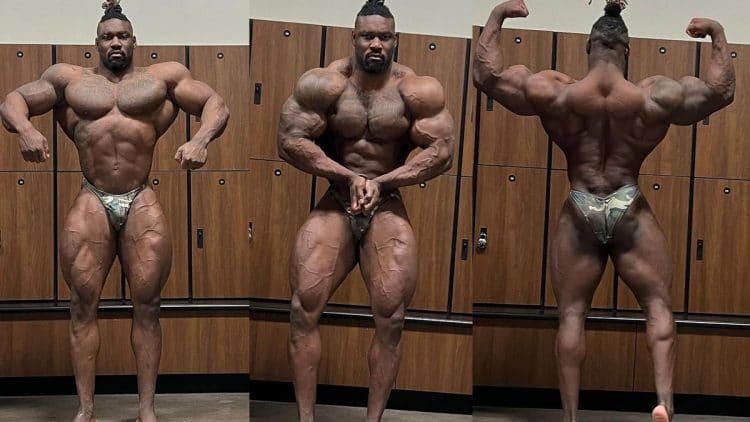 Clocking in at 244lbs, Classic Physique competitor Bryan Jones intends to shake up the Men’s Open landscape in bodybuilding this year. In a recent physique update shared on his Instagram page, Jones looks huge with a well-conditioned upper body.

Bryan Jones’ transition to Men’s Open has been brewing for some time. The bodybuilder revealed that he was making the switch from Classic Physique last October. Jones has been participating in Classic Physique for much of his career. His efforts had mixed results, but he managed to earn fifth place at 2020 Mr. Olympia.

In 2021, he competed at the Arnold Classic and came in fifth place. While he had high hopes in mind for 2021 Olympia, like defeating three-time Classic Physique Olympia champ, Chris Bumstead, he ended up placing in ninth. Following the ninth-place showing, Bryan Jones decided to take ten to eleven months off to prepare his physique for the new division. Last year, Jones hinted at a return to Men’s Open in late 2022, though it looks like he might be running ahead of schedule according to his most recent physique update.

In a recent post published to his Instagram page, Bryan Jones exited shadow mode and showed off his impressive physique at 244lbs.

Bryan’s build looks huge, and he has made gains to his upper body. His striated pecs are one of his strongest assets and still has an opportunity to fine-tune his physique and work on aesthetics. Bryan is no stranger to facing elite competition and has stood on stage with 2022 Arnold Classic champ Terrence Ruffin in the past.

Following Bryan’s physique update on Instagram, one of the most respected coaches in the sport, Milos Sarcev had high praise for Jones’ switch to the Men’s Open bodybuilding division. Milos took to the comment section and also complimented Bryan on his overall physique.

Despite never winning a major competition like Olympia, Bryan Jones always brought impressive packages to bodybuilding shows. In addition, Bryan has a knack for posing and understands how to occupy a stage effectively during his posing routines.

Bryan isn’t the only competitor who has his eyes on Open Men’s bodybuilding. In addition, 212 competitor Tonio Burton also made the transition. Tonio won the 2021 Indy Pro. Following the blueprint laid out by former 212 champ, Shaun Clarida, Tonio tried his hand in the Open Division at 2021 Legion Sports Fest where he secured fourth place.

RELATED: Shaun Clarida “I’ll talk to Jim Manion and Jake Wood” About Competing in Both 212 and Open Bodybuilding

It looks like Men’s Open is getting an infusion of talent this year. Bryan looks huge at 244lbs and intends to make a giant splash when he takes to the stage in 2022.