It was King Kai Vs. The Dragon but nobody lost in this brutal, yet inspiring workout session recently. 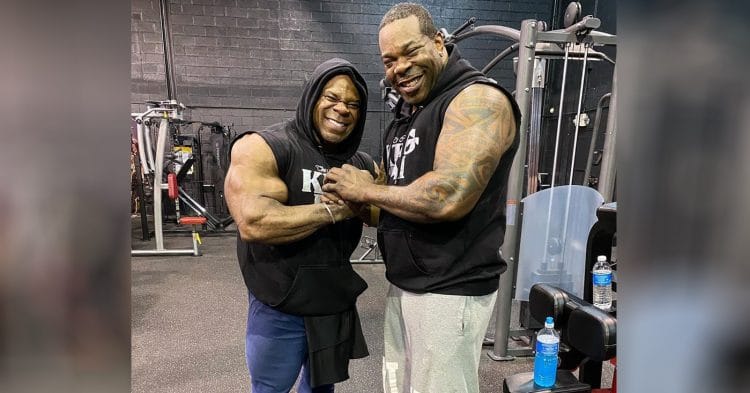 Rapper Busta Rhymes most know for his rapid lyrical style is no stranger to the gym which was very apparent when he joined ‘The Predator’ Kai Greene for a chest and back workout session recently. Greene was the runner-up three times in the Mr. Olympia competition and is an iconic figure in the bodybuilding world.

They hit some chest and back for this workout and from the video, Rhymes was able to hold his own although it was evident that he was being pushed to his limits. The clip started with Greene doing an incline bench press of 315lbs and then it switched to Rhymes who said, “Let me try my hand with that 315 (lbs)“.

Related: Kai Greene Dresses Up Like A Lady In Hilarious Video You Have To See To Believe

So they hit some bench, cables, dumbbells, and push-ups during the session and overall, it was very productive for both of them.

“If that ain’t inspiration, I don’t know what the f-k is man,” Rhymes said at the very end of the clip.

“When you think about coasting or doing JUST enough to get by… Remember this.. People are counting on you to help unlock the door to their potential. And when people count on us, we have to live with the result of that. If we don’t pull through and their potential isn’t reached, there is a partial burden resting on our shoulders. If we make the moments count and offer our best, we are granted that small win inside our soul, knowing we made a positive and unforgettable difference. –

It’s easy to get caught up in the daily grind, but check yourself! Are you delivering your best work? Rain or shine, the world needs more people that promise less and deliver so much more.”

Now many are probably wondering what’s next for Kai Greene. He has been involved in some film work and hasn’t competed since 2016. Well, late last year, he explained that it was possible he’d compete again. But at this point and with all of the changes that have taken place, it’s impossible to know what the future will look like for Greene.

He’s 44 years old right now and doesn’t have all the time in the world. But if he wanted to compete at this year’s Olympia, it’d most likely be possible for him to do so. Chief Olympia Officer Dan Solomon doesn’t even know what Greene plans to do but he thinks it’s disrespectful for Greene to play with the minds of fans which he expressed in a recent interview.

So, let’s see what this year brings with the recent changes that have been made as far as the Olympia organization and the scheduling of events.

Also read: The Olympia Has Been Sold By American Media LLC