No Result
View All Result
Back
Fact Checked
Fact Checked
This article was written by one of our qualified writers, and fact-checked by our experts. The numbers in parentheses (e.g. 1, 2, 3, etc.) throughout the article, are reference links to peer-reviewed studies.
Our team of experts include a board-certified physician, nutritionists, dietitians, certified personal trainers, strength training experts, and exercise specialists.
Read Our Editorial Process

Need more variety in your back training routine? The cable incline pushdown is a unique and effective exercise that'll help to develop the lats. 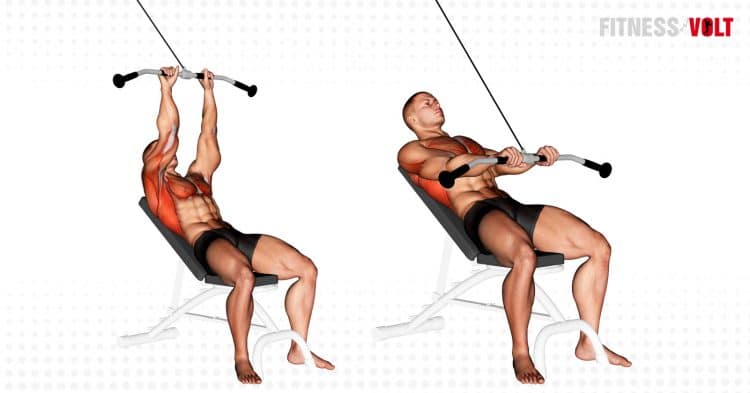 The cable incline pulldown is a back exercise variation that emphasizes the latissimus dorsi or simply lats for short. It’s not an exercise that you see performed often in your local gym, and you may not do it yourself. However, that doesn’t mean it’s any less effective than other similar variations.

Aside from developing the lat muscles, it’s one of the best movements for improving scapular strength and stability. This is an essential component of safely and effectively performing any compound exercise with proper form and posture.

Today, we’re going to explain how to do this exercise, offer some key tips, variations, and provide an example of how to include it in your back training routine.

Here’s a guide to the cable incline pushdown…

The cable incline pushdown engages several muscles that assist during this exercise.

Lats for short, this large broad muscle spans the lower posterior thorax. It gives width to the back and appears like a pair of wings when well-developed and flexed. The function of the lats is thoracic and arm motion. The lats, along with the teres major and pectoralis major adducts and medially rotates the humerus (upper arm bone). It also assists in humerus extension and helps the trunk move forward and upward when the arms are positioned overhead (e.g. pull-ups, climbing, etc).

The deltoid posterior or rear deltoids is one of the three heads that make up the shoulder muscles. It has a few different functions. The first is that it assists the anterior head in stabilizing the arm so that the lateral head can abduct the arm past 15 degrees. It also works with the lats to extend the arm during walking and works with the other delt heads to prevent inferior displacement of the glenohumeral joint when the arm is adducted against the body under a weight load.

The teres major medially rotates and adducts the arm and stabilizes the shoulder joint.

How To Do The Cable Incline Pushdown

Here are step-by-step instructions for how to properly execute the cable incline pushdown.

While the cable incline pushdown is a great variation, there are other movements that don’t involve as much setup but that also works extremely well for developing the lats and scapular strength and stability. 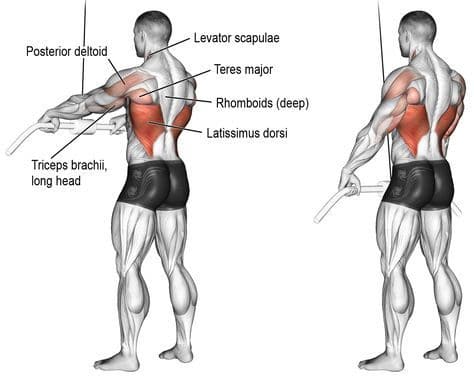 The straight-arm pushdown is the most commonly-used variation. It’s easiest to set up and perform and is the perfect choice for including in supersets due for this reason. It’ll still work the same muscles and function and we definitely recommend including it into your routine. 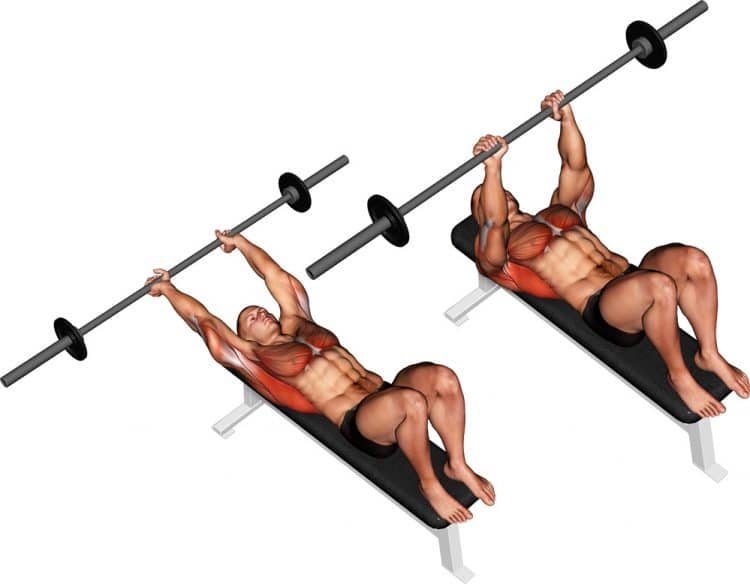 The barbell pullover is a lying variation that is often utilized to develop the lat muscles. There are several variations of this variation, and we also recommended utilizing the bent-arm decline version that offers an advantage in that you’re able to better keep tension on the muscle.

The machine lat pullover offers an advantage over other variations because you’re locked in and can focus solely on the movement without having to stabilize or focus on any other aspect of the exercise. Of course, you’ll still need to maintain proper body positioning by engaging the lats and keeping the chest up to maximize this exercise.

There are different types of machines so you’ll need to learn how to use the one you have access too.

How To Incorporate The Cable Incline Pushdown Into Your Training Routine

There are a few ways to include the cable incline pushdown into your training regime.

Another common way to include it is after your heavy back training movements. So for example, you’ll perform your deadlifts, rows, etc, and then incorporate the cable incline pushdown at the end to finish things off.

This depends on your overall training volume, but, in general, we recommend doing 3-4 sets x 10-12 reps.

Focus on your form and progress week by week, by aiming to add a little more weight and/or by completing more repetitions, all while sticking with the recommended rep range for most of your sessions.

The cable incline pushdown is an excellent variation of an essential movement that has lots of carryover to the bigger compound, multi-joint lifts. Not only does it build the lat muscles, but it develops scapular stability and strength and is a good teaching exercise for maintaining proper posture during your bigger movements.

We hope that this exercise was helpful and we’re confident that you now have the knowledge to be able to effectively include this movement in your training movement.

Kettlebell Pistol Squat — Muscles Worked, How To and Variations

The kettlebell pistol squat is not for the faint of heart. This advanced movement requires a level of balance, mobility,...

The barbell bench press is the undisputed king of upper body exercises. Bodybuilders to it to increase pectoral development, while...