Discover the training and diet Charlie Hunnam followed to get big and lean for his roles in Sons of Anarchy and King Arthur: Legend of the Sword. 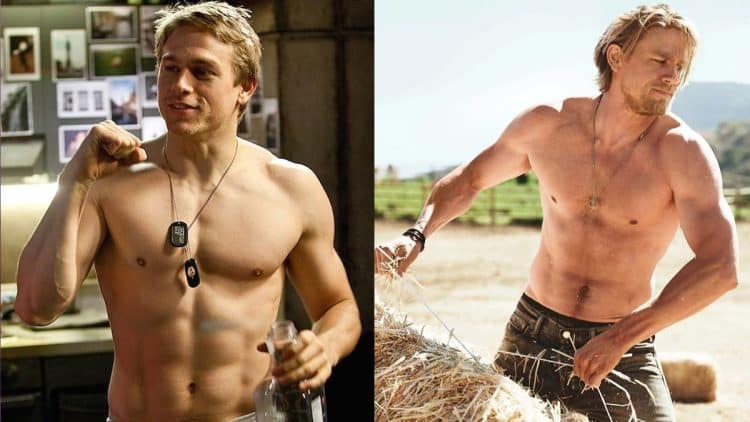 Charlie Hunnam is a British actor and screenwriter. He got attention from the fitness community when he bulked for his role as Jackson Teller in ‘Sons of Anarchy’ in 2008. Since then, he has maintained a muscular, lean athletic physique.

In this article, we’ll shine a spotlight on the training, nutrition, and supplementation program Charlie follows to maintain his impressive condition.

Charles Matthew Hunnam was born on April 10th, 1980, in Newcastle upon Tyne in England. He was raised by his mother, who was a ballet dancer. As a youth, Charlie played rugby. He also fought often, leading to his expulsion from grammar school. From then on he was homeschooled. After completing school, he attended the Cumbria College of Art and Design in Carlisle, where he studied performing arts.

Charlie was discovered by a TV talent scout when he was 17. His first TV role was in the teen drama, Byker Grove. A year later, he was cast in the drama Queer as Folk.

In 1999, Charlie moved to the United States and landed a recurring role in Young Americans. His first movie role was Abandon (2002). In 2005, he returned to the UK to star in the movie Green Street.

Between 2008 and 2014, Hunnam played the role of Jackson Teller in the show Sons of Anarchy. He had to pack on muscle mass for the part. A succession of movie roles followed, including The Lost City of Z in 2015 and The Gentlemen in 2019.

In 2017, he played the title role in King Arthur: Legend of the Sword. For this part, he followed a strict diet and training regime to get as lean as possible.

Charlie has also established himself as a successful screenwriter.

Charlie Hunnam is a busy guy. While shooting for Sons of Anarchy, he was on the set for 14-15 hours every day. He would then go to the gym, demonstrating the discipline he has come to be known for.

Hunnam mainly does bodyweight workouts, consisting of exercises like pull-ups, push-ups, and dips for high reps.

On Monday and Tuesday, Charlie does a full body calisthenic type workout involving five compound exercises. Even though he’s not using weights, he’ll often hit the gym to pump this program out in around 45 minutes.

Charlie finishes his workout with an abdominal circuit involving the following exercises:

He does 25 reps on each exercise, with no rest between exercises. He completes three rounds of the circuit with a 60-second rest between sets.

Every Wednesday, Charlie will do some form of cardio exercise. It often involves training on traditional gym equipment such as the treadmill, rowing machine, or elliptical. However, he will often skip the gym and go for a run in the woods or cycle around his neighborhood.

On Thursdays and Fridays, Charlie again works his entire body. This time, though, he throws in a couple of free weight exercises (squats and dumbbell rows).

Charlie doesn’t train on the weekends. However, he often plays sports and games that keep his body moving. It acts as a form of active recovery for him.

Some days, to mix things up, Charlie will do a bodyweight challenge where he will do the following exercises:

To achieve the high rep count, he’ll break them down into sets of 8 to 15 on the pull-ups and 50 on the squats and push-ups.

Charlie follows a well-balanced diet containing high protein, medium carbohydrates, and low fat. He eats plenty of vegetables, lean animal proteins, and complex carbohydrates such as oatmeal and sweet potatoes. He has a sweet tooth and occasionally indulges in his favorite desserts. His favorite treat foods are ice cream and chocolate.

Charlie is quoted as saying, “Good-quality air travel and good-quality food are the two luxuries that I never feel any guilt indulging in.”

To get as ripped as possible for his role in King Arthur, Charlie removed all junk food from his diet and went so low on carbs that he was essentially following a ketogenic diet.

Here is a sample daily diet for Charlie Hunnam:

Charlie only uses a few supplements, including a whey protein powder which usually serves as his post-workout meal. Charlie takes a whey protein isolate with zero carbs and milk fat.

Charlie Hunnam is one of the most popular actors of our time. Part of his appeal is his lean, muscular physique. As we’ve seen, Charlie doesn’t follow the typical bodybuilding style split routine involving lots of weight resistance exercises. Instead, he relies on a few basic bodyweight exercises that he trains using high reps and intensity.