"The Mutant" crushes a back workout under coach Dominick Mutascio's watchful eye. 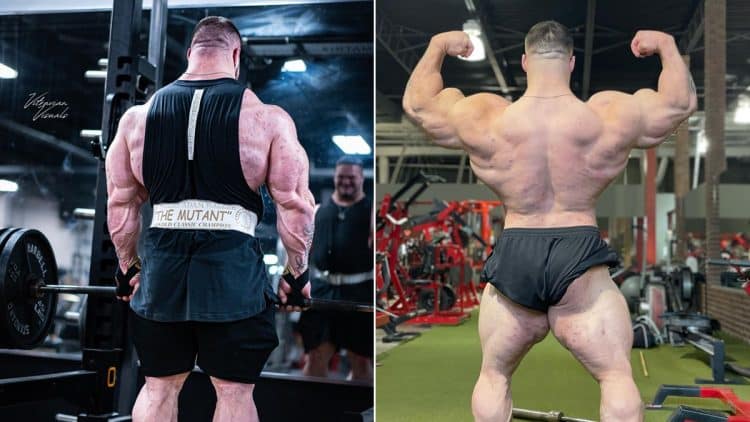 Nick Walker is an American professional bodybuilder that competes in the Open division of the IFBB Pro League. He earned his IFBB Pro card with a win at the 2020 NPC North American Championships. He has competed at four pro shows in his career so far and has never finished outside of the top five. After making his pro debut with a fourth-place finish at the 2020 Chicago Pro, Walker went on to win the 2021 New York Pro. The Mutant made his Arnold Classic debut the same year and emerged victorious at the world’s second most prestigious bodybuilding competition. The 2021 NY Pro win earned Walker a direct qualification to the 2021 Olympia, where he finished fifth.

He took time off after a busy competitive schedule in 2021 and focused his energies on making gains after the 2021 Olympia wrapped up. The Mutant will next be seen in his posing trunks at the 2022 Olympia. He started his competition prep for the Superbowl of bodybuilding in August. Recently, he went through a back workout under coach Dominick Brandon Mutascio’s, aka Dom SuperSliced’s, aka Dom’s, guidance as a part of his competition prep. The video of this session was uploaded on his YouTube channel.

Walker started the back workout with single-arm lat pull-downs to work the latissimus dorsi (lats). It is a large muscle that helps with different pulling actions and is responsible for the perfect V-taper. The lat pull-down is a compound overhead pulling movement that recruits several muscles, including arms, shoulders, core, chest, and lats.

Since this was the first exercise of the training session, Walker performed a few sets of this movement with moderate weights and moved on to the next exercise.

“I didn’t want to go too heavy. Just wanted to focus more on the stretch and contraction,” Walker said afterward.

This was the second exercise in Walker’s back routine. Seated rows primarily target the upper back. It can be a go-to option for people looking to improve their back thickness and posture. The Mutant performed this lift unilaterally and got a few sets of seated rows with the rest-pause method.

Walker next took to seated rows on the Prime plate-loaded machine. This machine offers different variations and allows the user to manipulate the resistance profile to target different areas within the exercise movement.

The Mutant adjusted the machine to increase its resistance in the eccentric phase of the movement. Walker performed a triple drop set of seated rows with this setting and moved on to the next exercise.

This deadlift variation was the next exercise on Walker’s back day agenda. Rack pulls are a full-body compound movement that recruits a majority of muscles in the upper and lower body. While traditional deadlifts require lifting the weight off the ground, a power rack elevates the starting position to just below knee level in the rack pull.

Walker worked with heavy weights for this exercise and did the top set of eight reps with four and a half plates on either side of the bar. The Mutant maintained a six to eight rep range for the rest of the sets.

Walker next took to the straight-arm cable pull-down. Once again, the lats are the main target muscles in this exercise. However, it also recruits the triceps, posterior deltoids, and teres major muscles. The 28-year-old performed three working sets of this exercise using a rope attachment and took to the final exercise of the day.

The close grip seated row using D-bar handles served as the finisher to Walker’s back workout. The Mutant employed the FST-7 (Fascia Strength Training) training principle for this exercise. The training principle is the brainchild of the famed bodybuilding coach Hany Rambod. The seven in the name refers to the number of sets to be performed for an exercise. However, Walker performed four to five sets of the exercise with a 15-second rest between sets. He then wrapped up the training session.

Walker believes he gets more dialed in and focused as the competition day approaches. It helps him boost his work intensity. His game plan for the 2022 Olympia is to show up in the best possible shape and shock the world with the results.

“I think that’s what I’ve done my whole career and I think that’s what separates me from the rest. Being very obsessed, very OCD with certain things, being locked in when it’s time time to be…  That’s what got me as far as I am, blocking out negativity, any BS I need to and just work my ass off and shock the world like I always do. That’s the game plan for this year,” Nick Walker said.

However, Walker is aware that, with its stacked roster, the 2022 Mr. Olympia will probably be the most competitive battle for years to come. Looking at the rigorous work all the competitors are putting in, it’s hard to say who will take home the coveted Sandow when Olympia returns to its home in Las Vegas on Dec. 15.