The three-time Classic Physique Olympia winner is cutting out carbs as he aims to win his fourth straight title. 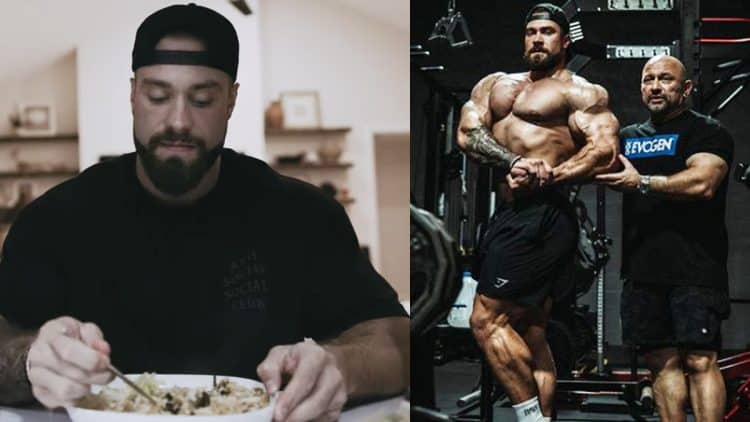 The 2022 Mr. Olympia contest is rapidly approaching next month and plenty of bodybuilders are in the midst of preparations. One of which is three-time Classic Physique Olympia Chris Bumstead, who recently shared a full day of eating in contest prep for his upcoming title defense.

Bumstead has held on to the Classic Physique Olympia crown since taking it from his predecessor Breon Ansley in 2019. In 2020 and 2021, ‘CBum’ defended his title, and in the process, cemented himself as the most successful Classic Physique bodybuilder in the sport.

While preparing for another title venture, Bumstead has been training diligently. However, last December, Bumstead contracted a Covid-19 infection and lost a considerable amount of weight. To combat the problem, the reigning Classic Physique champ implemented a strict 5,000-calorie bulking diet during most of his off-season.

In past Olympia appearances, Bumstead was trained/coached by Men’s Open bodybuilder Iain Valliere. This year, Valliere and Bumstead won’t be working together. The announcement was made in late October, with Bumstead revealing that he is now being trained by Hany Rambod. To shred down for yet another title defense, Bumstead is sharing his 3,000-calorie diet for 2022 Olympia.

Check Out Chris Bumstead’s Near 3,000-Calorie Diet to Get Shredded for 2022 Olympia

Bumstead starts with a pancake breakfast at 9 a.m.

“Breakfast consists of some oats, eggs, and protein, which I like to turn into the good ol’ CBum protein pancakes because they are delicious,” Chris Bumstead said.

Bumstead proceeds with meal two, which consists of standard bodybuilding staples like chicken and rice, with a side of green beans.

“This is my beautiful meal, very extravagant. Chicken, rice, and some green beans. Green beans are always baked in the oven. I don’t know why they taste better like that. That’s it. I’ve been hardcore this year, probably because of Hany Rambod. He said I’m not allowed to have sauces on all my meals”

“Nothing exciting. My next meal is the exact same,” Bumstead shared. “I like to eat three meals before I train. This is like my work office meal to get me through the day.”

The 27-year-old had his first fish of the day for his fourth dish.

“This is my white fishy fish meal. The least fishy fish of the fishy fish,” Bumstead said. “This is typically my pre-workout, but today is my rest day, so I’m not going to be working out, but I have the exact same diet on rest days and training days.”

Sometimes Bumstead opts for a shake, but he said he chose to have potatoes and fish instead.

“Typically, I would have a shake right now, but I was in the cold tub and I was too cold to have something cold. So, I wanted something warm. So, I put on a sweater and made some potatoes.”

Bumstead briefly discussed how Rambod is calculating his macros.

“The way Hany [Rambod] operates with all this stuff. He calculates the carbs from direct carb sources. The protein from direct protein sources and fats wherever the fats are coming from. But mainly focusing on the protein and the carbs. So, we’re not counting the protein you get from oats and a little bit of rice.”

For his post-workout, CBum consumed a shake to ensure he gets enough protein at this stage in prep.

“I’m making sure to get all my protein in. Sometimes I’ll have a low carb day on my rest days, but we’re not quite there yet.”

“I’m having magnesium every night. It might relax you. It might make you go to the bathroom. All the good stuff. It’s just a great thing to have in your body.”

Bumstead finished off his full day of eating with salmon, potatoes, and green beans.

“This is the final meal of the day. My one fat protein source — because I either have beef or salmon but I’ve been having a lot of salmon lately,” Bumstead shared.

“It’s just under 3,000 calories,” Bumstead said. “I like to personally cut my carbs in my final meal,” Bumstead shared. “

The last time fans heard from Bumstead he was reflecting on his bodybuilding season. According to Bumstead, he’s not preparing for anyone but himself. He finished a recent back workout motivated to ‘fu** up’ a fourth Olympia.

There are less than five weeks until the 2022 Olympia as Chris Bumstead continues to shred down. With contenders, Breon Ansley, Terrence Ruffin, Urs Kalecinski, and Ramon Rocha Queiroz all gunning for Bumstead’s title, this year’s event will be one to remember.