'The Miracle Bear' joins 'CBum' at the Revive gym for a heavy arms and shoulder workout as a part of their 2022 Olympia prep. 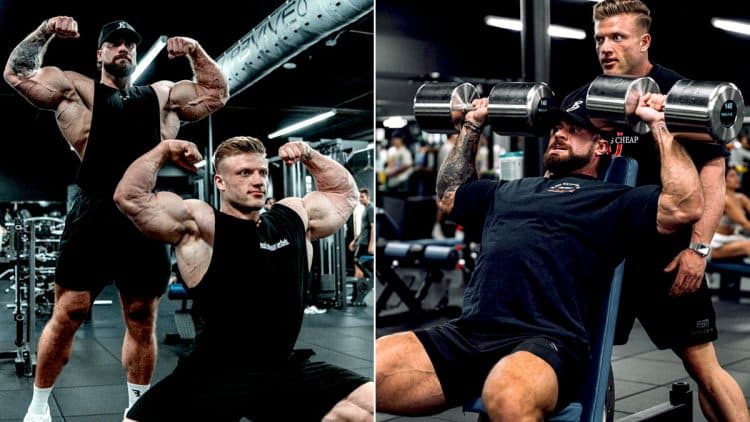 Bumstead will attempt to score his fourth consecutive divisional win at the 2022 Olympia. The event will take place from Dec. 15-18 in Las Vegas, Nevada. However, the professional rivalry does not stop him from training with Kalecinski and exchanging bodybuilding knowledge.

Kalecinski is a 24-year-old German bodybuilder that secured a fourth-place finish in his maiden Olympia appearance in 2021. In 2022, he won the Boston Pro and the 2022 Kuwait Classic Pro, earning a direct qualification for the 2022 Olympia. The Miracle Bear recently shifted his training camp to the USA from Germany in a bid to learn from the more accomplished bodybuilders. After training with the 2021 Arnold Classic winner Nick Walker and the 2022 Arnold Classic Physique winner Terrence Ruffin, Kalecinski joined hands with Bumstead to train in the latter’s gym. The video of this session was uploaded on Bumsted’s YouTube channel. So without further delay, let’s take a closer look at the detailed account of this session.

Kalecinski and his team joined Bumstead at his residence for a pre-workout meal, after which the duo headed to the Revive gym for their arms and shoulders workout. Bumstead warmed up with a few resistance band exercises before starting the workout and then proceeded to the heavier movements.

The Classic Physique competitors started the workout with shoulder exercises and first performed the standard seated dumbbell shoulder press to target the anterior deltoids. While Bumstead took a more measured approach and started with 85-pound dumbbells, Kalecinski wasted no time in building up and cranked out the first set with massive 125-pound dumbbells.

“Really no warm-up. He just jumps into it!” Bumstead said about Kalecinski.

The duo performed a few sets of this movement with incrementally heavier loads and moved on to the next exercise.

Kalecinski and CBum next performed the machine variation of the seated overhead press on a plate-loaded machine. Bumstead stated that he has had shoulder issues for over five years. Therefore he prefers to use machines when it comes to shoulder movements.

They both cranked out solid sets on the machine by adding more plates for each set and jumped into the next exercise.

After working the anterior delts with the overhead pressing movements, it was now time to target the lateral delt heads. The duo performed a few sets of lateral raises on the machine and wrapped up the shoulder training session to focus on the arms.

The preacher curl is an isolation movement that hits the biceps better than most other movements due to the arm position. Kalecinski and Bumstead started the arms training with this movement and performed a few sets unilaterally before taking to the next exercise.

This movement is an optimal biceps builder as it trains three functions of the biceps simultaneously — supination, elbow flexion, and shoulder flexion. However, a poor form can result in understimulated biceps and sore shoulders. Kalecinski and Bumstead performed this exercise on the machine while the triceps were firmly pressed against the pad to stimulate the biceps to a greater extent.

After working the biceps with the first two movements, the training partners then put in some work on the triceps. They started with the triceps pushdowns and used a loop band for the exercise. After activating the triceps with a few sets of slow and controlled reps, they went on to the next exercise.

When done with the correct form, overhead cable triceps extensions can provide maximum shoulder stability, joint alignment, and elbow flexion. These are the three most important criteria to get a maximum contraction in the triceps. The Miracle Bear and CBum got a few sets of this movement under their belt and took to the finisher of the day next.

Bumstead and Kalecinski finished the arms workout with this antagonistic superset to get the most out of this workout. An antagonistic superset involves two exercises that target opposing muscle groups. Biceps and triceps, back and chest, or quadriceps and hamstrings are the muscles that fall into this category. It turns out that the biceps and triceps are one of the most responsive muscle groups for this training method.

The duo targeted the triceps with crossover cable triceps extensions while the seated dumbbell curls worked the biceps. After performing all the sets within this superset, The Miracle Bear and CBum wrapped up the training session.

It’s no secret that Bumstead is a favorite heading into the 2022 Olympia. Prima facie, the gap between him and competitors like Kalecinski seems wide enough for CBum to prevail. However, the 27-year-old is not losing the focus and intensity in his training. Collaborating with a hungry and young up-and-comer like The Miracle Bear for a workout will give the reigning Classic Physique champ a fair idea about the challenges he will face at the 2022 Olympia.

Former champion Breon Ansley is still in the mix and intends to bring his biggest biceps and triceps when he steps on stage. On the other hand, Ramon Rocha Queiroz has promised to ‘surprise’ Bumstead at the 2022 Olympia. ‘Proven’ Terrence Ruffin is also not leaving any stone unturned to dethrone Bumstead after consecutive runner-up finishes at the 2020 and 2021 Olympia. It will be interesting to see how Bumstead handles his business on Dec. 15.

You can watch the full workout video below, courtesy of Bumstead’s YouTube channel: