After building his back for 2022 Mr. Olympia, Bumstead reflected on what's to come next: 'It takes more to beat myself every single year.' 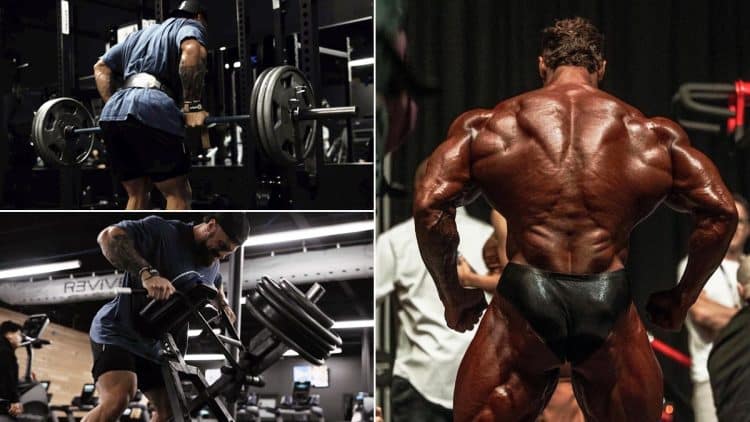 Chris Bumstead, the IFBB’s most popular and dominant Classic Physique athlete, plans to defend his title this December. In a recent video, Bumstead smashed an intense back workout and discussed where his head is at five weeks from the 2022 Olympia contest.

Bumstead claimed the Classic Physique Olympia title in 2019 when he defeated Breon Ansley. At the last two Olympia contests in 2020 and 2021, Bumstead raised the bar for his division, showcasing dramatic improvements en route to earning gold at both competitions.

Unlike previous seasons, Bumstead revealed a ‘minimal’ bodybuilding cycle he utilized this year. He specified that at the start of his career, he used four or five different compounds, but things have changed since. While some expressed concern about his new regimen, other veterans like former Mr. Olympia Samir Bannout believes the small cycle will benefit him in the long run.

Bannout added that seven-time Mr. Olympia Arnold Schwarzenegger used two compounds at the height of his career and did just fine. With less than five weeks until 2022 Mr. Olympia, Bumstead shared his latest back workout and post-training thoughts.

Find a full list of the exercises Chris Bumstead used below:

Bumstead began the workout targeting his lower lats to bring out the density of his back.

“We’re trying to focus on building the lower lats right now to bring the density out of my back so it pops on stage when I’m hitting a back double bi. But first, two more sets here,” Chris Bumstead said.

At this point in prep, Chris says it’s important to get out of his head and focus on moving forward despite being fatigued.

“I’m pretty much at that point in prep where I still have my strength when I’m in the set. [But] leading up to it and all day, I’m so tired. This is literally when it’s all fuc**ng mental. Getting out of your fuc**ng head. Even if you feel tired, out of it, whatever,” Bumstead shared.

With a series of row movements, Bumstead is making sure to isolate his upper back.

“I’m making sure I’m really isolating my upper back this time. Instead of elbows in tight, underhand grip, I’m pulling down low. Overhand grip, chest supported, it’s a little bit higher to hit my upper trap and mid back.”

On the horizontal row machine, the three-time reigning Classic Physique Olympia does one arm at a time. He compared this exercise to dumbbell rows except he likes that he can add more weight if he chooses.

“I like doing this one arm at a time. I put the same leg with the same arm I’m rowing. I put that back — so I can get my hip out of the way and pull my elbow in low and tight. Again, hitting that lower lat.”

Before practicing low row machine sets, Bumstead removed his shirt and posed for a moment.

“My impatient ass decided to do the low rows, and then we someone clears up, I’ll switch over there and finish the high rows and some pullovers and call it a day,” Bumstead said.

Bumstead finished up on the high row machine before performing his only dumbbell movement.

He performed two sets of dumbbell pullovers and focused on the contraction.

“Instead of all the tension being there in the stretch, it’s more in the contraction down here due to the pulley pulling you forward instead of down like the dumbbells,” says Bumstead. “It’s a good way to finish off back day.”

For this year’s Olympia contest Cbum is no longer working with Iain Valliere. Instead, Bumstead has teamed up with Hany Rambod to prepare for his next show.

CBum Reflects on Current Prep: “I’m Ready to Fu** Up A Fourth Olympia”

After the back training session, the three-time Classic Physique Olympia winner discussed his ambitions and goals for the current season.

“Beating myself every single year… it’s not the same thing. If I’m getting better every year, it takes more to beat myself every single year. It doesn’t matter what second place, third, fourth, fifth, sixth, sixteenth, what any of them are doing or what any of them look like. They’re not winning, says Bumstead. “I’m ready to fu** up a fourth Olympia.”

According to Bumstead, his idea of winning has changed from year to year.

“My definition of winning has changed over the years. It isn’t just about trophies, money, and all that stuff. It’s really about the intrinsic growth I have within myself as well as my physique. I know this sport is currently still making me a better person.”

When discussing a potential end to his career down the line, Bumstead had the following to say:

“I just hope I have it in myself to know when it’s time to hang it up and call it quits,” Bumstead said.

The last time Chris discussed his season and aspirations, he shared a ‘champion mentality’ Olympia prep video on YouTube. He explained how ‘winning’ doesn’t happen on show days, but instead, success comes as a byproduct of all of the painful workouts and early mornings it took to reach the top.

Bumstead is on a mission to produce his fourth Classic Physique Olympia title. There are less than two months from the show, and Bumstead’s mental toughness will be an asset when he takes on the world’s best this winter.