With the Mr. Olympia president hinting at a Masters Olympia competition in 2023, Dexter Jackson would be a perfect fit for the show's return. 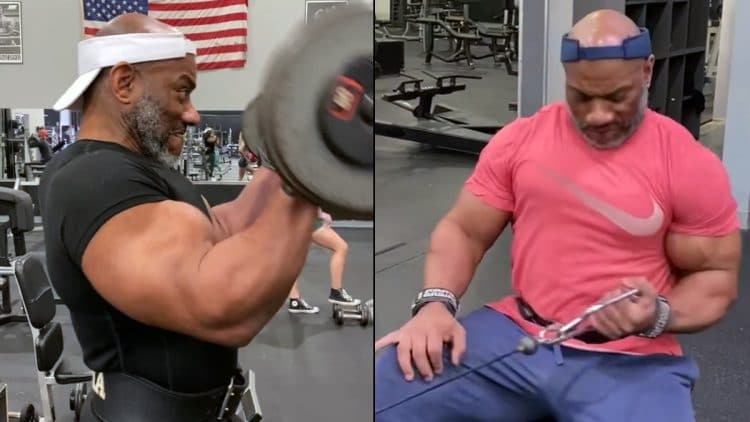 Elite bodybuilding and Dexter Jackson go hand and hand. Recently, Jackson shared a workout on his Instagram page that has fans wondering if he might attempt a run at Masters Olympia in 2023.

Competing in the sport for nearly three decades, Dexter Jackson is the embodiment of hard work and dedication. During his heyday, “The Blade” managed to become 2008 Mr. Olympia, after defeating fellow bodybuilding icon Jay Cutler in the finals. In addition to his Olympia victory, Jackson also managed to win the Arnold Classic a total of five times (2005, 2006, 2008, 2013, 2015).

Before his final Olympia show in 2020, Jackson decided win or lose, he would retire from the sport and followed through. After placing ninth at Olympia, the bodybuilder stepped away. However, that hasn’t stopped the legend from periodically sharing physique updates and workout routines. Recently, the Mr. Olympia president made headlines after revealing that Masters Olympia will return “definitely by 2023”.

The news was certainly welcome for Dexter Jackson, who won the final Masters competition in 2012. At the time, the age limit for the show was 40 years and above. While “The Blade” has made no indications that he will be competing at Masters, it appears he’s a prime candidate for the show and its anticipated return.

At 52 years old, Jackson still displays strength and versatility inside the gym. Despite looking downsized as of late, it illustrates Jackson’s focus on staying healthy while no longer competing in bodybuilding shows. The legend shared a workout video on his Instagram page with a slimmer physique.

“Feeling good!! How bout you guys? Starting to go a lil heavier now and I’ve added a meal and a shake to my diet so I’m now up to 3 meals and a shake daily. Weighing about the same but muscles filling out and I’m getting leaner. 👏🏾” Dexter Jackson shared.

The Masters Olympia competition took place from 1994 to 2003 and then again in 2012. The idea behind the competition was to give bodybuilders who are entering their twilight years a chance to compete and make a living. While the competition has taken a lengthy hiatus, many are excited about its potential return. Additionally, Jake Wood made it apparent that the event would be big enough to warrant its own dedicated venue and location.
With a focus on building muscle and maintaining a trimmed physique, Jackson’s appetite for competition is still sky-high. In retirement, the legend often takes to social media and spreads knowledge through his demanding workout videos. Jackson’s activity is a pivotal factor in how he keeps his body healthy year-round. In addition to healthy lifestyle decisions, the legend also utilized hormone replacement therapy as a means to stay reinvigorated and strong.

RELATED: Dexter Jackson: Nick Walker ‘Doesn’t Have A Very Pleasing Physique’
While “The Blade” hasn’t mentioned directly if he is going to take part at Olympia Masters, speculation is reaching a boil seeing as he was the last man to win the show. Following his recent workout video, Jackson appears downsized, but still sports a toned physique at 52 years of age.