CBum does a four-peat at the 2022 Classic Physique Olympia. 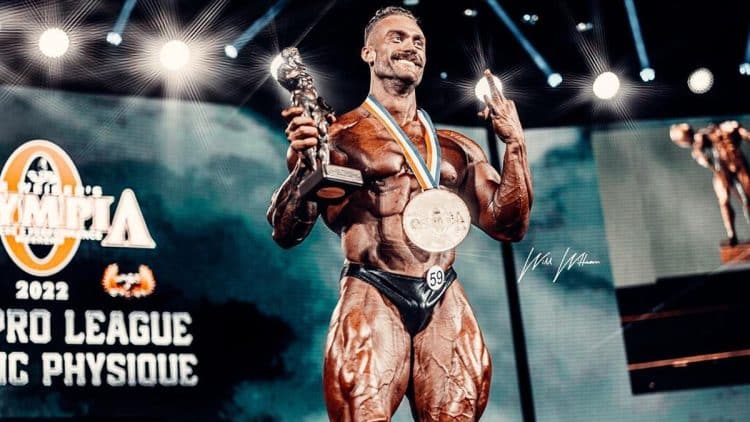 The 58th Olympia contest, scheduled between Dec. 15-18, 2022, was full of surprises. However, it was not the case for the Classic Physique division as Chris Bumstead bagged his fourth Olympia title.

Although just seven years old, the Classic Physique Olympia division is turning out to be one of the most popular divisions at the sport’s biggest contest. The division reeks of golden-era-inspired aesthetics, symmetry, and conditioning.

Contrary to what he would have liked, CBum didn’t cruise into the 2022 Olympia. First, he and his brother-in-law Iain Valliere discontinued their coach-client relationship, and the three-time Classic Physique O champ had to find himself a new coach. However, things worked out well, and the Canadian bodybuilder hired the ace coach Hany Rambod for this year’s Olympia prep. Furthermore, the 27-year-old bodybuilder popped his left squad a few weeks out of the Olympia. Although the injury wasn’t too bad, CBum had to undergo therapy to fix the shape of his quad.

Nonetheless, none of these obstacles could stop the Canadian bodybuilder from securing his fourth Classic Physique Olympia title.

59 competitors locked horns on the Classic Physique Olympia stage for the division’s highest honor. Although the roster was stacked, Bumstead, Ruffin, Ansley, Ramon, and Kalecinski made headway from the moment they stepped on stage.

Ansley took home the fourth-place finish on his last Classic Physique Olympia appearance. He had finished third at the 2021 Olympia. Fans thank Ansley for everything he has done for the division. He will most likely be moving up to the 212 division the next year.

Kalecinski brought a great package. He has a flowing physique — broad shoulders, a tiny waist, and thick legs. He moved up a place to finish third at the 2022 O.

Terrence Ruffin is one of the best posers in the business, and he reminded us why when he started posing on the 2022 Olympia stage. Ruff Diesel knows how to work the stage and show off his physique. He had one of the best X-frames on the Classic Physique stage. However, he dropped out of the top five after a second-place finish at the 2021 Mr. O.

Ramon Dino has one of the most balanced and aesthetical physiques on the stage. His muscles were full, dense, and striated.

Ramon Dino and CBum were the two competitors in the final callout in the pre-judging round. While Ramon displayed great balance, symmetry, and conditioning, it wasn’t enough to hold off CBum. The three-time Classic Physique Olympia showed up in great shape. He had great shape, symmetry, balance, conditioning, and clean and clear lines.

Christopher Bumstead takes you right back to the golden era as soon as he starts hitting his poses. His thick upper pecs in the side chest pose remind you of the Governator Arnold Schwarzenegger in his prime.

It was lights out for CBum’s competition as soon as he started his posing routine. He was untouchable in every pose. He showed significant improvement in his legs from the last year. Bumstead was peeled to the bone and showed the best muscle size, definition, density, and balance. The separation in his quads, glutes, and hams made him stand out from the rest of the competition.

The 2022 Classic Physique Olympia was almost like a reminder of why Bumstead is the most decorated bodybuilder in the division.