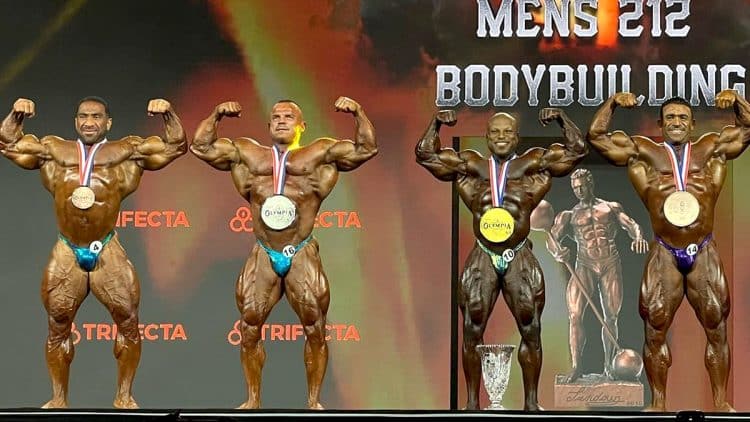 The 2022 Olympia finals in Men’s 212 Bodybuilding wrapped up on Friday, Dec. 16, with Shaun Clarida regaining his title, thus becoming a two-time 212 Olympia champion.

The title has been subject to a game of hot potato ever since seven-time 212 kingpin Flex Lewis decided to retire in 2018. While there were whispers about his potential move into Open bodybuilding, it never happened. Instead, Derek Lunsford, the reigning 212 Olympia from last year, accepted a special invitation to debut in the Open class at 2022 Mr. Olympia.

Since Lunsford decided to try out the Open and not defend his 212 title, it was up for grabs this year. During prejudging and finals, fans quickly took notice of Kamal Elgargni‘s shredded back. However, judges had a hard time ignoring the fullness and 3D musculature of Shaun Clardia, who earned the 212 title back in 2020.

Angel Calderon Frias also brought granite conditioning, which he used as an effective weapon to push Elgargni throughout the contest. By the time the show was over, ‘The Giant Killer’ Shaun Clarida secured his second 212 Olympia title. Additionally, Angel Calderon Frias finished runner-up and Kamal Elgargni took third.

Check out the official 212 Olympia results below!

Read also: All 212 Olympia Winners Since 2008 (and History of the Division)