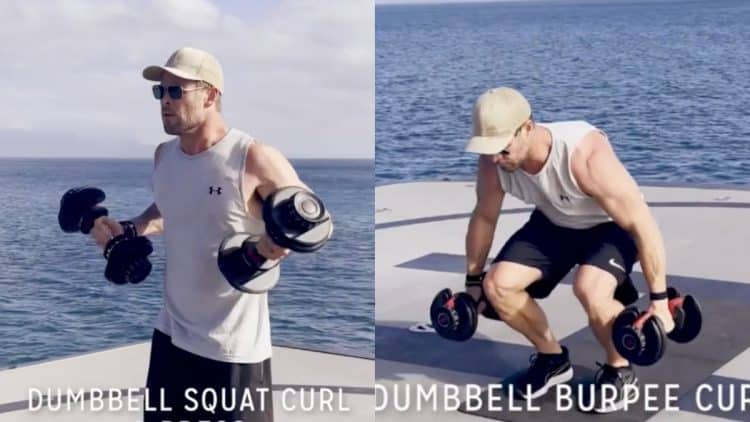 Marvel superstar Chris Hemsworth is widely recognized for having one of the most impressive physiques in Hollywood. In a recent video posted on Instagram, Hemsworth performed an insane 50 rep challenge.

Hemsworth was always into fitness and stayed in shape before taking on the role of Thor. He underwent a strict diet and training regimen to pack on the pounds, and the results are evident judging by the physique he showcased in his latest project Thor: Love and Thunder. Out of all the actors who portray fictional heroes, Hemsworth is one of the most accurate as far as comic books are concerned. He brought the superhero to real life with an almost identical look.

For the latest installment of Marvel’s Thor movie series, Hemsworth took his physique to the next level, gaining more muscle mass while maintaining his leanness. He likes to incorporate functionality in his training and utilized bodyweight workouts heavily for this epic transformation. Hemsworth shared the results of his hard work in a behind-the-scenes photo from the sets of the recent movie, which left Hollywood talking about his monstrous biceps.

Chris Hemsworth stays connected with his 56 million followers with demonstrations of his daily training. The A-lister started a fitness lifestyle app called Centrfit. He had previously stated that he would be sharing workouts inspired by the app for the next eight weeks after kicking things off with a no-equipment workout from the middle of the ocean.

In a recent video uploaded on his Instagram, Hemsworth returned to the deck of a naval ship to share an insane 50-rep workout that targets the entire body.

“Try this one out 💪🏻 Every 10 reps the exercise will change but the difficulty gets easier don’t stop until you hit 50 reps!!!”

Chris Hemsworth’s coach, Luke Zocchi, revealed that they had to come up with new ways to prepare him for the latest Thor project as it required him to get even bigger. Hemsworth had shared a heavy chest workout to show how he achieved such a ripped physique.

With a focus on sharing workouts with minimal or no equipment so that anyone can perform them, Hemsworth’s latest workout is the second of a series he will be sharing over the next few weeks.