Walker And Elgargni join forces to realize their Olympia dream. 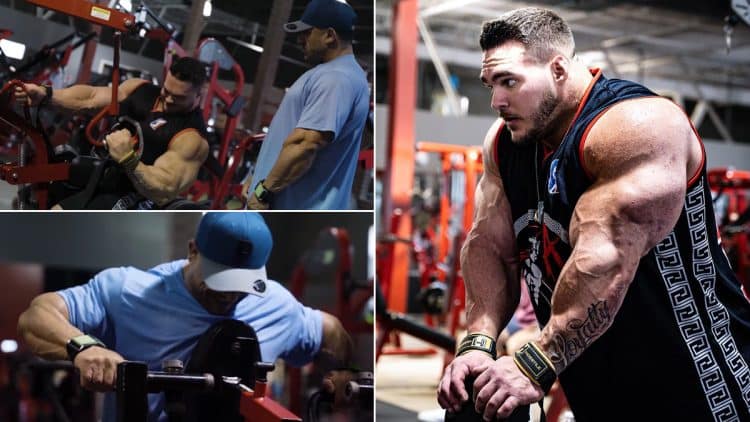 Bodybuilders Nick Walker and Kamal Elgargni recently teamed up for a holistic back day workout. After taking the year off from competition to improve his physique, Walker recently began his 2022 Olympia prep. The event will take place from Dec. 15 to 18 in Las Vegas, NV. Noted for his astounding victories at the 2021 New York Pro and 2021 Arnold Classic, The Mutant has quickly emerged as a force to be reckoned with in the IFBB Pro League Open division. He will attempt to improve his standing at the 2022 Olympia from last year’s fifth-place finish.

On the other hand, the 50-year-old Libyan-British bodybuilder is one of the frontrunners in his respective division and could be a problem for the reigning champion Derek Lunsford if he decides to defend his title later this year at the Olympia.

The 2019 212 Olympia winner grabbed a lot of eyeballs recently when he decided to compete in the Open Pro division this year. Remarkably, the 50-year-old placed second in his Open division debut at the 2022 Tampa Pro and secured fourth place at the Texas Pro shortly after. He is gearing for a better showing at his next show—the Ronnie Coleman Classic.

The bodybuilder duo went through the back workout on Aug. 22, and the video of this session was uploaded on Nick Walker’s YouTube channel.

On the other hand, plate-loaded machines are difficult to outgrow as a large number of weight plates can be added to them. This could be one of the reasons why Walker and Elgargni chose them over selectorized machines in this workout.

Walker and Elgargni started their back workout with this compound movement. It is one of the most prominent overhead pulling exercises as it activates your back, shoulder, and arm muscles.

While speaking about the Mutant’s work ethic, the 50-year-old said:

“With this training and this focus, Nick Walker’s going to bring his best version ever this year. It’s because he wants to, and he has a powerful, strong mindset. He’s gonna do it,” Elgargni said.

Following the single-arm lat pull-down, the bodybuilder duo performed the bent-over dumbbell row to build muscle and strength. While it was Walker’s idea to incorporate this movement in the session, he jokingly admitted that he should have avoided the exercise on this particular day.

Seated row on a plate-loaded machine

Walker and Elgargni next performed seated rows on the plate-loaded machine. They performed three sets each at a slow and steady pace.

Both competitors incorporated the progressive overload principle while performing the rack pull, increasing weight with each set. Elgargni finished the exercise with three sets, while The Mutant went ahead and performed an extra set to feel the burn.

This superset served as the finisher for Walker and Elgargni’s back workout. Supersets are an efficient way to do more work in a short period. Also, it results in an overall increased aerobic intensity due to short rest periods between sets. Neither man revealed the exact number of sets and rep range for this superset.

Walker and Elgargni Back Workout

With the 2022 Olympia 16 weeks away, Elgargni and Walker are working towards the same goal but in different divisions.

Walker will go up against experienced veterans like the reigning champion Mamdouh ‘Big Ramy’ Elssbiay, Brandon Curry, and young gun Hunter Labrada to realize his dream of becoming Mr. Olympia. Elgargni—who has been there and done that—needs to fend off young and hungry lions like the reigning 212 Olympia champion Derek Lunsford and former champ Shaun Clarida. With all said and done, both Walker and Elgargni are giving their absolute best to turn the tables in December.

You can watch the back workout video here, courtesy of Nick Walker’s personal YouTube channel: