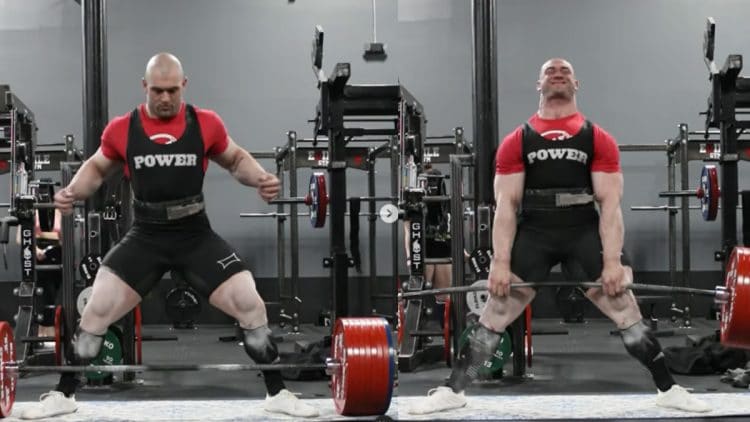 Danny Grigsby recently claimed the title of the greatest deadlifter in the history of powerlifting, having pulled more weight than anyone has ever done in a sanctioned competition. However, just two weeks after that, he is already smashing heavy weights at the start of his new preparation. On April 10th, Danny posted two reps of a 415 kg (915 lbs) deadlift on his Instagram account.

Danny Grigsby only utilized a lifting belt for this lift, which is considered raw under powerlifting standards. He was also deadlifting with a sumo stance and a hook grip. In the video, Danny’s deadlift was literally bar-bending, which just made it a bit more impressive. The deadlift bar is a type of powerlifting bar which is thinner, longer, and better for sumo deadlifting, has more bend and whip, which lets the bar to bend before the weight is pulled from the floor. The user can get to lift more weight by using this bar. Taking the speed of both of his reps into consideration, it definitely seems like he could have done more.

In the second slide of the Instagram post, Danny Grigsby can be seen hitting a new 8 rep PR on the deadlift. He did so by loading the bar with 350 kg (770 lbs), but he used lifting straps for this set.

It is unclear what weight Danny Grigsby was carrying around at the time of these lifts, but just two weeks ago, his bodyweight was 125.9 kg (277.5 lbs).

Danny Grigsby is mostly known for his deadlifting prowess, as he holds the All-Time Raw World Record across all weight classes. He has managed to do this at the age of only 28-years-old. This means that Danny will probably further improve his record, and his only rival seems to be Jamal Browner.

Danny Grigsby started competing professionally in 2013, and until now, he has taken part in 14 sanctioned competitions. Of those, Danny came out victorious 11 times.

Danny Grigsby is getting closer to the 501 kg (1004.5 lbs) deadlift with each training session. Only two men were able to pull half a ton officially, and they were Eddie Hall and Hafthor Björnsson. Ivan Makarov and Peiman Maheripour are also chasing the All-Time World Record Deadlift, but Danny Grigsby is definitely one of the favorites.