Powerlifter Browner is getting closer to accomplishing the heaviest deadlift ever done. 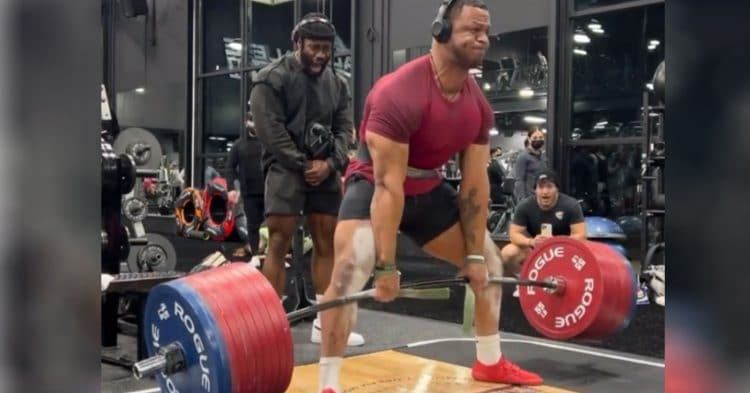 Jamal Browner, one of the world’s strongest pound-for-pound deadlifters, is pushing himself to be the best in the world, as seen by his latest training sessions. Earlier today, in lifting straps and a lifting belt, Jamal attempted a 501 kg (1104.5 lbs) deadlift using the sumo stance. In a powerlifting competition, lifting straps would be prohibited, but the deadlift is over 4.5x his competitive weight class. He published the lift on Instagram, not long after pulling 483 kg (1065 lbs).

Jamal’s 501 kg (1104.5 lbs) was sadly unsuccessful, but it was nothing short of impressive. Jamal stepped onto the lifting platform, adjusted his position, and attempted to lift it. He lifted the weight almost halfway, and battled for a few seconds, but wasn’t able to lift it.

Sumo stance is allowed in powerlifting, so If he ever manages to deadlift 501 kg (1104.5 lbs) in competition, it will be the heaviest deadlift ever done in the sport of powerlifting, across all weight categories.

The heaviest official deadlift in powerlifting currently belongs to an Icelandic powerlifter, Benedikt Magnússon. He deadlifted 460.4 kg (1015 lbs) at the 2011 Hardcore Clash of the Titans IV. Benedikt’s bodyweight at the time was 172.8 kg (381 lbs), while Jamal only weighs 110 kg (242.5 lbs)

Only two people have managed to deadlift 500 kg (1102.3 lbs) or more, and both were Strongman competitors. Sumo stance is banned in Strongman, so any sumo deadlift record would not count. Two athletes that lifted half a ton are Hafthor Björnsson and Eddie Hall, and they both lift conventional.

The first person to lift half a ton was Eddie Hall. He set the old deadlift world record of 500 kg (1102.3 lbs) at the 2016 Giants Live Deadlift World Championships. While attempting to set this record, Eddie completely deteriorated his health.

Hafthor Björnsson then broke Hall’s record and set a new one with a pull of 501 kg (1104.5 lbs). He set the record at his home gym because of Covid-19 restrictions back in 2020, while World’s Ultimate Strongman regulated the lift.

You can watch the two lifts compared side by side here:

Even though the sumo stance should be easier, all the Strongman athletes used a deadlift suit, while Jamal only used a lifting belt and wrist straps. The fact that he managed to completely lift it off the floor is an achievement by itself, and now it only seems like a matter of time until we see him lock it out. Jamal is not a competitive strongman but he is someone who could legitimately best Björnsson’s deadlift world record easily.