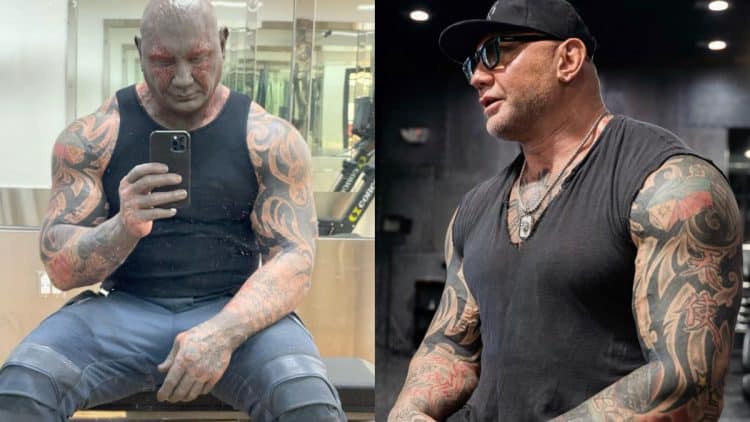 Dave Bautista first gained attention for his gigantic physique as a professional wrestling standout in the WWE. His first appearance on the silver screen came during his run in the promotion but Bautista eventually decided to leave the wrestling ring and follow his passion for acting. In a recent Instagram post, Bautista shared a massive behind-the-scenes workout photo while working on the set of Guardians of the Galaxy 3.

Bautista joined the World Wrestling Federation (WWF) in 2000, two years before the organization would change its moniker to World Wrestling Entertainment (WWE). He instantly became a fan favorite for his brash persona and crazy athletic abilities, earning him the nickname “The Animal Unleashed.”

He briefly explored professional mixed martial arts and even earned a purple belt in Brazilian jiu-jitsu under the legendary Cesar Gracie Academy. Along with his athletic endeavors, Bautista got the chance to start his acting career in 2006. He made his Hollywood debut in Relative Strangers before landing a bigger role six years later in the hit movie Riddick. His role as Drax The Destroyer in the Marvel comic book adaptation Guardians of the Galaxy (2014) skyrocketed his star power.

In April 2019, Dave announced that he would be stepping away from professional wrestling after a final appearance at WrestleMania 35. He retired at the age of 50 to focus on his acting career and has not looked back since.

In a recent Instagram post, Dave Bautista shared a behind-the-scenes workout photo from the set of the third installment in the Guardians of the Galaxy franchise, scheduled to hit theatres in May 2023.

“#BTS gettin a workout in during @guardiansofthegalaxy vol. 3 “

Bautista grew up with a love for working out and bodybuilding from a young age. In Nov. 2021, he shared a message with bodybuilding legend Flex Wheeler, who was battling a severe case of COVID-19. Bautista wished him a speedy recovery and extended his support during the tough time.

The 53-year-old A-lister has maintained his insanely muscular build. Earlier this year, Bautista shared that he was contractually required to consume a meal every four hours to keep up with his monstrous physique. Although he used to consume red meat in the past, he revealed he switched to a plant-based and pescatarian diet and eliminated red meat from his diet over a decade ago.

Dave Bautista opened up on his troubled childhood and how he used working out as an outlet for his aggression. He enjoyed being in the gym for the therapeutic benefits and admitted bodybuilding saved his life in an open and candid sit-down with Mr. Olympia president Dan Solomon in April.

The multi-talented Dave Bautista has dominated a number of different career paths while maintaining an incredible physique. In a recent...

Dave Bautista, also known as Batista in the WWE, has officially announced his retirement from professional wrestling after Wrestlemania 35...