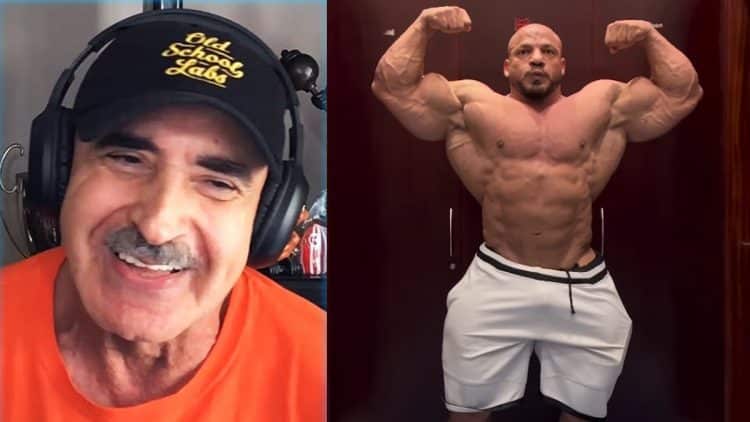 For most of the season, bodybuilding veteran Samir Bannout has provided unique insight regarding the Men’s Open division, a category he used to compete in during his days as an IFBB pro. According to Bannout, the two-time Mr. Olympia Big Ramy will face several obstacles en route to his third title.

For starters, both Andrew Jacked and Michal Krizo earned pro cards along with 2022 Olympia qualifications this year. Given their height, muscle mass, and shape, Bannout predicts they will shake up the standings at this year’s Olympia. In fact, at one point during the season, Samir was so confident in Krizo, he envisioned the Slovakian winning the Mr. Olympia crown in his debut performance.

All roads in the Men’s Open division lead to Big Ramy, who appears to be on track for his next competition. At 2021 Olympia, many, including Phil Heath, thought Ramy’s conditioning was off, but he’s since prioritized the ‘weakness’ and has openly talked about it during prep.

Similar to Ronnie Coleman‘s reign, Ramy has overpowered his peers with jarring size and a commanding stage presence. In a recent discussion with seven-time Olympia Phil Heath, Ramy specified that his plan is to step on stage at approximately 295 pounds. Bannout, joined by John Hansen and Nick Trigili, discussed Ramy’s potential package and who they believe to be the most dominant Olympia champion of all time.

“I saw some photos [of Big Ramy] he’s looking really good,” Samir Bannout said. “I don’t like that photo [the one Dennis James showed on his phone during a recent podcast]. Maybe it’s true.

I think when Ramy when he pops up he looks better than when he’s flat. I think he’s a massive guy. That one particular photo that Dennis James was holding on the phone — I don’t like that photo. I think Big Ramy is way better than that.”

Bannout suggested that Ramy has the potential to compete weighing as low as 280 pounds.

“I still think Ramy is definitely a front runner, but 315 [pounds]… oh my God. That’s insane. Ramy is under six feet right, he’s 5″11′. From my perspective Nick, I don’t really think he needs to be 315. I mean — he could compete at 280 if he wanted but the bottom line is you get in that condition about two weeks out, which is now.

We’re about two weeks out. Then, you go back up, and then you can pop pop. The muscles will look a lot fuller when you take a couple of weeks of recovery. So, the muscle will look more bouncy looking instead last-minute depleting,” Samir explained. “I think Chad and Dennis, they’re both experiences and he’s going to come in ready for sure. But I don’t think it’s necessary for him to be over 300 in my opinion. There’s no need for that.”

Bannout and Nick Trigili agreed that if Ramy brings a ‘freak factor,’ it’s going to be hard to push him on stage.

“When Ronnie Coleman came back in ’03 and had this whole freak factor and he was a whole different bodybuilder — they’re comparing Ramy to that. Yeah. They’re not saying that Ramy is as good as Ronnie. He doesn’t think Ramy could beat Ronnie Coleman but he’s just saying that the difference in his physique is going to be very similar to what Ronnie did, how dramatically different it was,” Nick Trigili told Bannout.

As long as Ramy stays healthy, Samir believes Olympia this year is just a fight for second place.

“I hope he stays healthy and comes in at his best ever. If he’s at 10 percent better than last year, lord have mercy. It’s going to be hard to touch him. Then, Mr. Olympia would be like looking for second place,” said Bannout.

Most Dominant Mr. Olympia Champion Ever?

Bannout named Ronnie Coleman as the most dominant Mr. Olympia champion of all time.

“Coleman — 2000, 2001 — untouchable,” says Samir. “Phil [Heath] in terms of combo — you know when it comes to combining beauty and overall balance, but when it comes to freakness and super-duper shredded with striations… I saw it with my own eyes. Ronnie Coleman was untouchable.

Whether it was like ’99 or 2000, right John, right somewhere around that. I couldn’t believe my eyes. There’s no way anybody can surpass that mass with quality simultaneously. Then, I would say Phil Heath would probably be a close second”

“Phil Heath had a beautiful flow. This is what you guys don’t always focus on. Phil Heath had the flow. There was no mistakes — good thighs, good sweep, diamond calves, beautiful arms. No. I’m telling you; Phil Heath is a bad ass bodybuilder. He’s really really good but size-wise, you can’t mess with Ronnie Coleman and that quality and size.”

The last time Bannout spoke about Ronnie Coleman, he reflected on ‘The King’s’ obsession with lifting heavy weight, which Samir says resulted in some health problems. When speaking on the matter, Bannout mentioned that Coleman should have set some boundaries in place to prevent him from sustaining damage or getting injured.

With 2022 Olympia on the horizon, Bannout is confident it’s a one-man show if Ramy is 10 percent better than last year. Should he bring dramatic improvements, Samir believes the title defense will be reminiscent of Coleman’s 2003 Olympia victory.