Turn into a KO machine with the Deontay Wilder diet and training plan. 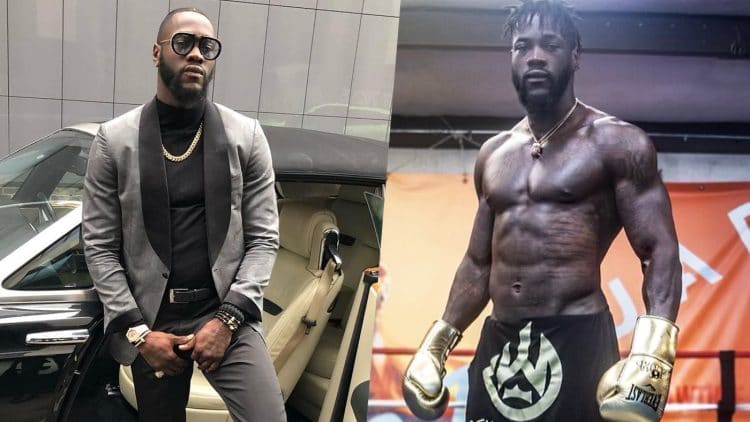 Deontay Wilder is one of the best boxers of our time. He has earned the reputation of a knockout maestro by winning 41 of his 45 fights with a KO. The American pro boxer held the WBC heavyweight title from 2015 to 2020 – making ten successful defenses.

As of October 2021, The Bronze Bomber is ranked as the world’s third-best active heavyweight by ESPN, fourth by The Ring magazine, and fifth by BoxRec and the Transnational Boxing Rankings Board.

All of that is impressive, but what’s Bronze Bomber all about, you ask?

Deontay Wilder comes from a family of preachers. He graduated from high school in 2004 and wanted to play football or basketball for his hometown, but destiny had other plans for him. The birth of his oldest daughter and poor grades caused Deontay to attend community college and give up on his dream of playing for his home team.

Unlike most other A-list boxers, Deontay had a late start to boxing. He stepped inside the ring for the first time when he was 20-years-old.

As an amateur, he won a bronze medal in the heavyweight division at the 2008 Olympics, hence leading to the nickname “The Bronze Bomber.”

Wilder is known for his extraordinary punching power, having knocked out every opponent he has defeated after turning pro.

Wilder made his pro debut in 2008 at the age of 23 against Ethan Cox. He knocked out his first pro opponent in the second round. By 2012, Wilder racked up a 25-fight win streak, winning all by knockout and all within four rounds.

Deontay Wilder won his first pro boxing title 14 years after making his debut. His devastating knockout power has been one of his biggest allies.

A boxer can be losing on all scorecards coming into the last round, only to nail a perfect hook on his opponent’s chin to win the bout. Wilder’s power has saved him (almost) on several occasions, including his three-match rivalry with Tyson Fury.

Deontay Wilder was being outboxed by Fury for the majority of their first fight, but he managed to end the match in a draw by scoring 9th and 12th round knockdowns.

He is regarded as one of the hardest hitters in the sport today with a 98% knockout-to-win percentage; he has knocked out 41 opponents in the 42 bouts that he has won, with 20 of those knockouts coming in the first round.

Wilder consumes anywhere between 6,000-8,000 calories every day depending on his fight schedule. Yes, the amount of calories is insane, but the 6’7″ 238 lb war machine handles it like it is no one’s business.

The Bronze Bomber’s diet is nothing typical. The former WBC heavyweight champ is blessed with insane genetics and an uber-fast metabolism. They allow him to feast on pancakes, sausages, eggs, all at the same time without a worry in the world.

While prepping for a fight, Wilder can eat up to six meals a day. Here is Deontay Wilder’s regular diet:

When asked about his diet, Wilder said, “They just feed me the food, I just eat it! My stomach sometimes can be so fat that I have to rub it for hours. I’m not a big eater!”

Deontay Wilder’s training consists of a unique blend of resistance and weight training, traditional boxing routines, and water training. Wilder’s trainer, Peter Khoury, ensures that he leaves no stones unturned in getting the Bronze Bomber ready for a showdown.

For his training, Wilder focuses primarily on sparring and mitt work. Contrary to what most people might expect, he barely does any heavy weightlifting or speed exercises.

“Heavy lifting results in too much shoulder development, too much strength and size, what’s happening is, you’re pushing the punches, as opposed to snapping your punches.”

The Bronze Bomber follows a four-day training regimen. Before each workout day, Wilder does a dynamic warmup consisting of stretching and movement drills.

1. Cone Agility Drill: 2 sets of 3 reps (one revolution around the cones is one rep)

Set up two cones three feet apart and move laterally around the cones in a circle. Focus on lateral movement and stability while changing directions.

“I love the water because it builds all your muscles in your body,” Wilder claimed. “I can’t even tell you the name of the muscles, that’s for sure, but I feel it.”

Deontay Wilder might not hit the weight room on rest days, but he is in the boxing gym every day, perfecting his craft. If you are not a boxer, go hiking, running, or swimming.

1. Rudiment Hops: Set up cones at a comfortable length apart to use for each set.

2. Cone Agility Drill (same from Monday workout): 2 sets of 3 reps around the cones

Although brute strength can be a blessing inside the ring, boxing is not about building ginormous muscles. Wilder uses his workouts to improve his explosiveness, agility, balance, and coordination.

1. Sand Pit Plyometric Moves: Although Deontay Wilder does these on the sand, you could perform them on a mat in the gym.

When not practicing in the pool, Wilder heads to the gym for a light boxing workout, which consists of hitting mitts and sparring. “You all have seen it,” he said. “I’ll come in here and just hit the mitts and spar. That’s it; no running, no conditioning and stuff, no heavy bag, no speed bag, no jump rope, no nothing!”

Deontay’s water-based activities are not limited to the pool. On his rest days, Wilder often goes kayaking toward an island near his house, taking full advantage of any wind resistance.

On top of that, it is reported that when Wilder is partying near a lake, he’ll have friends throw beer cans into the water and then swim out to retrieve them. He is even known to hang off the back of motorboats and then pull himself aboard as the boat picks up speed.

Not the kind of rest day you were hoping for, eh?

Deontay Wilder probably has the most unique training and diet program. But given his track record, it would be safe to say that whatever he is doing has been working for him.

While Wilder’s training program could help you build his trademark knockout strength, we would not recommend following his diet plan as it is unless you are his biological twin.