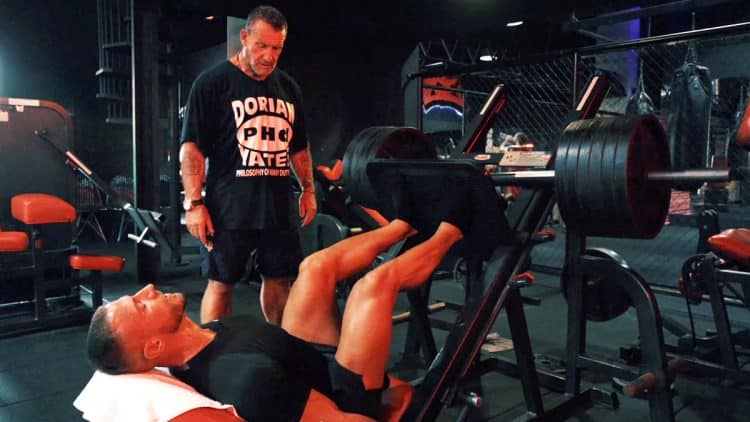 Bodybuilding legend Dorian Yates was known for pushing the limits inside the gym throughout his career. In a recent YouTube video, Yates walked Mike Thurston through a series of brutal leg workouts where he focused on warm-up sets and all-out sets to failure.

During Dorian Yates’ impressive tenure, he managed to win the prestigious Mr. Olympia title six times (1992-1997). Lauded for his exhausting workout routines, Yates’ dedication to the sport was highlighted by his relentless work ethic. He approached training with a chip on his shoulder. Instead of focusing on the number of reps/sets, Yates emphasized going to failure any time he trained at the gym.

At 60 years old, Yates hasn’t slowed down judging by the ripped physique he maintains in retirement. He’s been focusing on his health since stepping away from the sport. Even today, it’s evident that his preference for high-intensity training guided him to success.

Fitness model Mike Thurston’s online presence is massive. His YouTube channel has over 1.29 million subscribers, and he routinely uses it as a medium to share various workouts and fitness endeavors.

This isn’t the first time Mike Thurston has trained with “The Shadow.” He teamed up with Yates a few weeks ago for an intense chest and biceps training session. This time, Yates guided Mike through a series of demanding leg workouts.

Find all of the exercises practiced in the YouTube video below:

“The reason there is no second set, there is only warm-up sets and all-out sets. And if you do an all-out set on eight exercises to failure, and I can see that you’ve gone to failure… there is no point in doing anything more,” Dorian Yates told Mike Thurston.

“I’m letting you know, if you do one set to failure on each exercise, we’re moving on. If I think you haven’t done it, we’re doing another one. It’s up to you,” says Yates.

Yates suggested starting with a squat to get the muscles stretched before the workout.

During the squat, Yates placed his hand in the middle of his legs on the ground to enhance his stretch. He recommended Thurston bring his legs in closer to get the most out of this warm-up.

“You can feel the shoulder. You can feel the bottom of the glutes stretching. You’re just going to sit there for two minutes,” Yates shared. “Well, I tend to do the static stretching more after the workout these days. When the whole body loosens up, then I’ll do some mobility movements with you.”

For the next warm-up technique, Dorian guided Mike through lying bent knee oblique twists. Yates demonstrated this by pivoting his hips from side to side.

“It’s cool but it’s working around your lower back and your glutes — it’s warming that up. Now we’ll start with the first one now.”

Getting to the meat of the workout, Dorian guided Thurston through a series of reps on the leg extension machine. After finishing a set, Dorian told Mike not to sit after leg extensions because that delays recovery.

“Sometimes you feel it on the knees but this one [machine] is great. Twelve reps yeah.” Yates said. “If you sit still, you delay the recovery because you’re just sitting there and letting all the waste sit in your legs. If you move around a little bit and breathe — it’s tempting to sit down, of course, but it’s not the best thing to do.”

Yates implored Mike to fire off another set.

Before moving on, Dorian Yates explained that he only does cardio for 10 minutes a week. He added that during leg day, don’t focus on the number of reps, instead focus on performing ‘perfect reps’ one by one, until you’ve reached failure. Yates spotted Mike on the third set and then moved on to the next exercise.

Dorian Yates favors stretching before leg day because workouts like the lying leg press tax ‘everything,’ from ‘your hamstrings, glutes, and quads.’

“Now when you do it, because your quads are pre-exhausted, and your glutes and hamstrings are relatively fresh — you’re going to get more out of this as far as quad work. You’re going to feel this a lot more,” Yates said. “We’re not going to need to warm up too much, one or two sets to warm up, and then all-in.”

Yates added that adjusting the angle of the bench can drastically affect the workout and which part of the leg gets activated.

“It’s going to hit your rib cage before you get [a full] range of motion.”

“I’m surprised how warmed up my body is going straight into this weight,” Thurston told Dorian.

While Yates advocates for warming up prior to training, he said ‘excessive warm-ups’ can result in a waste of time. He told Mike that the focus is on his glutes and hamstrings during this movement. After Mike began to struggle, Yates encouraged him to finish off his last set to failure.

Again, Dorian told Mike to walk back and forth in the gym instead of sitting and resting.

“The bigger the muscles in action, the more oxygen required, “Yates added. “You’re going to use a lot of oxygen. So, it’s going to be a lot of oxygen debt after the set — meaning you have to rest longer after legs than you would on chest or delts.”

Next, Dorian and Mike moved on with machine hack squats. The four-time Mr. Olympia offered some tips.

“Find your foot position, it’s going to be dependent on your leg length generally. We’re going close yeah. Toes are bent out like that. We’re going to go down deep here,” Dorian said.

Yates told Mike that they aren’t doing cardio so there’s no need to rush sets.

After a period of much-needed rest, Mike Thurston got back to work with another set to failure.

For the second to last exercise, Yates guided Thurston through prone leg curls.

“The lesson to be learned there is: you don’t necessarily need to go to absolute failure beyond failure with every single body part. It’s very taxing on the nervous system as well.”

“You don’t need to force the leg. Just lock it with a little bend and then, keep it.”

After a 50-minute workout, Thurston was wiped out. Despite enjoying retirement, Dorian still carves out time to help others with lifting weights and dieting. Recently, the six-time Mr. Olympia shared advice for people struggling with gaining weight. He believes counting macros is a good starting point for someone interested in building more muscle.

Despite hanging up his posing trunks, Yates is still a force to be reckoned with inside the gym. Judging by the latest training session, Dorian Yates’ ‘near failure’ workout left Mike Thurston with an insane leg pump.