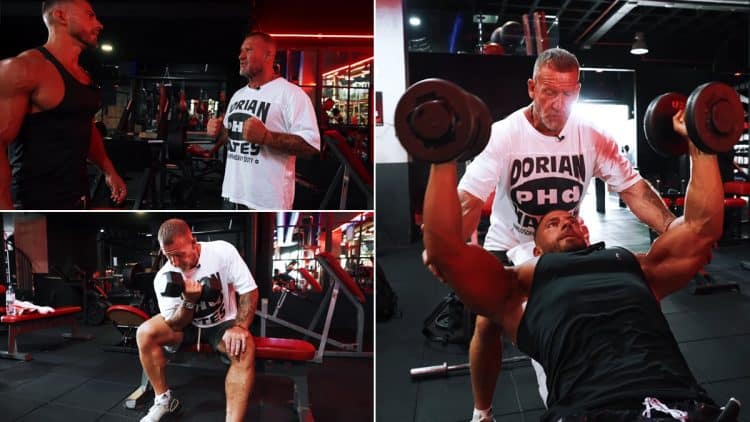 Retired bodybuilding legend Dorian Yates was known for his massive physique and spectacular back detail, which he developed mainly from exhaustive training routines. In a recent video, Yates guided fitness model/influencer Mike Thurston through an intense chest and biceps workout to near failure.

“My goal here is to take each exercise that we do safely to failure,” Dorian Yates told Mike.

Dorian Yates won seven consecutive Olympia titles from 1992-1997. His combination of sheer size and grainy muscle detail made him one of the most imposing champions to reign in the sport. During his impressive career, Dorian had a reputation for pushing the limits at the gym. Undoubtedly, his preference for high-intensity training positively impacted his physique given the accolades he earned.

At 60 years old, Yates still maintains a shredded build. He looks jacked several years following his retirement from bodybuilding. “The Shadow” has been vocal about prioritizing his health since stepping away from the sport.

Mike Thurston is a popular fitness model and entrepreneur. His online presence is felt worldwide with Thurston’s YouTube channel being home to over 1.29 million subscribers, in addition to his one million followers on Instagram. Thurston met with Yates recently for a detailed workout routine at the M13 gym in Marbella, Spain.

In addition to the full workout list, Dorian Yates provided tips throughout the training session, which you can find below.

*Sets and Reps were unclear based on the footage provided

During this exercise, Yates suggested using a ‘medium grip.’ He added, that depending on the length of someone’s arms, people use different grips to control the weight more effectively.

“Some body parts like back and legs, I do pre exhaust. I do an isolation exercise first, like a pull over. For back, leg extensions. For legs, I personally never found a real isolation exercise for pecs that I feel really works without putting too much strain on my shoulder. I prefer to start with a compound exercise on chest.” Dorian Yates told Mike.

When practicing decline bench presses, Dorian said if the arms are placed close together, then the triceps are used too much. Conversely, if the grips are too far apart, it results in a limited range of motion.

“So, you can see my forearms are kind of parallel to each other. A lot of people lift off and start from out here. Bring it over so it’s in line with your sternum. So, we lay, we are nice and tight. Come down, touch the sternum, then return.”

When asked about training partners, the six-time Olympia winner revealed he never trained without a partner because going to failure alone can be dangerous. Since lifters can be trapped under weight or a heavy bar, Yates believes that’s always in the back of someone’s mind when training alone.

Yates said machines enable lifters to get more out of negative movements. The bodybuilding legend added these practices help the lifter tax muscles while getting close to failure.

“We can take that as the second exercise just because we got control on there because it’s a machine. With a machine, I can give you extra negatives. When you fail positively, you haven’t fully failed because there will be still some strength in the negative. That’s why we try to slow it down on each rep, just so we can try to tax it and get it near to failure.”

Yates explained that certain exercises demand longer rest periods. He also discussed how he approached his weaker body parts in training throughout his career.

“The more muscle mass involved, the more oxygen debt. If you’re doing legs or heavy back, you’re going to have to rest longer than a chest… and chest is going to take longer than biceps.” Yates said.

Before the next set, Yates talked about his experiences using creatine. He said he didn’t notice the effects of the compound back when he was taking steroids. Now, with a clean system, he felt it ‘straight away’ and said he also felt ‘10%’ stronger.

“Negative range of motion is always stronger than the positive. Even when you’ve reached positive failure, there’s still juice left in the tank on that negative. This way we can exhaust everything. Positive, negative, finished.

“We want to do the job. We want to send the signal. But we have to recover from it. Stress, recovery, overcompensation, that’s the process. You don’t grow before you recover.” Dorian said.

“You don’t want to lock out at the top. That’s more triceps. We’re trying to keep the tension on the pecs. You’ll notice, you’ll get to a certain point and the resistance is falling off.”

Despite being known for his giant back, Yates admitted he was still concerned with aesthetics. For that reason, he always placed importance on conditioning and balanced proportions.

“The idea is to isolate the bicep. Push it to failure. And say when you go to a barbell curl, there’s going to be a little bit of shoulder movement, inevitably. It’s going to be looser, but it’s not going to matter because you already fried the biceps.”

Before starting the final workout, Dorian tells Mike about his commitment to stay fit in retirement.

“I do the weight training to maintain my muscle mass not to try to increase it, just to maintain it at a certain level. Then, I do some high intensity cardio intervals on the bike. Something like that. Yogo or Pilates for stretching or movement.”

“Chest and biceps done. 45 minutes. Something like that. Job done.” Dorian Yates said.

The two wrap up the training session and Mike tells Dorian he wants to train legs in two weeks.

Yates continues to advocate for prioritizing health in retirement. After revealing his use of steroids lasted over 12 years, Dorian said bodybuilders are pushing too many compounds, which are effectively turning them into ‘ticking time bombs.’

Yates revealed he no longer takes steroids. However, that hasn’t stopped the legend from dabbling with some recreational drugs. He has used psychedelic/hallucinogenic compounds like DMT (Dimethyltryptamine) and clarified that these experiences helped him see life through a different lens.

RELATED: Best Back Ever: Ronnie Coleman vs Dorian Yates

Despite stepping away from the sport professionally, it’s evident that Dorian Yates still has the knowledge that helped him become a world-class athlete. Following the workout with Mike Thurston, Yates demonstrated the importance of going to ‘near’ failure during each individual exercise.