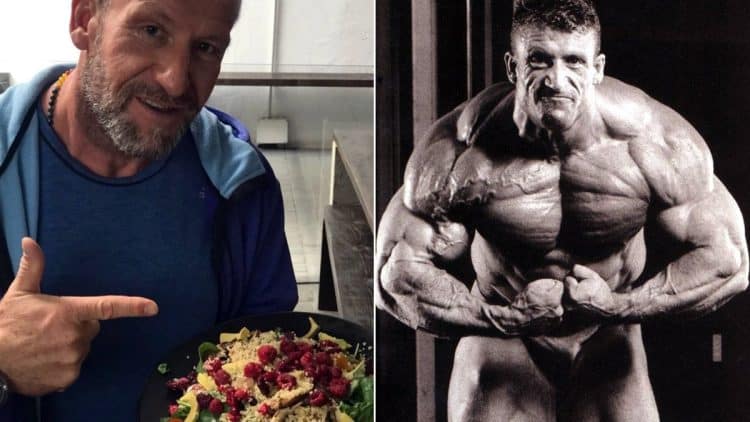 Retired bodybuilding legend Dorian Yates was renowned for having one of the best back developments ever. In a recent post on Instagram, Yates shared his advice on how to gain weight if you are struggling.

Dorian Yates got crowned the Olympia titles six times in a row from 1992-1997. His incredible definition on top of a monstrous frame made him stand out from the rest of the competition. Samir Bannout, a 1983 Mr. Olympia winner, commented on Yates winning the show based purely on his back. Bannout competed against Yates on the big stage and heaped praises on his diamond-cut calves, hamstrings, and mostly his Christmas tree back.

Yates is praised for having a strong work ethic. He preferred to train in silence to focus in on each exercise and let his physique reflect the results when it was time to perform on stage. The Englishman earned the nickname “The Shadow” based on his tendency to make improvements in the off-season.

The training he undertook made him lean, muscular, and fierce. In the course of Yates’s professional career, he maintained a self-described ‘monkish’ existence manifested in his desire to be the most muscular man on earth. Over those six years, he won the Olympia title, “The Shadow” achieved everything he set out to. He was a sight to behold, due to the size and conditioning he possessed that had never been witnessed before.

The retired bodybuilder regularly shares tips with his 1.4 million followers on Instagram. He was famous for performing high-intensity training and encouraged that effective HIT systems offer a plethora of health benefits, including restored confidence and positivity.

The HIT principles were adopted by him, and he trained with Mike Mentzer at Gold’s Gym prior to his first Olympia title in 1992. It is clear that Yates is a strong advocate of HIT, and he followed Mentzer’s recommendations from both a training intensity perspective as well as the number of sets necessary for growth. At first, Yates attempted only one set to failure, but as time progressed he performed several warm-up sets before attempting one to two sets to failure.

Dorian Yates breaks How to Gain Weight If You Struggle

In a recent post uploaded on his Instagram, Dorian Yates shared his advice on solving the weight gain dilemma. He took a detailed approach to lay out the potential pitfalls and offered possible remedies to help those who struggling with putting on the pounds.

Many people tell me they “eat like a horse” but they “can’t gain weight”.

When I sit and write down what they’ve been eating, it turns out, they’ve been burning as many or more calories than they take in.

If this is you, then you’ll need to raise your caloric intake with quality calories if you want to gain more weight.”

First, have a plan…

Know exactly what you’re eating on a daily basis. From grams of protein, grams of carbs to grams of fat.  This way, you know where to start adding small increments of nutrients that you need.

Second, understand that the more muscle you carry, the more calories you’ll need to take in.

Third, keep in mind that if you have a faster metabolism, you’ll burn more calories.”

Related: Trying to gain weight? Our weight gain calculator will help you determine a daily caloric intake to help your weight gain/bulking journey!

The 60-year-old has long moved on from his days of stepping on the podium but maintains a phenomenal physique in retirement. He is still very lean and boasts a ripped pack of abs that a lot of the younger guys would be envious of.

He was recently seen guiding fitness model Mike Thurston through an intensive chest and bicep workout to near failure.

Having been a Mr. Olympia six times, Yates has probably had the greatest influence on the development of bodybuilding. Therefore, it is not surprising that fans still regard him so highly.

How To Do Plyo Jack – Benefits, Alternatives and Muscles Worked

Bulking is one of the most popular ways to build muscle and gain body weight, especially amongst bodybuilders. During a...

Competitive bodybuilding demands a spartan lifestyle and everyday sacrifices that most of us can’t even think about making. Following a...