The dumbbell raise is a useful exercise for rounding out the shoulder muscles, giving impressive width to the upper body. Learn how to do this exercise with tips, variations, and more. 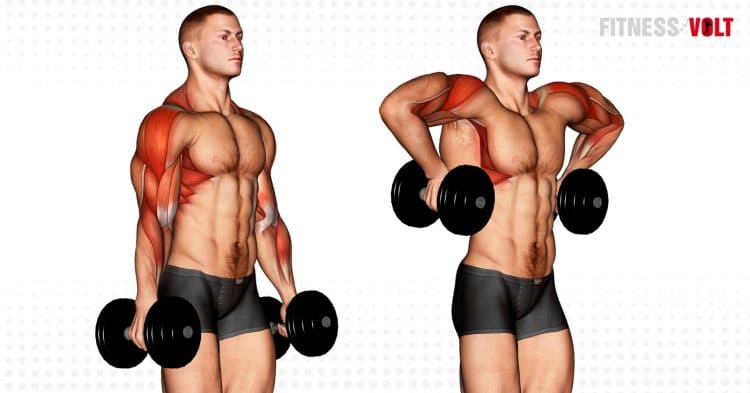 Do you want wider, more impressive deltoids? Consider including the dumbbell raise, also called the armpit row and monkey row, in your shoulder training routine. This variation involves raising dumbbells up along your torso to activate the lateral or outer portion of the shoulders.

It’s not your conventional later raise but we have a feeling you’ll it because it keeps shoulder training interesting.

Follow along to learn more about this exercise including how to do it with tips, variations, and how to include it in your training.

We know this exercise to work the deltoid lateral or side delts. But hardly any exercise involves just a single muscle. Below are the other muscles included in the movement.

The deltoid lateral is one of the three shoulder heads located between the front and rear delts. It gives width to the upper body and abducts raises the arms out to the sides from 15-100 degrees as the other two heads stabilize the arm.

The deltoid posterior or rear delts is one of the three shoulder heads located on the backside of the upper body. It helps to stabilize the arm for movement of the deltoid lateral, works with the lats to extend the arm while walking, and is involved in transverse extension (e.g., rowing exercises).

The biceps brachii is a fancy term for biceps. Almost everyone is familiar with this show muscle that is located on the front of the upper arm and has two heads.

Its role is supination and flexion of the forearm, and it has a small action on the shoulder joint as well. While it’s not the target muscle and it doesn’t get worked a lot, it’s still involved to a degree.

The brachialis is a muscle deep to the biceps, located on the outer side of the arm. It’s a strong elbow flexor that gives width to the upper arm when developed.

The brachioradialis is a forearm muscle. It’s involved during all lifting and pulling movements, just like the biceps, and primarily functions to rotate the forearms in both directions, but it also flexes the elbow.

The serratus anterior is located along the ribs and is also known as the boxer’s muscle. That’s because it’s heavily involved in the protraction of the arms or pulling the scapula (shoulder blades) over the thorax, making punching motions possible.

This muscle also works with the trapezius muscles to upwardly rotate the scapula or lift things overhead.

The trapezius or traps as they’re commonly called is a large muscle that spans across the upper back near the shoulders; it’s trapezoid-shaped.

It has three sections of fibers; upper, middle, and lower, all of which are responsible for separate functions although they work together to control the movement of the scapula.

The upper fibers upwardly rotate the scapula and extend the neck. 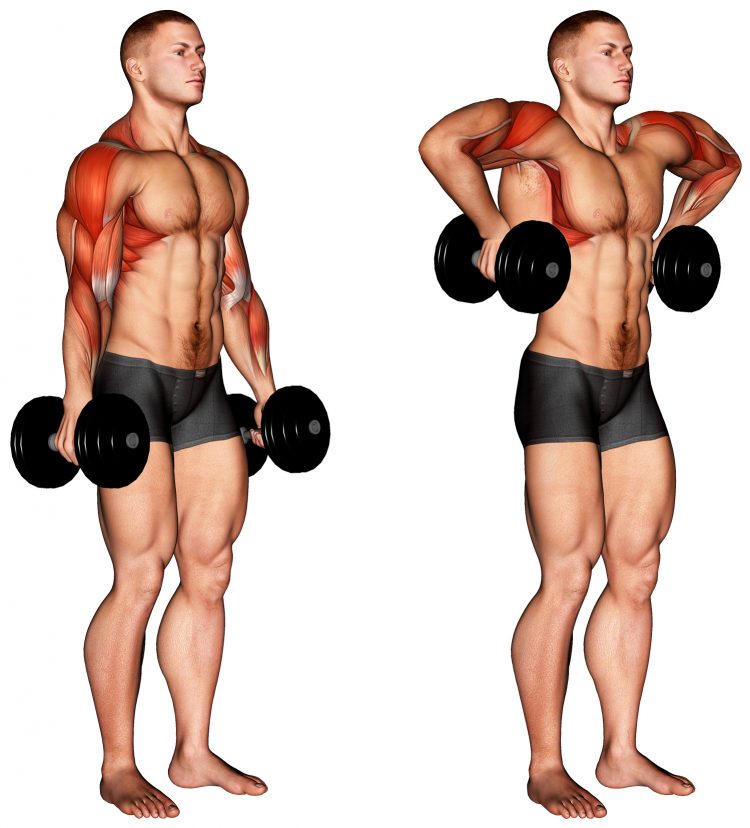 Shrugs are the most popular exercise for targeting this muscle group but you’ll feel them during dumbbell raises.

Here are three very effective variations/alternatives that we recommend.

Shrugs are a time-tested exercise that builds huge traps and upper back muscles and also works the deltoids.

Instead of pulling the weights up like with the dumbbell raise, you elevate the shoulders to activate the upper back muscles.

When you do shrugs, raise your elbows to get a more pronounced contraction in the traps.

You can also use cables or resistance bands to do this exact exercise. This is especially a good alternative if you don’t have dumbbells but even if you did, there are benefits to using both as long as you can implement progressive overload.

The lateral shoulder raise and all of its variations are a must if you’re going to maximize your delts development. And, of course, your traps and upper back muscles get some work too.

You can do this movement so many different ways and it’ll no doubt slap size and roundness onto your upper body.

How To Incorporate The Dumbbell Raise Into Your Training Routine

We recommend including the dumbbell raise and its variations in your shoulder workouts at least once per week. We know shoulder presses are the primary go-to exercise for building muscular shoulders but you need a lateral raise variation to further emphasize the side delts.

A good example shoulder workout would include a front raise (optional as it’s heavily involved in all pressing exercises), a lateral raise, and a rear delt raise of some sort.

How many sets and reps will depend on your experience level and exercise routine. But in general, we recommend at least 3 sets of anywhere from 8-20 reps.

The weight used should vary between workouts as some days you can go heavier, and on others, you can train lighter with more reps. Both are very effective for building impressive shoulder muscles and strength.

This isn’t set in stone but just a suggestion.

The dumbbell raise is an unconventional yet effective exercise that you can do to build your deltoid lateral muscles. It gives nice width to the upper body and can make your waist look smaller too.

Don’t forget about the variations and alternatives too as it’s always good to mix things up for maximum gains!

Hany Rambod Details Hadi Choopan’s Insane Journey To Get To 2020 Mr. Olympia: ‘It Was Like A Movie’