Here's a killer ab workout Dwayne Johnson did with an NFL great. 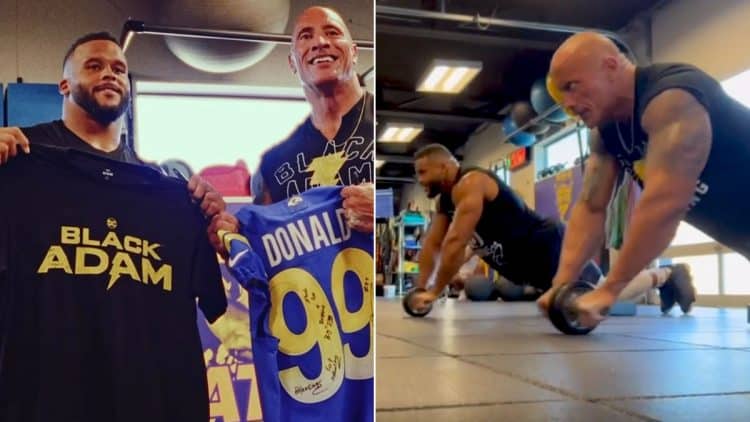 It is no secret that Dwayne “The Rock” Johnson appreciates fitness and greatness, and he has always been an advocate for a healthy lifestyle. Additionally, he consistently trained multiple times a day, which helped him build a humongous and shredded physique. This is even more impressive considering that he stands at a height of 6 feet, 3 inches (193 centimeters).

Johnson’s sheer size quickly became one of his greatest attributes, which, alongside his acting skills, made him one of the most recognizable figures on the TV screens. This also translated to his personal life, so there are now a total of 337 million people following The Rock on Instagram.

Many of Dwayne Johnson’s Instagram followers tune in to check up on his training sessions and pick up some advice which could end up benefiting them. Luckily, The Rock is active on social media and even makes his posts better by featuring some sporting icons. Most recently, The Rock shared a brutal ab wheel rollout workout, which he performed in synchronized motion with NFL star, Aaron Donald.

These ab wheel rollouts are without a doubt one of the more difficult core workouts, but once mastered as this duo has, it can work wonders. Adding ab rollers to any core workout is a great idea. You can use them at home or at the gym to strengthen and tone your core.

During a previous interaction between Dwayne Johnson and Aaron Donald, The Rock explained that they now share a deep conection. Dwayne revealed that they posses a similar mentality and that their fathers raised them the same way.

“We’re cut from the same intense cloth with our passion for training, family and LEGACY.
But what really moved me about Aaron, is realizing how we were both raised by very similar fathers who taught us at the exact same age – there is no substitute for hard work, through discipline and tough fatherly love.”

As part of his efforts to make his new film the best it can be, Dwayne Johnson has been working extremely hard. Although everyone is waiting for October 21st, 2022 for the official release, The Rock is the main character of “Black Adam”, which is inspired by the identical character from DC Comics. Seeing that the actor for Black Adam had to represent one of the most powerful forces in the universe, Dwayne Johnson was the obvious choice.

On the other hand, Aaron Donald just began another season with the Los Angeles Rams, where he has spent his entire 8-year-long NFL career. Often regarded as one of the greatest modern defensive players, Aaron has already achieved a lot. He is 31-years-old currently, but if he continues performing like he has in the past, Aaron could become a hall of famer.

Check out The Rock and Aaron Donald’s full interaction and workout here:

When doing ab wheel rollouts, people make the mistake of focusing too much on rolling out as far as possible at the beginning. However, if you do that, you are likely to suffer from lower back pain. Before performing the full ab wheel rollout, it is important to develop an understanding of how your abs fight lower back extension. If you do not, your spine will be put under unnecessary stress.

It is probably hard for Dwayne Johnson to find training partners due to his strength and size, but Aaron Donald is definitely one of the rare ones who could match him. However, both men are absolute beasts, which they display through amazing feats of strength. The most recent one was the explosive ab wheel rollout workout.

Related: Dwayne Johnson Shares The Breakfast He Eats To Get Shredded For ‘Black Adam’ Movie

How To Do The Reverse Dip – Benefits, Variations, and Muscles Worked