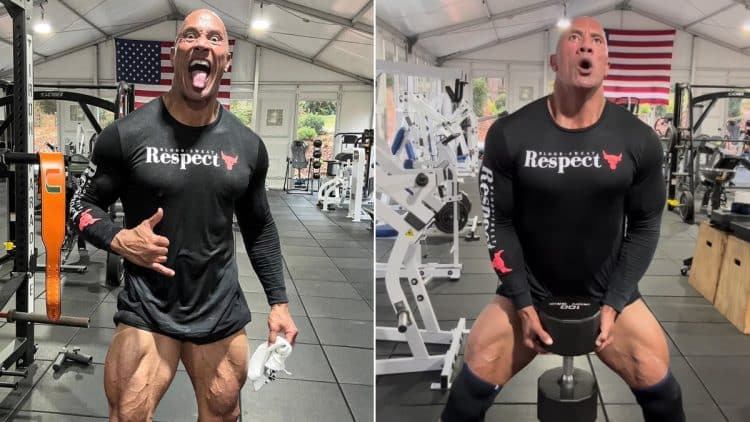 Dwayne ‘The Rock’ Johnson prides himself on being the hardest worker in the room. As one of the most successful and busiest actors in Hollywood, the former wrestling star never fails to get a workout in. In a recent post made on Instagram, The Rock shared an intense finisher workout routine for leg day.

Johnson first gained attention for his time in professional wrestling as one of the biggest stars of WWE. After a historic run in pro wrestling, he decided to switch to the entertainment industry. With a strong work ethic, Johnson found success in Hollywood and became the highest-paid actor in 2020 for the second time in a row.

With over 345 million followers on Instagram, Dwayne is one of the most followed people on the planet. He encourages his fans to maintain a healthy lifestyle. Along with his fitness, The Rock is also famous for his epic cheat meals. In September, he added a monstrous post-workout breakfast cheat meal to his list. He devoured a huge selection of breakfast foods like pancakes, cornbread, turkey bacon, and eggs.

In addition, The Rock regularly collaborates with other celebrities and recently joined forces with NFL player Aaron Donald, a defensive tackle for the Los Angeles Rams. The pair crushed a brutal ab wheel rollout workout together while bonding over the similarities in their upbringing.

In a recent post made on Instagram, The Rock performed a brutal ‘killer finisher’ workout routine that he used at the end of a leg day. He can be seen going through the training session at his home gym, aptly named ‘Iron Paradise,’ which he regularly uses for his workout videos.

He was using a 100lb dumbbell and performing a sumo squat with 3-second negatives and a 1-second pause at the bottom.

He shared the following rules for the exercise:

Here is the full workout below (all performed back-to-back with no rest):

Dwayne ‘The Rock’ Johnson never shies away from pushing himself. For the recently released DC movie Black Adam, Johnson took his physique to the next level for his titular role in the film. He shared some exercises that he used to build superhero quads for the project.

The Rock teamed up with Aaron Donald again for another workout session as of late. They went through a brutal warm-up featuring a one-arm dumbbell bent over row superset to kick things off at the LA Rams training facility. The latest addition of the killer finisher workout comes as no surprise as The Rock continues to test himself during each and every training session.