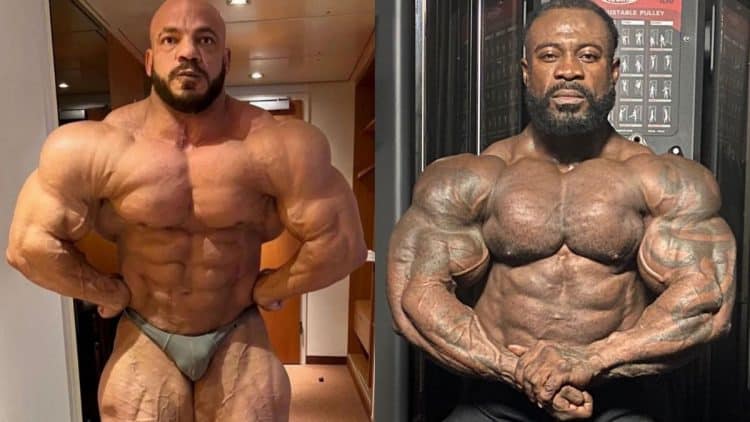 Preparations for the upcoming 2022 Olympia are in full swing. From grizzled veterans to upcoming prospects, this year’s edition is turning out to be one of the most exciting and competitive. In recent posts made on Instagram, Mamdouh ‘Big Ramy’ Elssbiay and William Bonac shared impressive physique updates six and a half weeks out from 2022 Olympia.

Two-time reigning Mr. Olympia Big Ramy will look to defend his throne and capture his third Sandow trophy. Ramy had a rocky start to the season as he missed his guest posing appearance at the Pittsburgh Pro. Although Ramy apologized to Jim Manion and the IFBB Pro League in May, fans raised questions about his commitment to the sport.

The mass monster enters the contest this year as a favorite. Bodybuilding icon Jay Cutler backed Ramy to dominate his competition again this year. Eight-time Olympia winner Ronnie Coleman also believes Ramy will be the clear victor and already congratulated him on his future victory.

Ramy’s coach, Chad Nicholls, guaranteed that Ramy looks better than ever at 325 pounds, courtesy of an epic physique update over two weeks ago. According to legendary bodybuilder Lee Haney, ‘you gotta be sliced and diced to slay Ramy‘. The eight-time Sandow trophy winner does not see anyone outsizing him and argued that the only way to defeat him would be to ‘out-pretty’ him.

In a recent Instagram post reshared by Fitnessvolt, Ramy showed off a physique update six and a half weeks from 2022 Mr. Olympia, scheduled for Dec. 15-18 at Planet Hollywood Resort & Casino in Las Vegas, Nevada. Ramy looks shredded and plans to further dial things in as the competition gets closer.

Despite initial speculation, Big Ramy has erased any doubts about his dedication to the sport. He previously shared a crazy back shot alongside Nick Walker, one of the division’s most promising contenders. Last week, Ramy guest posed at the Dennis James Classic and looked phenomenal.

In a recent Instagram post, William Bonac shared an impressive physique update. He can be seen going through a posing routine and showed off his unreal conditioning in another photo.

In September, Men’s Open division standout William Bonac talked about his plans to play the size game against the champ at Olympia. He believes adding mass was one of his biggest hurdles for this season, so he’s worked on being as heavy as possible. As a result of his intense training, Bonac shared a massive physique update where he tipped the scales at 264.6 pounds (120.3 kilograms).

Nicholls, who also coaches Bonac, stated that everything was on target with Bonac’s progress and went as far as to say, “this will, without a doubt, be the best William Bonac we’ve ever seen.”

Four-time Mr. Olympia Cutler gave his breakdown of the lineup for the upcoming event. Cutler stressed that Bonac is not one to count out but cautioned him against the danger of debutant Andrew Jacked. With so many contenders eager to prove themselves on bodybuilding’s most prominent stage, Cutler expects the event to be one of the greatest ever.

Bonac also revealed the bulking diet he’s used to prepare his body for another Mr. Olympia contest. In one of his recent workouts, Bonac joined forces with MMA legend Melvin Manhoef for an explosive full body training session.

Before this update, Boanc shared a taxing chest workout that he used to build his signature muscle density. William Bonac and champion Big Ramy are leaving no stones unturned in their preparations for 2022 Mr. Olympia given their latest updates.