Eddie Hall is now helping his son overcome ADHD through exercise as well. 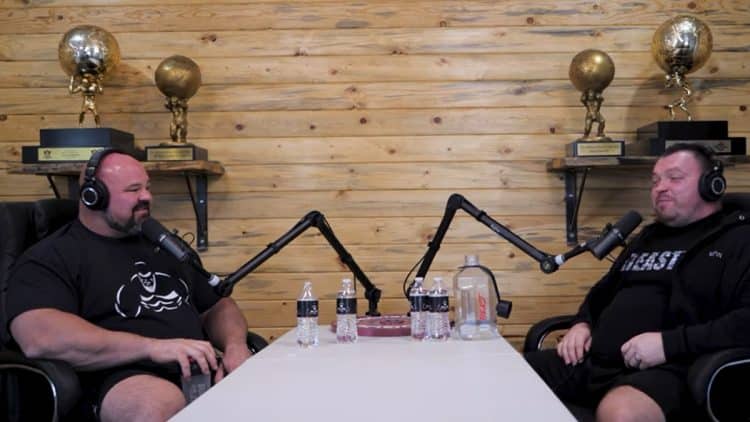 A number of people are born with some form of disability or disorder, which can complicate their lives. Nevertheless, some individuals are able to overcome these disorders and make the best of their circumstances. Eddie Hall is the prime example, as he had Attention Deficit Hyperactivity Disorder (ADHD), but still found success in everything he did. In a recent appearance as a guest on Brian Shaw’s YouTube podcast, Eddie discussed this topic in detail.

The term ADHD refers to attention deficit hyperactivity disorder. The condition is medical in nature. The development of a person’s brain and the activity of the brain are affected by ADHD and influence their ability to pay attention, sit still, and maintain self-control. A child who has ADHD may have difficulties at school, at home, or in their relationships.

Eddie Hall touched up on how his son has ADHD and how he realized that he was the same in his younger years. Seeing that he was full of energy, Eddie found that exercise was the best way to manage his ADHD. This ultimately led him to find some historic success, as well as helping his own son.

Seeing that Eddie Hall was incredibly active in sports at the age of only 12-year-old, Shaw inquired about the reasons for Eddie’s competitiveness at the time. It was difficult for Eddie to provide a direct answer to that question, however, he mentioned his son and how exercise helps him burn off excess energy.

“Well I think there is not really a single answer for that… Now I’ve grown up and I’ve got a son of my own, and he has got a lot of what they call disabilities but I don’t… I suppose the worst one is ADHD, where they’re just hyperactive. He’s always bouncing about… the best cure for it is exercise, because it expels all the energy.”

Upon looking back at Eddie Hall as a child, his parents noticed that he also behaved in the same manner, which led them to conclude that he also had ADHD. In addition, Eddie believes that the problems he had in school were caused by ADHD, since he didn’t have a problem learning, but just with behavior.

“I was definitely a victim of that. I definitely had ADHD… Learning was easy, behaving wasn’t.”

As the system at that time did not recognize these disorders, Eddie Hall was always punished, put in detention, and eventually expelled from school.

“Back then ADHD wasn’t a thing. So there wasn’t any sort of help for that.”

Eddie Hall has found solace in sports that he now trains daily with his son to fill that “void” for him. Furthermore, Eddie now believes that his swimming career in his early years played a significant role in his success, despite it not being his intention or that of his family.

“We were filling that void by accident by making me do the swimming. I think it’s the ADHD that got me so obsessive with it. I had to be the best and I just had so much energy. I used to go to training and I found it so easy.”

As a young teenager, Eddie Hall was one of the most incredible swimming talents in the whole of Great Britain and was also en route to compete in the Olympics. However, his priorities changed later on due to multiple reasons, but his obsessiveness carried on into his Strongman days. Obviously, that culminated with him becoming the 2017 World’s Strongest Man and the first person in history to deadlift 500 kilograms (1,102.3 pounds).

“It carried on into my adulthood with Strongman, bodybuilding and whatever else.”

Eddie Hall competed in a total of 31 International and National Strongman competitions, nine of which were victories. He retired at the beginning of 2018, but is now preparing to come back for just one competition. Hall will be the captain of Team UK at the 2022 World’s Strongest Nation contest, which is scheduled to take place on November 26, at the M&S Bank Arena, in Liverpool, England. Eddie still pushes himself in the gym daily, which has also helped him preserve incredible strength and power.