Kamali opened up about a path to victory for "The Mutant," and gave his thoughts on several other Men's Open Olympia title contenders. 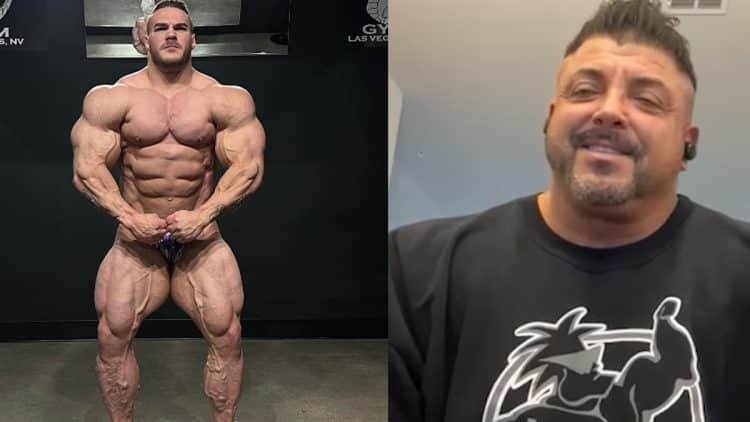 Retired IFBB Pro King Kamali (Shahriar Kamali) competed from 1994 to 2006 and graced some of the sport’s most prominent stages. In a recent interview, Kamali discussed how bodybuilding has changed, Masters Olympia, and the upcoming 2022 Mr. Olympia contest.

Known for aesthetics and balanced proportions, Kamali separated himself from his peers with an appealing physique. During his career, Kamali faced several top-tier athletes like Flex Wheeler, Shawn Ray, Rich Gaspari, and Kevin Levrone.

While he never laid claim to an Arnold or Olympia title, King Kamali earned the respect of the bodybuilding community with hard work. His boisterous and vocal nature lends itself well to tackling the sport’s current events.

The last time he looked at the 2022 Olympia lineup, Kamali doubted Derek Lunsford’s chances at the show. In September, Lunsford accepted a special invitation to compete in the Men’s Open at 2022 Mr. Olympia. Since Lunsford is the reigning 212 Olympia champion, he is qualified to compete in both divisions. Kamali believes Lunsford might get outsized if he chooses the Open, however.

In his latest interview with Muscular Development’s Ron Harris, Kamali opened up about how bodybuilding has changed, drug culture, 2022 Mr. Olympia, and whether he would entertain a comeback to the sport.

King Kamali Compares ‘Magazine Era’ To the Sport Today: ‘We Had It Good’

According to Kamali, IFBB Pro bodybuilding careers have changed drastically over the years. In the ‘magazine era’ prior to the internet, bodybuilders were stars even as amateurs.

“I’ve had this conversation hundreds of times with people, we had it best. Gen X we had it so good. The way we had it – the comradery, the shows that we had. Everything was in a different sense than how it is [now]. When you were at the nationals, the USA champion and the national champion were already stars!

You were already a star — Dennis Newman, Chris Cormier, Flex Wheeler, Paul Demayo, these guys were stars before they even went into the Pros. Now, I challenge you: name the last three national champions,” says King Kamal.

During his tenure, Kamali shared how prestigious it was to appear on the front cover of a magazine.

“Being on the covers of magazines meant something. It was a prestigious thing. It was just a whole different world.”

Kamali Says Conditioning Will Decide Next Olympia Champion, Lays Out Path to Victory for Nick Walker

The Persian native has high hopes for Nick Walker at his second-ever Mr. Olympia show. While Kamali says the sport struggled to catch up to the muscle definition of middle eastern athletes, he believes that’s now changing.

“I love Nick Walker man. I like his attitude. I like what he’s bringing. Andrew Jacked, for now I’m like okay, now we’re getting somewhere. The conditioning and the hardness of the middle eastern guys, Hadi and those guys are bringing. Yeah, I’m starting to see that.
We got Hunter [Labrada] in there, yeah we got [Derek] Lunsford. It’s exciting. Let’s see what we got this year. Hopefully they’ll bring the conditioning, all of them and we’ll have a great show,” says Kamali. “So far as of last year Ron, the only guy I saw who had Olympia level conditioning was Hadi [Choopan]. He’s the only one.”

King admits reigning two-time champ Mamdouh ‘Big Ramy’ Elssbiay‘s physique isn’t pleasing to the eyes, but his overwhelming muscularity makes up for it.

“He’s not pleasing to the eye but the overwhelming muscularity but If Chad [Nicholls] can bring him [Big Ramy] in the same condition when he won the New York Pro [debut in 2013]. That’s what I remember. With that condition and the size he has now, if he can do that, he’s still going to be champion.”

“But Andrew Jacked, wooo — that guy is insane. Samson [Dauda] if he can get dry. Who knows what Lunsford is going to look like next to these guys. If Hunter Labrada can get that film of water off of him. If Nick [Walker] didn’t get too blocky from adding on that extra 10 or 15 pounds this year and come in crispy.”

He added that he spoke to Walker recently and implored him to stay focused on conditioning ahead of the contest.

“I told Nick forget that size stuff now that you’re in Vegas. Conditioning! If Nick brings Hadi-type conditioning, he’s dangerous. He’s going to be dangerous. But let’s see if they can bring it.”

Kamali Reveals Weight of 268-Lb on TRT, Shuts Down Masters Olympia Comeback: ‘Not Even For $2 Million’

Stepping away from the sport in 2006, Kamali has remained in stellar shape. He revealed that he takes 150 supplements a day, consumes eight meals, and weighs 268 pounds currently.

“First of all, I get my blood work done every three months. I give blood every two months. I’m on it. I take 150 pills every day and all of it is detox. I take care of myself. I drink three gallons of water a day and steal eat eight meals a day not because I’m trying to force feed myself but because I’m hungry.”

King Kamali specified that he would never return to the sport because that would require him to take excessive amounts of bodybuilding drugs.

“What I’m doing right now is TRT (testosterone replacement therapy). If I’m on the TRT and I weighed in this morning at 268 pounds, 268 pounds with TRT. Imagine, just imagine, if I started taking Insulin, Growth, Tren, Var — all the things you have to do to be at that level. I would be back to 300 pounds,” Kamal said.

Kamali would not return to Masters Olympia even if he were offered $2 million.

“I don’t want to do that anymore. I have no interest in doing that anymore. But at the same time, I can I also go to the gym,” says Kamal. “If you put $2 million dollars in front of me, I wouldn’t do it [Masters Olympia]. I”m content with it.”

Given the close proximity of the contest, veterans and legends have thoroughly discussed the 2022 Olympia lineup. Eight-time champion Ronnie Coleman predicted that Big Ramy will not only win but will hold on to his champion status for the next three to four years. Other veterans like Samir Bannout have suggested newcomer Michal Krizo will win Olympia in his debut at the show.
RELATED: Bodybuilder King Kamali Saves A Woman’s Life With Incredible Strength
With many labeling this year’s Olympia as one of the greatest in years, Kamali hopes competitors prioritize conditioning. Even though he named Ramy to win the event, Kamali isn’t ready to count out contenders Nick Walker, Andrew Jacked, Samson Dauda, Hunter Labrada, and Derek Lunsford.