Bonac crushes a leg workout as the 2022 Olympia draws closer. 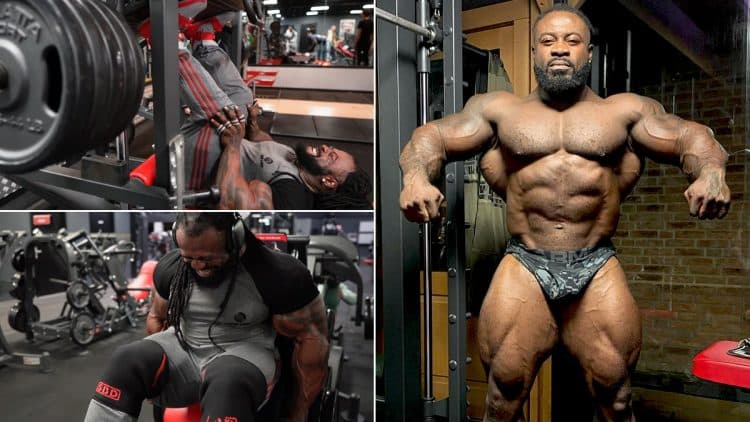 William Bonac is working quietly to derail many hype trains at the 2022 Olympia. The Ghanaian-Dutch IFBB Pro bodybuilder has been a perennial contender in the Open division for almost a decade. Bonac has won nine pro shows in his bodybuilding career, and winning the 2020 Arnold Classic marks his biggest competitive achievement. He is an eight-time Mr. Olympia participant and came close to winning the title at the 2019 Olympia when he finished second behind winner Brandon Curry.

Bonac had a bit of a bumpy ride over the last couple of years due to the global pandemic and slipped to the sixth spot at the 2021 Olympia. But 2022 has been a whole different story. Curry was a favorite heading into the 2022 Arnold Classic, and young up-and-comers had intrigue surrounding their performances. However, Bonac made an unexpected but solid comeback and walked away with a runner-up finish behind Curry. Many experts even believed that Bonac deserved the nod from judges. However, gynecomastia and a relatively underdeveloped mid-section were cited as the reason for his loss. The 40-year-old emerged victoriously at the 2022 Boston Pro soon after, securing a direct qualification to the 2022 Olympia. He vowed to fix the issues that cost him the win at Arnold’s.

Bonac has looked absolutely shredded in his physique updates which is a testimony to the intense work he is putting into this prep. In recent weeks, he has shared his diet and training videos to give a glimpse of his prep. Bonac has also helped other athletes in their endeavors in spite of having his hands full. The 40-year-old recently went through a complete leg day workout as part of his competition prep. The video of this session was uploaded on his YouTube channel. So without further delay, let’s take a closer look at the detailed account of this session.

Bonac kicked off the leg day with this quad isolation movement. Additionally, leg extensions are on the money when it comes to warming up the knees. Since the knees are a crucial joint in performing most lower body movements, it’s beneficial to sufficiently warm them up before jumping into heavier compound movements.

Bonac performed the leg extensions unilaterally first to focus on the movement and then performed a few sets with both legs.

The Dutch powerhouse next took to the leg curls for hamstrings work and performed three variations of this exercise. Leg curls are also a potent way to warm up the knees, but they put a lot less stress on them. This makes leg curls one of the ideal movements to start the leg workout.

Each of the three leg curl variations emphasizes different parts of the target muscles. Hence, it is necessary to incorporate them into your training routine.

This served as the first heavy compound movement of this training session. This compound movement works almost all the lower body muscles. It gets its name because the weight stack moves straight up and down rather than at an angle.

It is the only type of leg press that requires you to lift 100 percent of the weight as you lift it directly against gravity. However, this exercise can put a lot of stress on the lower back at the bottom of the movement, and you need excellent hip mobility to do it. Bonac did a few heavy sets of vertical leg presses and moved on to the next exercise.

Bonac took to this compound exercise next. While quads are the primary target muscles of linear hack squats, this exercise also targets the glutes, hamstrings, and hip flexors as well as lower back muscles but to a lesser degree.

Bonac performed all the sets of this exercise with slow and controlled motion and took to the pendulum squats next.

The 2020 Arnold Classic winner next took to this compound movement. While quad and glute hypertrophy is one of the prime benefits of this exercise, it can be made more hamstrings-focused by changing foot placement. Bonac did a few sets of this movement and jumped into another heavy exercise.

William Bonac next performed the good ol’ leg press. But he did partial reps on this exercise. Bonac worked his way up to the top set with nine plates on each side and took to the next exercise.

Simply put, belt squats work all the lower body muscles that the traditional barbell squats do and at a relatively similar effect. However, the weight is tied to the belt around your waist instead of your shoulders, which leads to significantly less spinal compression. Hence, belt squats can be an excellent addition to your routine if back issues are stopping you from squatting heavy.

Bonac cranked out some solid sets of this exercise on the plate-loaded machine and moved on to the finisher of the day.

Bonac did seated calf raises next to work the soleus. He did a few sets of this exercise with a slow and controlled motion. It served as the finisher of Bonac’s leg workout.

Bonac intends to play the ‘size game’ with reigning champion Mamdouh ‘Big Ramy’ Elssbiay at the 2022 Olympia. Although he has been forewarned by veteran bodybuilder Flex Wheeler against it, Bonac is doing his level best to achieve his goal.

Whether he succeeds in dethroning Big Ramy or not is a different matter. But Bonac’s and even Brandon Curry’s names have gone under the radar with the rise of hot prospects and young contenders like Nick Walker, Andrew Jacked, Michal Krizo, and Hunter Labrada in the Men’s Open division. As witnessed at the 2022 Arnold Classic, Bonac is still one of the most elite bodybuilders and has the potential to derail the hype trains. As Jay Cutler once said: Do not count out William Bonac and Brandon Curry just yet.

You can watch the full workout video below, courtesy of William Bonac’s YouTube channel: