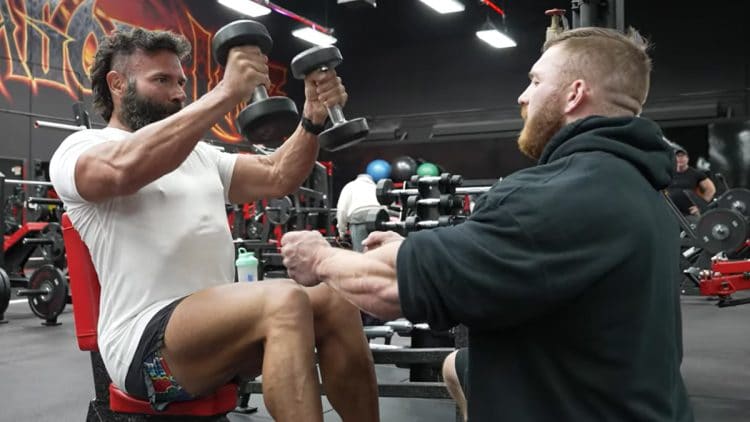 212 kingpin Flex Lewis is widely regarded as one of the best talents to ever grace a bodybuilding stage. In a recent YouTube video, Lewis joins the mega-popular social media influencer Dan Bilzerian for a shoulder workout routine.

Flex Lewis is a staple of the 212 division, having won the most prestigious title in bodybuilding (212 Olympia) a total of seven times consecutively (2012-2018). His reign as a 212 Olympia champion was historic and he separated himself from the rest of his competition with shocking muscularity and conditioning. As a result of just one of his 212 Olympia victories, the Wales native earned his invitation to compete at the show in the 212 division for a lifetime.

After taking a step away from the sport, it was unclear when fans would see the former 212 champion back in action. Speculation mounted during his hiatus as many continued to wonder if/when Lewis would make his anticipated debut in Men’s Open bodybuilding. However, the 38-year-old professional dropped a bombshell on his podcast earlier this month and formally announced his retirement from the sport, leaving behind a storied legacy still intact.

In addition to being an extremely popular social media influencer, Dan Bilzerian has ventured into acting on the green screen. His quirky and fun personality guided him into a couple of roles in action-based films like Extraction, which stars notable Australian actor Chris Hemsworth.

The Florida native has also taken part in The Equalizer, a film headlined by Denzel Washington. Taking time away from a busy schedule, Bilzerian joined one of the most successful champions in bodybuilding history to train shoulders.

The two kick off the short routine with some unconventional workouts. During the first exercise, Lewis helped Bilzerian by spotting him.

“So today, we got the man, the myth, the legend [Dan Bilzerian], jumping in on shoulders. He’s going to teach me one or two things.” Lewis jokes.

After hitting a brutal machine shoulder workout, Lewis is taken aback by how challenging the session became before pushing Bilzerian to complete the current contraction.

Lewis and Bilzerian move on to modified seated lateral dumbbell raises next.

The former 212 Olympia champion and Bilzerian practiced some cable crossovers before wrapping up the unconventional routine. Once again, Lewis offered to help Bilzerian with some of the finer movements on each of the exercises they trained.

You can find a full YouTube video of their workouts below

Lewis maintains an incredibly busy training schedule despite stepping away from the competition. The former 212 champ recently joined hands with Men’s Open competitor Rafael Brandao, who captured gold at the 2022 Arnold Classic South America. Clearly, his time training alongside Lewis paid off in a big way as Brandao also earned his invitation to compete at the upcoming 2022 Mr. Olympia contest this Dec.

Bilzerian, who leads a life that many of us dream of having, is committed to his training regimen even while taking part in a number of different commitments. With a bodybuilder as decorated as Lewis, the social media influencer sponged up any knowledge he could while training shoulders.