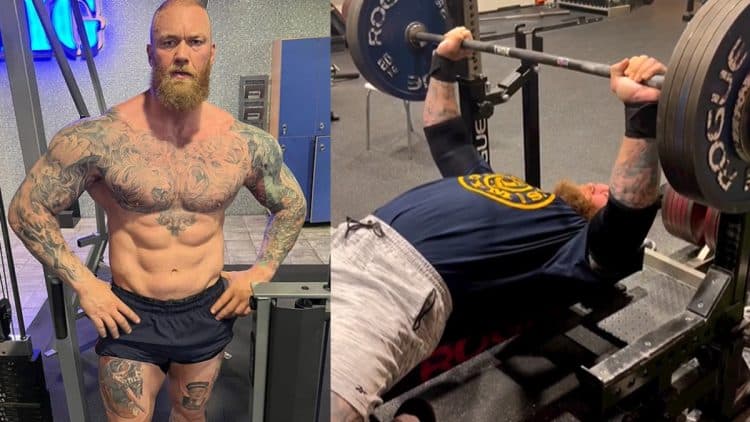 The boxing ring has been the mainstay of Hafthor Björnsson’s life for the past two years, but a sudden change in thinking recently has brought him back to what he loves. As he stated, he had no passion for boxing, however, strength sports still held a special place in his heart. Consequently, Hafthor is currently preparing for a powerlifting competition, which is set to take place on December 3rd. Seeing that only seven days are left until the contest, Hafthor posted an incredible 195-kilogram (429.9-pound) paused bench press on his Instagram.

As this was Hafthor Björnsson’s last heavy training session of this preparation cycle, his physical strength is almost at its peak. That enabled him to perform the 195-kilogram (429.9-pound) bench press with impeccable form and a significant pause with the barbell on his chest. In addition, Hafthor did not show any signs of struggle, which means that he could surpass the 200-kilogram (440.9-pound) mark at the contest.

In his Instagram caption, Hafthor Björnsson indicated he wasn’t rested enough to perform at his best. So, considering how tired Hafthor was at the time of his 195-kilogram (429.9-pound) paused bench press, it makes his feat of strength even more impressive.

“4 hours of sleep. No breakfast… some would call that fasting. No music and training at 3am. My last heavy session before December 3rd. 195kg bench with a pause.”

Hafthor Björnsson also revealed that he is happy with how his preparation has gone and confirmed that his ultimate goal is to Total 1,000 kilograms (2,204.6 pounds) at the competition. For anyone wondering, the livestream of the competition will be broadcasted on Hafthor’s YouTube and Twitch channels.

Hafthor Björnsson, however, was also a remarkably successful powerlifter. He took part in five sanctioned competitions and won four of them.

Hafthor scored all of his competition PRs at the 2018 WRPF-Iceland Thor’s Powerlifting Challenge. However, it is important to note that he weighed 197.5 kilograms (435.4 pounds) at that time and that he has lost a mind-blowing amount of weight since then.

The reason for losing this much weight was Hafthor Björnsson’s transition from Strongman to boxing. Luckily, it turned out just the way he had hoped, as he managed to beat his biggest rival, Eddie Hall, on a unanimous decision on the judges’ scorecard. Before fighting Eddie Hall, Hafthor stepped into the ring with an arm wrestling icon, Devon Larratt. However, Larrat did not pose a massive challenge for Björnsson, since he finished the boxing match early with an impressive TKO in the first round.

Apart from his powerlifting comeback, Hafthor Björnsson also made a partial return to Strongman not too long ago as well. He appeared in the 2022 Rogue Invitational and set a new Weight Over Bar World Record by clearing the height of 23-feet 3-inches. Hafthor also held the previous record of 20-feet 2-inches, but having seen that no one was able to break it for multiple years, he decided to do it himself. Interestingly, he also teased a full comeback to Strongman in his interview afterward.