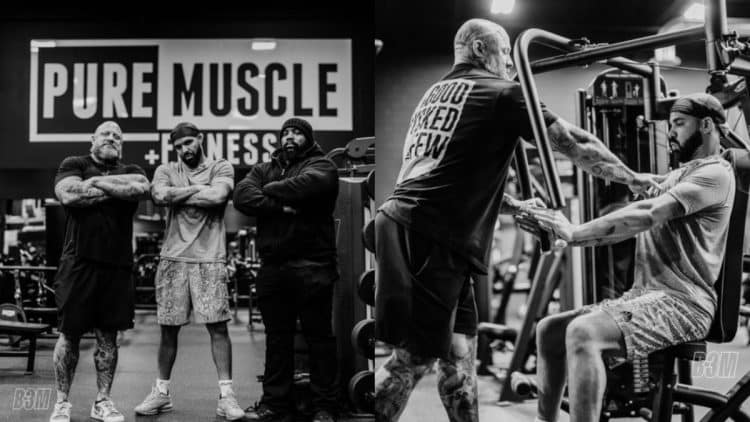 Rapper and entertainer Drake (Aubrey Drake Graham) is inundated with obligations as a celebrity but carves out time to exercise when he can. In a recent collaboration, Drake demolished a workout with Canadian bodybuilder Mike Van Wyck.

“Got some work in today with the Wycked one, proud of our brother,” Drake wrote on his Instagram Story while sharing a photo of his workout.

Before diving into a music career, Drake made a name for himself as Jimmy Brooks in the teen drama series Degrassi. As a rapper and lyricist, his popularity skyrocketed in 2009 after signing with Lil Wayne’s Young Money Entertainment company. His first three albums (Thank Me Later, Take Care, Nothing Was the Same) were huge successes and propelled him into the limelight further. The 36-year-old is one of the most successful rappers of this generation and has been the recipient of multiple Grammy Awards.

Throughout the late 2000s, a wave of Canadian bodybuilders made their way over to the NPC/IFBB Pro League. One of which was Mike Van Wyck. He sported a massive back and was revered for his size, which led to him winning a number of national championships. His lone competition in the IFBB came at the 2010 New York Pro, however, he was unable to reach the podium and finished 13th. While he entered the 2011 Toronto Pro, Wyck was forced to pull out of the show after suffering from food poisoning.

In addition to building an impressive physique, Wyck was known for his grit, tenacity, and especially his strength. He is considered by many to be one of the strongest bodybuilders of all time. For Wyck’s latest training session, he linked up with Drake and led the superstar through a rigorous bodybuilding workout.

On Tuesday, November 22, 2022, Drake was seen pumping iron in the company of IFBB Pro Mike Van Wyck. Mike guided Drake through reps on the seated chest press machine in the clip provided by their Instagram accounts.

“Get up, get back” wrote Mike Van Wyck.

After catching a glimpse of their training session, bodybuilders joined the comment section to commemorate the encounter.

In a separate post, Drake was seen taxing his upper body with dumbbell bench presses and on the lying chest press machine.

Drake is one of the latest rapper/entertainers to start taking his health more seriously. Hip-hop legend Busta Rhymes has also begun taking measures to preserve his health. He furthered his fitness goals with the help of perennial Mr. Olympia contender Kai Greene. They trained chest together back in 2020. Rappers have also tested their mettle with strongman workouts. Action Bronson teamed up with 2019 WSM winner Martins Licis to annihilate deadlifts last year.

Aside from the aforementioned icons, 51-year-old ‘Method Man’ continues to turn back the clock with lift after lift. He routinely shares feats of strength on social media and the last time fans saw him perform a workout, he blasted through a 500-pound deadlift. Another rapper who recently tested his strength was Lil Uzi Vert. He pulled a 262-pound trap bar deadlift, respectively.

With the holidays and the new year approaching, many celebrities and fitness enthusiasts are laying out their plans for staying/getting fit. Taking their latest training session into account, it looks like fans can expect to see Drake take part in more bodybuilding workouts in the months to come.