"The Mountain" is sporting a ripped pack of abs in his latest trimmed-down physique update. 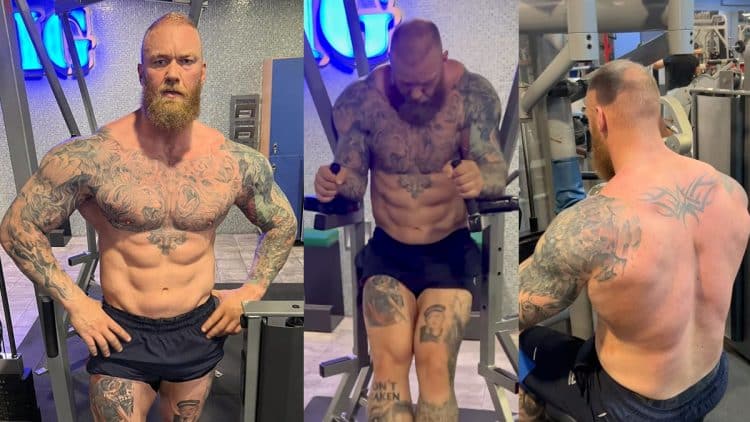 While he no longer competes as a strongman professionally, that hasn’t stopped Hafthor Bjornsson from pushing the limits inside the gym. In a recent post made to Instagram, Bjornsson showed off a lean physique update after drilling his abs and back during a strenuous workout.

Bjornsson is a strongman veteran, who has won the sport’s most prestigious title at the World’s Strongest Man contest in 2018. He developed a reputation in the sport for his staggering feats of strength. Thor holds the record for the heaviest deadlift ever recorded in competition at 501 kilograms. Years later, despite a number of attempts, his record has yet to be broken.

Setting their wrist wraps aside, strongman rivals Eddie Hall and Thor recently fought each other in a highly publicized boxing match. While Bjornsson favored combinations in the fight, Hall instead used his power against the Icelandic star. In the end, Hafthor was declared the winner on the judge’s scorecards via unanimous decision.

Since that fateful night, there have been rumors swirling that Bjornsson and boxing heavyweight champion Tyson Fury would mix it up in the ring. The two have taken turns calling each other out, with Thor suggesting that he’ll be ready for the blockbuster showdown in November. Though, judging by Bjornsson’s recent Instagram posts, perhaps those plans are on the back burner.

Last month, “The Mountain” was spotted at a bodybuilding posing seminar. Given the weight he’s lost since his last boxing match, many believe Thor’s physique has only continued to improve. He revealed that he’s lost at least 13 pounds since squaring off with Hall. While it’s unclear what his next move will be, one thing is certain,
Bjornsson is in great physical condition judging by his latest update.

“Back attack and abs today after 12 hours of hardcore day at work. Filmed a very physical fight scene all day while being exposed to the ☀️ Thankful and blessed to be in good health and great physical condition! 📈🦾” wrote Hafthor Bjornsson on Tuesday.

According to the Game of Thrones star, this workout came after a 12-hour workday. He added that he filmed a physical fight scene in the sun before sharing the post.

Even though he’s unsure if he’ll ever square off with Tyson Fury, that hasn’t stopped Thor from training as if the match is already scheduled. Many believe Fury possesses some of the best footwork in the sport, though question how the dominant champion would fare in the ring against a man similar in stature.

In addition to Fury, another opponent on the table for Thor is ‘The World’s Scariest Man’ Martyn Ford. He was scheduled to face Iranian Hulk (Sajad Gharibi) in a boxing match, but it fell apart before the two met inside the ring. Months removed from the cancelation; Ford revealed that the bout never materialized due to health and safety concerns for Gharibi.

Outside of boxing training, Bjornsson has proven his strength at a lighter weight. He recently deadlifted 320 kilograms (705.4 pounds) for two reps and made it look easy. At this juncture, it’s unclear what is next for Bjornsson in combat sports, but he is making sure to stay incredibly fit in the meantime.

How To Do The Lying Crossover Stretch – Tips, Benefits and Alternatives