Hafthor Björnsson Fires Back at Martyn Ford Over ‘Knockout’ Comment: ‘I Think I’ll Smash Him.’

Hafthor Björnsson reveals that he would be down to come back to the ring against Martyn Ford. 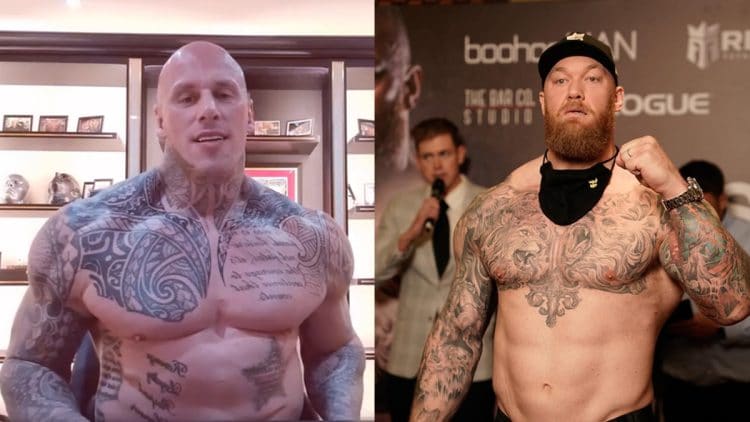 Coming off an impressive victory against Eddie Hall in ‘The Heaviest Boxing Match In History’ on March 19th, Hafthor Björnsson has a new potential opponent in mind. He is looking to fight Martyn Ford, also known as ‘The World’s Scariest Man’. Ford is also a great friend of Eddie Hall. He was openly rooting for Hall, and firmly believed that he would win. However, Björnsson convincingly outboxed Hall and won by unanimous decision.

Hall started off strong in an attempt to defeat Björnsson in the first two rounds. He managed to rock Hafthor several times, but he couldn’t keep the pace after the first two rounds. Hall’s powerful strikes sent Björnsson to the ropes, but Hafthor’s lethal combinations dealt serious damage. As a result, Hall ended up with multiple cuts on his face.

Martyn Ford is now one of the few people who could match Björnsson in terms of size and power. Ford believes that he would win against Björnsson and get revenge for Eddie Hall, as he stood ringside and supported him in the recent match.

“Watching it as someone who loves boxing, you can see what the problem was, there were big, big shots swinging in which were going to blow his energy.

“He wanted to hit the one shot but it’s not going to work. You’re relying on a lucky shot to get your knockout and you’re not working our man, you’re not throwing your combinations, his head was static, his hands were low and Thor’s got a reach advantage.

“I said before that Eddie had two rounds to win and then it’s going to get harder and harder because Thor has alright movement and has a very good reach on Eddie [Hall].”

Even before the Eddie Hall fight, Hafthor was saying that he would be open to fighting Martyn Ford.

“I am not getting any younger, so it would have to make sense, and it would have to be sooner rather than later. I am not going to be thinking about names, but someone asked me before if I would fight Martyn Ford. He is a friend of Eddie Hall and as you know, I am focused on Eddie right now. I am definitely open to discuss something versus him if the opportunity were there.”

Martyn Ford will have to get past Sajad Gharibi, also known as the ‘Iranian Hulk’, first. Their bout will take place on April 30th, inside the famous O2 Arena in London, England. Hafthor Björnsson also gave a prediction for the match.

“I think Martyn Ford is going to win. The other guy doesn’t look in shape at all. I don’t know the other guy, though.”

There is still a possibility that Hafthor Björnsson will face Eddie Hall again. Following his recent victory, he seemed open for a rematch, which has been incorporated as a clause into Bjornsson and Hall’s contract.

Hafthor Björnsson and Martyn Ford are extremely similar in multiple ways. Björnsson stands at 6-feet 9-inches tall, while Ford is just one inch shorter. Both men are carrying incredible amounts of muscle mass. Their physiques are also shredded and covered in numerous tattoos. Björnsson and Ford are also both movie stars.

Hafthor Björnsson has accumulated some extremely valuable experience since adjusting his training for boxing just 2 years ago. He looked incredible in the fight against Hall, having perfected the technique. However, no one doubted Björnsson, as he is considered to be one of the greatest athletes in the past decade. This means that he has the work ethic and with a good plan, he could achieve anything. Considering that this was his fourth boxing match, it is safe to say that he is getting very comfortable in the ring.

Martyn Ford is also very experienced in combat sports, as he has done MMA, Brazilian Jiu-Jitsu, and boxing for many years now. He also had multiple training sessions with some of the greatest fighters in the world, which includes the Kickboxing World Champion, Rico Verhoeven.

Related: Martyn Ford Says His Dream Fight Would Be Against Dwayne ‘The Rock’ Johnson

On multiple occasions, Hafthor Björnsson has expressed his desire to continue fighting, and if Martyn Ford wins his next match, he could be the perfect opponent. However, we will have to wait a bit longer to find out what happens next.