Hafthor Björnsson and Eddie Hall weigh a combined 648.5 lbs (294 kg) for the heaviest boxing match ever. 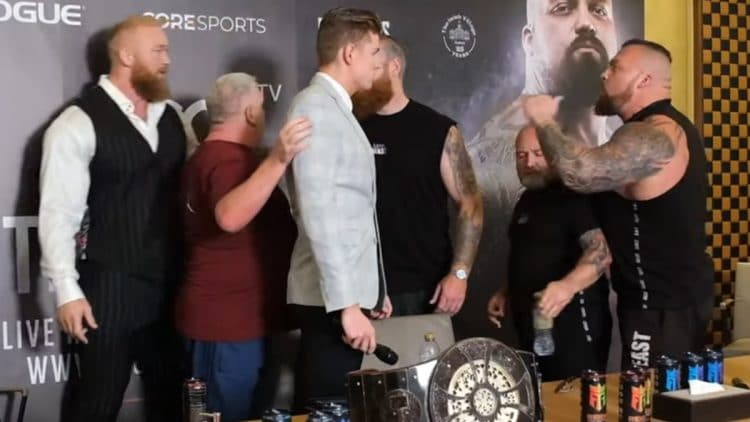 With two days left until the Heaviest boxing match in history, Hafthor Björnsson vs Eddie Hall, both former strongmen have been hyping up the fight, which gave everyone a glimpse of what is coming. The two men will fight on March 19th, 2022, from inside the Dubai Duty-Free Tennis stadium in the United Arab Emirates. For a long time, it seemed like the fight would never come to fruition, but now it is closer than ever, and the buildup to the match has been fascinating.

The interactions between Björnsson and Hall are always on the verge of turning into something more serious, and today it did. Björnsson and Hall came to a pre-fight press conference and the official weigh-in. For the majority of the press conference, both men were very calm and answered the journalist’s questions. Although there was some trash talk, they remained undisturbed until Hall mentioned Björnsson’s mother.

However, at the end of the press conference, Björnsson and Hall quickly got engaged in a very raging conversation. The subject that started it was the unofficial face-off a few days ago. Their tempers were high as they teased each other for more than 20 minutes, and in a matter of seconds, they stood up and had to be separated.

As it started, Eddie Hall’s son has rushed away from the table as he was sitting right next to his father. Another family member was involved in the argument, but it came from Björnsson’s camp. Hafthor’s mother started shouting at Hall from across the room, which he quickly noted. Hall pointed out that he is not scared of him, unlike everyone else.

Once things calmed down, Björnsson called out Hall for his inappropriate behavior while his son was right there. Eddie Hall replied,

“My son doesn’t care. He thinks you’re a fu**ing knob head. Quiet your mom down as well.”

Björnsson took Hall’s words to heart and got enraged in a matter of seconds. As Björnsson is a humongous guy, it took multiple securities to stop him from coming close to Hall. However, Björnsson took the closest energy drink and tossed it in Hall’s direction. While they were taking Björnsson out of the room, Hall was sitting in his chair, completely unfazed.

You can watch the conflict at the 23-minute mark:

Both men were elite Strongman athletes in the past and easily weighed over 400 pounds. However, they have lost a significant amount of weight since then. This made their physiques much more aesthetically pleasing, but more importantly, it improved their health.

Following the weigh-in, Björnsson and Hall were instructed to do a 30-second stare-down. With their history of incidents, both men stood behind tables, with some additional separation between tables. They did not say a word, but Hall knocked his table over after the stare-down was finished.

You can watch the weigh-in here:

Related: Hafthor Björnsson Addresses The Eddie Hall Face-Off Incident Ahead Of Their Fight

Björnsson enters this match with more experience, having already fought three times. Most notably, he won against Devon Larratt, who filled in as a substitute for Eddie Hall. Hall was supposed to fight Björnsson, but tore his bicep just before the match.

Björnsson and Hall recently had an official face-off, which really revealed how they feel about this fight. It is obvious that the main two points of their beef come down to the 2017 WSM disagreement and the deadlift world record. They also took some words personally, as they both undermined each other’s greatest achievements.

Björnsson and Hall discussed a money charity wager between them for this match, but it ended up falling through. However, they agreed that the loser will have to get a tattoo of the winner’s name. Only two days are left, and everyone seems very excited about the match.