The rumors of the World's Scariest Man fighting The Rock expanded quickly, but there is more to it than it seems. 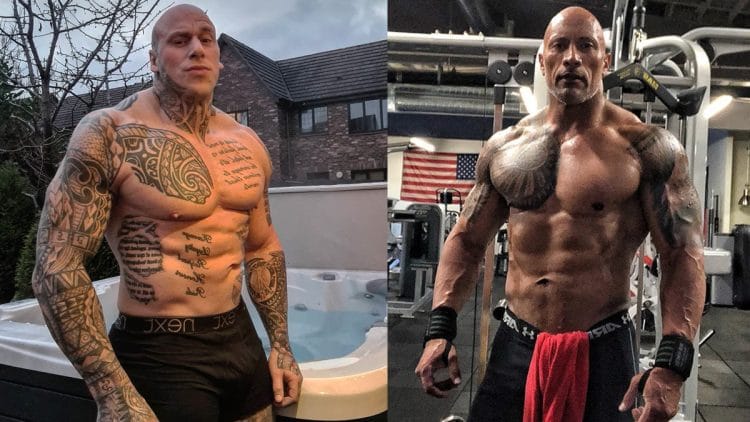 Martyn Ford vs The Rock - Image via @Therock @martynfordofficial Instag

Martyn Ford, also known as the World’s Scariest Man, has been in the media headlines a lot recently. There are a few reasons, but the main and most obvious one is his fight against the Iranian Hulk, which will happen on April 2nd inside the famous O2 Arena. However, recently there has been some talk about Martyn challenging one of the biggest celebrities in the world, which is Dwayne ‘The Rock’ Johnson.

A lot of fuss was about how The World’s Scariest Man wants to fight The Rock, but Martyn revealed that the previous reasoning was not fully complete. On February 18th, Martyn shared a post which featured a few articles about the fight and stated:

“You say one thing, and it kind of explodes .

I was asked, who would be your dream fight … There is only 1 for me, The Rock. For me, he is an idol, a legend and what he has and is achieving inspires me daily.

Why fight him? Because it would be UNREAL to share a ring, and the hype would be insane… he’s an incredible athlete, a winner, a grinder… it would be one hell of a showcase.

“World’s Scariest Man vs The Rock” would be a historic fight. In addition, it would be another clash of the titans, as Martyn Ford stands at 6ft 9in, and weighs in at 287 lbs (130.2 kg). Martyn has made a name for himself through bodybuilding and acting, and is most known for his role in the Fast and Furious 9.

Martyn also has previous experience in combat sports, as he has done MMA, Brazilian Jiu-Jitsu, and boxing for many years now. He also recently trained with a World Champion Kickboxer, Rico Verhoeven, and absorbed some valuable knowledge.

Dwayne ‘The Rock’ Johnson almost matches Martyn in size. He stands at 6ft 5in tall and weighs in at approximately 264.5 lbs (120 kg). The Rock was a very talented football player in college but didn’t make it to the NFL. He then started his wrestling career, which kick-started his career. This gave him a platform to get into acting and turned out to be the right move for him. The Rock is now one of the most famous people in the world, and his 298 million Instagram followers prove it.

The Rock spent 8 years in the WWE, and is familiar with several martial arts. Taking all this into consideration, their fight would be extremely interesting and suspenseful.

In terms of stats, Ford will have a distinct height and reach edge over Gharibi, being 7 inches taller. The Iranian Hulk, on the other hand, is 100 pounds heavier, despite his 6-foot 2-inch frame. Martyn Ford is 39 years old, whereas Sajad is ten years younger than him. A lot of factors will be significant for this match.

There have been rumors about a fight between the two for the past couple of years. In 2019, both guys signed contracts to an MMA fight in the Polish MMA promotion called KSW. However, this fight was canceled with no explanation why.

However, if Martyn Ford beats the Iranian Hulk, it could be a massive boost in his boxing career. Furthermore, it could enable him to set up his dream fight against The Rock.