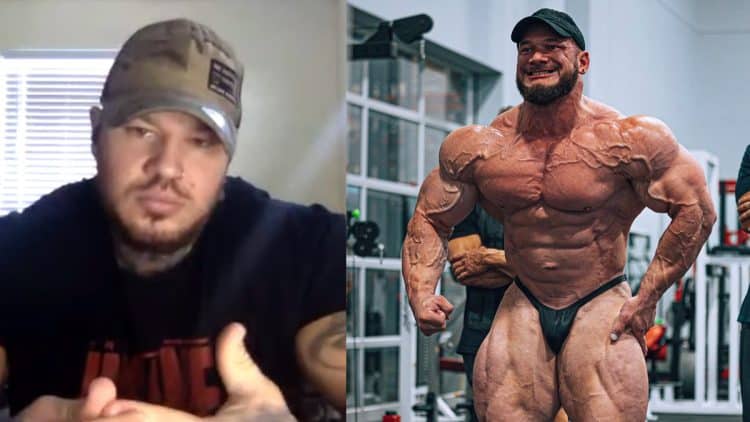 Ben Chow is recapping Hunter Labrada‘s seventh-place performance at last month’s 2022 Mr. Olympia contest. In a recent Bro Chat podcast, Chow shared some of the reasons why Hunter wasn’t at his all-time best when it was time to stand on the Olympia stage.

In December, the 2022 Mr. Olympia competition shuffled the Men’s Open division, which ended with Hadi Choopan being crowned champion. Many fans expected a showdown between Nick Walker and Hunter Labrada considering their history competing against each other. At 2021 Olympia, Hunter finished fourth and Nick fifth, respectively.

Hunter and Nick teased a rematch throughout last year’s contest prep and off-season. However, unlike his 2021 showing, Hunter Labrada wasn’t able to make the first call-out a few weeks ago. As a result, Labrada ended up taking seventh place — three spots down from the last time he had attempted Olympia. Meanwhile, his friendly rival Walker improved to third place and was also honored with the Olympia People’s Champ Award.

Reflecting on the outcome, Hunter left Sin City optimistic about his bodybuilding future. He plans to use the experience as motivation. The latest from the Labrada team to recap his performance is coach Ben Chow, who helped prepare Hunter for his third Olympia competition.

Ben Chow Talks ‘Errors’ During Hunter Labrada’s 2022 Olympia Prep: ‘We Held Him Heavy for Too Long’

According to Ben Chow, there were ‘errors’ with the overall prep and the peak of Hunter Labrada.

“The good thing with Hunter, we spoke a good bunch since [2022 Olympia]. The first conversation we really had about the actual Olympia, we both took ownership of not [being] happy with how things played out. Forget the placing, we wanted a better look. We had a better look, on that first day in the evening.

There are two things really to address in this: one the prep overall and then two, the peak. And there were a couple of things within both of those that could have been done better. The timing and pacing of things probably wasn’t the best, we were holding him heavy for quite a while, like six weeks out. I think we should have been moving him along a little quicker than that,” says Ben Chow.

Chow explained that Hunter’s long off-season could have contributed to problems during the prep/peak.

“Then, we had to drag him down — probably a bit too much from six weeks to a week out, so, that was probably an error in the pacing of things. It was a long off-season and that makes things trickier — the body doesn’t always respond as you anticipate it to.”

“Realistically, that process should have happened across 10 weeks rather than four or five weeks. We had to pull him a little flatter than I wanted him to. There was a slight mistiming on it. Like I said, we view it as a team, as our error. Hunter is very – he treats himself like an athlete, he’s like, ‘you win some, you lose some,'” says Chow.

Chow specified that keeping Hunter’s back full was one of their biggest challenges during prep for 2022 Olympia.

“Everyone wants perfection every time. Whilst that would be nice and that’s what we’re aiming for — sorry to disappoint you,” Chow said. “I would much prefer and feel safer going hard earlier in the prep — front load the first eight weeks, get them in shape and go from there.

And that’s something I didn’t do with Hunter because I wanted to hold on to that back. The back was one of my main drivers. I knew he could drop body fat quick, but we sacrificed some of that fullness. I feel like if we would have done it earlier on, it would have worked out better for us.”

Hunter wasn’t the only returning contender who dropped out of the top four. Former two-time Mr. Olympia Mamdouh ‘Big Ramy’ Elssbiay shockingly ended the show in fifth place. The last time a reigning champion endured a drop like that was Samir Bannout nearly 40 years ago at 1984 Mr. Olympia.

While Hunter wasn’t able to improve from 2021, he at least held his own during one of the more competitive Mr. Olympias in the last few years. Since Labrada wasn’t in the top five at 2022 Olympia, he’ll have to win a pro show to qualify for the 2023 Olympia, scheduled to take place in the first week of November.